Do you ever look at your toddler and think to yourself “Clearly, this child is insane.”?

Like somewhere between 14 months and 2.5 years, some critical brain component just shut right down and now, well, now you’ve just got the leftover nutcase.

You know what the worst part of my insane toddler is? I used to think insane toddlers were the result of bad parenting, since my first two toddlers were all calm and easy-going and NOT LAUNCHING THEMSELVES OUT OF THEIR CRIBS at 5am, after removing all of their clothes and diaper and squealing “MAMA! You gotta get up! I pooped!”

And only one of those things is actually true. I have to get up. That’s true. But you didn’t just poop. That’s a lie, Georgia.

The thing is, the kid lies all the time. She tells everybody she’s five. And a boy. She’s a five-year-old BOY. Ask her. Try to argue with her.

But that’s cute, right? Of course it is. Well, “of course it is” unless you’re one of those weirdos who can’t get behind some good old-fashioned gender-bending. And of course that’s the person who says to your daughter “You’re a big girl!” to which the girl scowls and declares “I’m a big BOYl!!” and the anti-gender-bender looks at you like you’re some sort of child abuser and you’re like “Look, dude, I didn’t do it.”

She decided she was a five-year-old boy and now she demands to be dressed in monster-truck, car and airplane shirts, but she calls them her “princess shirts.”

So, yeah. Our 5-year-old princess boy in a monster truck shirt is cute as hell, but really, really freaking annoying sometimes and, as far as I can tell, insane. I’m pretty sure the kid has paranoid delusions. She’s sitting there playing with her toys. Rocket sits down like 2 feet away playing with HIS toys. She gives him a sly glance, all suspicious and shit, trying to size him up to determine what sort of threat he poses to her general well-being.

Suddenly she launches herself at him: “That’s MY TOY!!!!!”

And he’s like “Wait. What just happened? Why is this blonde psycho coming at my head?” but it’s too late because she’s decided he’s out to get her and there’s no turning back and one must defend oneself against the threats of elder siblings, so clearly the only thing to do is wail and scream and flip the fuck out because there’s this boy and he’s IN MY SPACE and those are MY TOYS and if he DOESN’T MOVE I’M GOING TO DIE.

Or let’s talk about food.

Me: “Georgie. Here are some grapes for you.”

Me, not feeling like fighting: “Okay, whatever dude.” And, making her a new bowl of grapes: “Here.” Then I give the first bowl to Rocket.

G: “HE TOOK MY GRAPES! Those are my grapes!!! Rocket took my grapes!!”

And then, chucking herself on the ground, a 20-minute tantrum ensues, while the rest of the family looks on in utter disbelief, and you remember why you can’t ever, EVER cater to two-year-olds. But my lord, both options just suck SO BAD, and often result in the same damn outcome.

Option 1: Do not cater to toddler’s demands. Endure tantrum.

So I guess Option 1 is better, but seriously people. That kid cried so hard this morning over a piece of fucking toast that she made herself vomit. And I’m all “Use your words. I’ll discuss this with you when you calm down.” And she just keeps on screaming.

On and on and on. And I’m not sure I can take it. So I put her in her room and ignore her for 15 minutes, reminding myself that if you don’t acknowledge the tantrums, eventually they’ll stop. OR WHATEVER THE FUCK. The best part is that if you read parenting articles on tantrums, they’ll give you all sorts of “helpful tactics,” but in the moment, it’s all I can do not to launch myself into oncoming traffic.

The kid flips like a switch. One second she’s fine, the next second she’ morphed into a flailing ball of squealing crazy and you’re like “My goodness it sure is fun being a mother.” I sure wish I could have like nine more kids.

And toddlers are fucking insane.

It’s amazing mothers don’t emerge from this gig with PTSD. Seriously. How do we survive this nonsense?

Well, I guess this crap helps…for a minute, at least…I mean she’s wearing a MASK and CAPE. 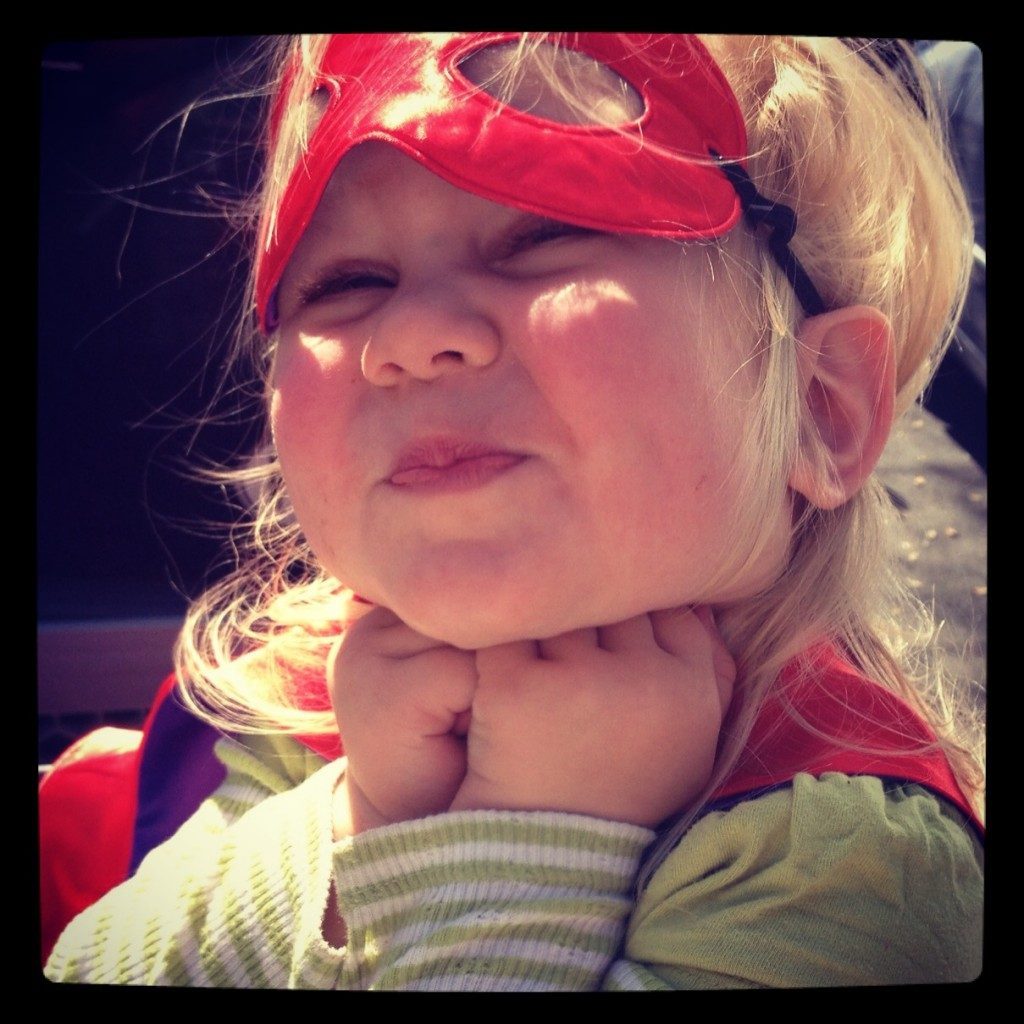 Tidy houses are not a thing so stop it
So this is what a toddler acts like.
If you tilt your head to one side and squint, my yelling will look like "gratefulness"
Share597
Tweet
Pin1
Email
598 Shares
35 Comments | Posted in bitching about the kids I chose to have. | April 4, 2013

What's the story you have to tell? - https://mailchi.mp/renegademothering/whats-the-story-you-have-to-tell