Posts Filed Under cohabitating with a man.

You knew this one was coming. This is the post where I complain about my husband’s cleaning habits. Or lack thereof. Allow me to clarify for a moment that I know men exist on this planet who are neat and tidy and generally interested in hygeine and order, but, as I said this post (but in reference to my son), I don’t have one of those. I have a husband who, wonderful as he is (and he is), falls more in line with the stereotypical dude who “cleans” a room for 30 minutes yet somehow manages to leave it looking oddly similar to the way it looked before.

This used to bother me.

Ah, shit. Let’s be honest. It still bothers me. But I’ve found some peace with it, or I’ve resigned myself. Either way, I don’t flip out about it as often. My new perspective came in the form of a conversation with my midwife. By the way, undoubtedly one of the finest features of having a homebirth is the visiting that occurs during pregnancy. It’s simply magnificent. A midwife comes to your house and listens to you bitch for at least one hour.  She measures your belly and does the pee-in-a-cup thing and listens to the baby’s heartbeat, etc., but then she just talks with you – not  about more tests or the 75,000 things that could go wrong at this point, or how you’ve gained too much weight or your belly is 1/8 of an inch too small or whatever…but just chats. And if she’s like mine, this woman will be strong and straight-forward, wise and maternal in an earthy, connected way – not frivolous or sappy, not old but not young – grounded and real. She’s a badass who’s seen it all and knows it all without knowing it all (if you know what I mean) . This is obviously another blog post. Forgive me, my mind is like a lost puppy on steroids.

So Tosi (the midwife) and I were sitting on my couch chatting and as usual I commence whining about how my husband must have some sort of mental defect because he appears incapable of cleaning. What an ass that man…he doesn’t respect my wishes and he obviously doesn’t care about me at all because I come home from work and I’m pregnant and need help but the living room is thrashed and he’s just kickin’ it all happy and calm with the kids. Blahdeeblahblahh. She listened and then said something so profound it floored me: “Yeah, some men are funny that way – they see things differently. You know, Mac isn’t looking at the mess and thinking ‘you know what? I’m not cleaning that. I’m leaving it for Janelle.’ He’s looking at the mess and thinking ‘that looks fine.’”

So I tested it out. One night we were sitting in the aforementioned living room and there was crap everywhere (including, but not limited to: toys, folded laundry, dirty laundry, shoes, books, school papers, shopping bags, blankets, books, socks, dishes, bugs, bark, rocks – when I say ‘crap everywhere’ I actually mean it) and I’m crawling out of my skin and about to FLIP the hell out – yet somehow he’s so calm he looks like he could be sitting in a Zen meditation room. So I ask him: “Honey. Okay. Seriously. Right now, sitting here in this room, does this mess bother you at all?” And he looks around a little confused. Then asks “what mess?”

Sweet Jesus. I couldn’t make this up.

And I realized that Tosi was right. He’s not mean and selfish. He has an inborn vision problem that causes him to see messes as neatness. Poor guys deserves compassion. (Unless there’s a recovery group for that sort of problem – Slobs Anonymous perhaps? – People for the Ethical Treatment of Housing?). Okay. Anyway.

So now I know that I have to give specific tasks and explain very carefully what needs to be done around the house, making sure I don’t leave anything up for interpretation and, even more importantly, making sure I don’t assume that something is so obvious there’s no reason to mention it…I recall somebody telling me once that she instructed her husband to move a load of laundry from the washer to the dryer. So he did. She didn’t say “turn it on.” And my sister-in-law told me recently that she had to explain to her boyfriend that after he takes the trash out, it’s critical that he insert a new bag.

But now I kind of just laugh at my husband’s creative techniques. Kind of. In between fits of hysteria. Recently I’ve noticed that right outside our bedroom door, in the hallway but still kind of right at the threshold, there’s this pile of clothing that never seems to move. Well, I move it. But then it comes back. Pretty much every day it comes right back, not unlike my children. So I inspect the pile one day and see that they appear to be Mac’s running clothes. (yeah, he decides he’s getting “fat” so he runs for 2 weeks, at which time he ceases, because he’s already lost 18 pounds and an entire waist size. UNCOOL.). So I ask him, actually chuckling, “sweet angel heart love kitten, why do you put your running clothes in our doorway every day?”

And he responds “well, since I run at 5 in the morning and it’s dark, I didn’t want to wake you up by turning on the bedroom light and finding my clothes.”

See what I mean? Wonderful. How do you get mad at that? It’s so damn cute. And thoughtful. He’s always been a much kinder person than I am. I probably would have flipped on the light purposely and crashed around a bit just to wake him up so he can see how hard I’m working.

So I gave him a kiss and suggested that perhaps he keep them in the same drawer, so he can just open it and grab the contents in the morning. No light required.

He seemed impressed by my ingenuity. But now there’s an ironing board in the hallway where the clothes used to be.

Oh well. One thing at a time I guess. 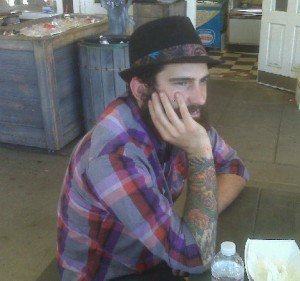