Pardon Me, but there’s vomit on your Chanel

A few weeks ago I joined Twitter. I know. I know. But if I’m going to make the effort to write the damn blog, I need people to actually read it. Therefore, I’m like totally into social media (hair flip, valley girl accent). Anyway I have been seriously amused by the Twitter bios. If you’re not familiar, I’ll explain: you have 140 characters or some other nonsense to write a little bio, and it shows up next to your ‘avatar’ (profile picture), all of which is intended to catch people’s interest so they’ll ‘follow’ you. Whatever. I didn’t make it up.

So you scroll down the list of prospects and click on people who seem interesting or like-minded or whatever you’re into and it kills me the stuff people put up there. There are of course the born-agains, the sober people, the shock-factor people (“anarchist mother of two who yearns to piss you off and eat your young”), the granola moms with their damn acronyms ( SAHM, BF, CD-ing, AP, NoVax), and the ones who are ooooo sooooo baddddd (“I drink whiskey, have tattooed arms and say fuck a lot.'”). But lately my favorites are the fancy and [evidently] well-dressed women who write things like “fashion savvy mother of two” or “hip mama in stilettos” or “fashion-conscious San Diego mother of four. You’ll find me drinking cabernet in my Chanel.”

Now I have nothing against these women. I just can’t for the life of me understand how they do it. I mean, the sheer logistics of my life negate any possibility of my wearing $600 sweaters. Or stilettos.

First of all, my day almost always involves some sort of bodily related emission ranging from drool to breast-milk to things I’d rather not discuss. And I think I’d be really disturbed if indeed there was vomit on my Chanel. Or maybe part of wearing Chanel is the ability to afford Chanel, which brings me to another reason I wear Old Navy…finances. No need to expand that topic. Speaking of expanding, let’s be honest, I’m too fat for designer clothes. Yeah. Some of us missed the memo about exercising after childbirth. [I do, however, breastfeed a lot, which I hear burns about 12,000 calories a day, so I should be covered.] But even if I had money and a life without random excretions and they made fat people Gucci, who the hell has time for that kind of effort?

Now don’t get me wrong. I have standards. I shower. I wear clean clothes. Mostly. And if I don’t have any, I very carefully sift through the hamper, thoughtfully contemplating my choices until I locate something without visible stains or an overtly unpleasant aroma. I mean that can take a while. And I absolutely draw the line at wearing maternity clothing past 7 months post-partum. I only wear flip-flops in light rainstorms and I’m perfectly willing to iron a piece of clothing for a special event. Like a wedding. Or a funeral. Of somebody I really care about.

Perhaps they are experiencing some other version of motherhood.

Or maybe they aren’t. In that case, I kind of admire them. Though I think it’s a little obnoxious to walk around flaunting one’s thinness and general health etc. by looking all hot with a 2-month old, I think it’s pretty cool when women take care of themselves for real after having a baby. Most of us generally feel like we’ve been hit by a Mack truck after giving birth and this feeling sort of continues for, oh, I don’t know, forever. And our appearances may reflect this feeling.

Plus, if you’re like me, you look back on your “pre-baby” days as your “hot days” – and, since that ship has sailed (far far FAR away, replaced by, well, not hotness), you figure you might as well stop trying. And since most of us don’t have a nanny, cook, housekeeper (or three), rich-ass husband or even the inclination to drop thousands of dollars on fancy labeled clothing, the statement “Pardon me, but there’s vomit on your Chanel” probably won’t be sent our direction anytime soon. However, most of us are able to put a little thought and time into ourselves, in whatever way we like to put time and thought into ourselves, and I think there is real value in this, in taking care of oneself before being expected to take care of others.

So here’s to my version of Chanel and stilettos, and yours, whatever that looks like.

Because I’m good enough and smart enough and gosh darn it, people like me. 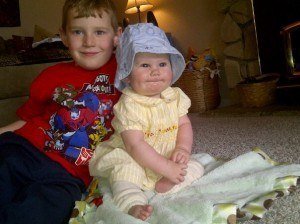 plotting ways to stain my clothes

Also being unable to leave a job that’s sucking the soul right outta your body because you can’t insure your kids otherwise.

Fascinating - I asked many @SenSanders supporters about their unions’ concern about Medicare for All. They told me yes, they have good insurance now but what if they lose their jobs? And they have friends and family w/o jobs (NV jobless rate is higher than national average)