so did I mention I have an infant…

It occurred to me that I spend a lot of time writing about Ava and Rocket and Mac and my domestic deficiencies and the laundry pile and mean people, but I rarely write anything about my 7-month-old, Georgia, other than passing mentions of her unceasing adorableness. Since I am motivated mainly by guilt and/or discomfort, I thought I’d better write one quickly before she starts getting hurt feelings through osmosis or something, as she gnaws on my laptop.

I wrote her birth story here, but there aren’t many posts devoted to her and my experience mothering her. I guess that’s kind of weird. Or maybe, since she’s my third child, it isn’t weird at all – because she’s the easy one. I know she’s just a baby, doing baby things, and really, babies are pretty simple.  Time-consuming, draining and insanely demanding? Yes. Complicated and confusing? Not so much. As long as it’s your third. With Ava, my first, I could have written 12,000 word daily blog posts about the myriad emotions, fears and anxieties I had swirling in my pretty little new mother head – but that was me struggling with becoming a mother. That was me navigating the whole thing. It had nothing to do with her. She was just being a baby, doing perfect baby things, just as she should.

And just as Georgia is doing now.

Georgia is endlessly lovely. She’s perfect. And I don’t mean that figuratively. I mean it literally – she is perfect as all babies are perfect. She isn’t old enough to irritate me with attitude or stubbornness or headstrong defiance like those two other short people in my house. She doesn’t lie or get dramatic or tie shit together or blatantly ignore me or hurt my feelings or say “whatever” when I say something I thought was pretty insightful.  She still thinks I’m funny and can’t escape when I snuggle her.  She’s a baby. She has needs and she’s vocal about it – but she doesn’t mess with my insides. Mothering her is simple: pick her up when she cries, let her nurse, change her diaper, set her down, hand her to somebody when I need a break, wash between the fat rolls. Kiss often. Smell head. Repeat.

But don’t get me wrong. She does stuff. She’s very busy.

For example, she nurses a lot. She sucks on my nose occasionally. She goes to the bathroom with startling regularity. She’s contemplating crawling but, like her siblings, is in no hurry there. She wakes up at inconvenient times, but does so smiling, delighted to see me, her face exploding with dimples and her sweet sweet breath revives me, her little legs kick in tune with her laughter and fat little hands hold my face when I get close and I’m glad she’s awake because she’s my baby. And she is perfect and that thing I was trying to do? Not important. In twelve seconds this baby will morph into a real kid and I’ll no longer be able to fix all her problems with my boob.

She has some favorite pastimes: watching her older siblings, attempting to grab sharp shiny objects with scandalous quickness, moving her tongue around her mouth. Probably her favorite game though is the “show mama’s nipple to strangers game,” where she nurses for a minute then flips her head the other way to see what her brother is up to.  If the timing is right, when she flips off, the milk will be coming down and will spray her on her cheek, and everybody at the Tee Ball game will see nipple.  It’s a win-win. This is also a favorite game of Rocket.

Rocket’s interest in my boobs and their accompanying milk is either cute or disturbing.

Georgia also likes saying “ra ra ra” and “bah bah bah” and “mamamamama” – but being that this is my third kid, I know those aren’t actual words. She smiles approximately 85% of the time she’s awake and that is not an exaggeration. In fact, at times it can get a little irritating. Once, when I was trying to get a good yell on with Mac and I was really pissed and trying to make a point (damnit!), she was in his arms and she was looking right into my eyes, with that locked-in, unswerving baby eye contact intensity,  just grinning grinning grinning and it took the power right out of my angry stance and attitude — frankly it made me just look like an idiot, standing there trying to be effective with a  little baby just totally not getting it, delighted by my over-dramatizations, smitten and joyful by my mere presence – smiling at her mother. Talk about putting shit into perspective.

We should do that with world leaders when they’re contemplating war. Put a few babies on the conference room table and see what they decide.

She also has some very clearly delineated likes and dislikes.

She likes being naked, taking baths, chewing on her feet and blowing raspberries. She likes her brother and sister a lot and she likes sleeping on her daddy’s chest. She likes finding things on the carpet that could choke her and lunging for them. She dislikes the most expensive baby toys in the basket. She dislikes the vacuum, which thankfully isn’t much of a problem.  She’d rather not ever have new clothes put on her, and occasionally the car seat is viewed as an unforgiving torture device, but most of the time this baby likes to smile and nurse. I don’t know why she’s so mellow. When you look at her she laughs. When anybody walks into the room she laughs. When you hold her spoon up or bring her her favorite toy she laughs. She grins so big her eyes nearly squint shut. She likes moving toys back and forth between her hands.

Oh, and she likes nursing. Did I mention that?

It’s strange, how this baby is such a wholly unique experience. If it wasn’t so damn hard, I’d recommend to all new mothers that they just quickly get babies 1 and 2 out of the way so they can get to the third, which they may actually enjoy. I cannot put into words how different it is, this third kid – because I don’t have postpartum depression and my life is more grounded and Mac and I have accepted each other’s defects and I know she’ll be okay.

And that I’ll be okay.

And that this is without a doubt the time I will reflect upon for the rest of my life when Georgia becomes Rocket, then Ava, and the baby stage? It’s alright.

No, that’s the wrong word.

And there’s joy in that simplicity. 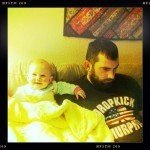 yeah. just hanging out with my dad. 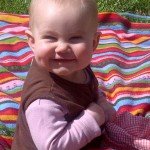 see what I mean?

this week...I fell off a diet, and was thinking of my mom
What I learned this week…another camping trip kicks my ass
I understand why women don't run.
Share23
Tweet
Pin
Email
23 Shares
19 Comments | Posted in Sometimes, I'm all deep and shit..... | March 29, 2011