In an act that feels so wildly foreign to me I can hardly utter the words, I am going to start a weekly post called “Exploding Good Shit” (because that’s the name that just came to me right this second). But now I’m realizing it’s a bit of an ambiguous title because am I exploding good shit or is good shit exploding?

Some mysteries must carry on unsolved, I guess.

Anyway for the rest of the year and maybe beyond, I’m going to post the good shit I encounter each week. It will be on Sundays but don’t hold me to that because this is the first one and I’m pretty sure it’s not Sunday.

Now, why the fuck would I take this journey through Optimism Valley where decidedly better people live? Gratitude Canyon where the yogis sit full lotus?

Because for two weeks the only post that came into my mind was writing BURN THIS MOTHERFUCKER TO THE GROUND 200 times in a row.

I could be wrong, but I think that’s a problem, and it doesn’t offer much, you know, in terms of actual helpfulness or insight. Not that we always need to be “helpful.” Sometimes a solid rant is in order.

But lately I usually find myself in two conditions: directionless rage or resigned desperation. Neither of these are places from which a person can create, or live dynamically, or be helpful to anyone, or move forward at all.

“I think hard times are coming when we will be wanting the voices of writers who can see alternatives to how we live now and can see through our fear-stricken society and its obsessive technologies to other ways of being, and even imagine some real grounds for hope. We will need writers who can remember freedom. Poets, visionaries — the realists of a larger reality…”

We have to remember this right now more than ever, that if we can’t see new paths, if we can’t forge new alliances, if we can’t break through the patterns of our pasts, we are destined for more of the same.

This sounds like a bunch of kumbaya shit, doesn’t it? It sounds like a Band-Aid over a gaping wound, but I don’t think it works like that, because if we want to be bringers of a new reality, we better fucking stay reminded of the beauty that’s here, now, the kind that’s possible, so we can imagine the kind that feels impossible.

Nobody has ever had more than the shit-show of the time they were living in, and yet, humans have progressed.

Sort of. THERE I GO AGAIN WITH THAT NEGATIVITY.

No but seriously. Think about it. Nobody living through war, genocide, nondescript universal social depravity, et fucking cetera, could see the future. They didn’t know whether or not it would end. They had to hold onto a vision they couldn’t quite form. They had to refuse to accept “today” as the ultimate end.

This isn’t about vapid “be thankful/happy/optimistic” declarations from my greater self. I spend half my life looking for my greater self and wondering if she exists at all. That motherfucker is wily.

For me, and maybe for you, it’s a reminder that even though we still think voting will save us despite the fact that the GOP now has even more free rein to suppress votes and this will continue for possible generations and Trump is still having his Mein Kampf rallies and Melania thinks she’s the most bullied person in the world and OH RIGHT the greatest threat to humanity agreed upon by like 96% of the world’s scientists is deemed a “hoax” by the regime in power, who surely isn’t just looking out for the corporations they deem people, focusing instead on more massive tax cuts for their billionaire friends and oh yeah it’s a dangerous time to be a man and a murderous dictator is in love with our dictator who prefers to kill people via removal of healthcare, and…yeah…where was I?

My commitment to weekly unbridled joy posts is a reminder that none of that is ever all there is and that we can go all the way there, all the way into that mess, but we can’t stay there.

We have stay in all of it. We have to be aware, but to all the things.

There are wild, ridiculous, beautiful things happening. There’s hilarity in the world, utter joy. There are people changing their immediate worlds, people pushing the boundaries of what’s around them. People contributing in tangible, real ways.

There are people living their lives in the wide-open.

And we get to be here.

I want to not forget to be here, too. In this world that offers us so much laughter and love and people doing really cool shit. Everyday people.

Because otherwise, we’ll be crushed. We can’t get crushed.

1. This text exchange with my 16-year-old 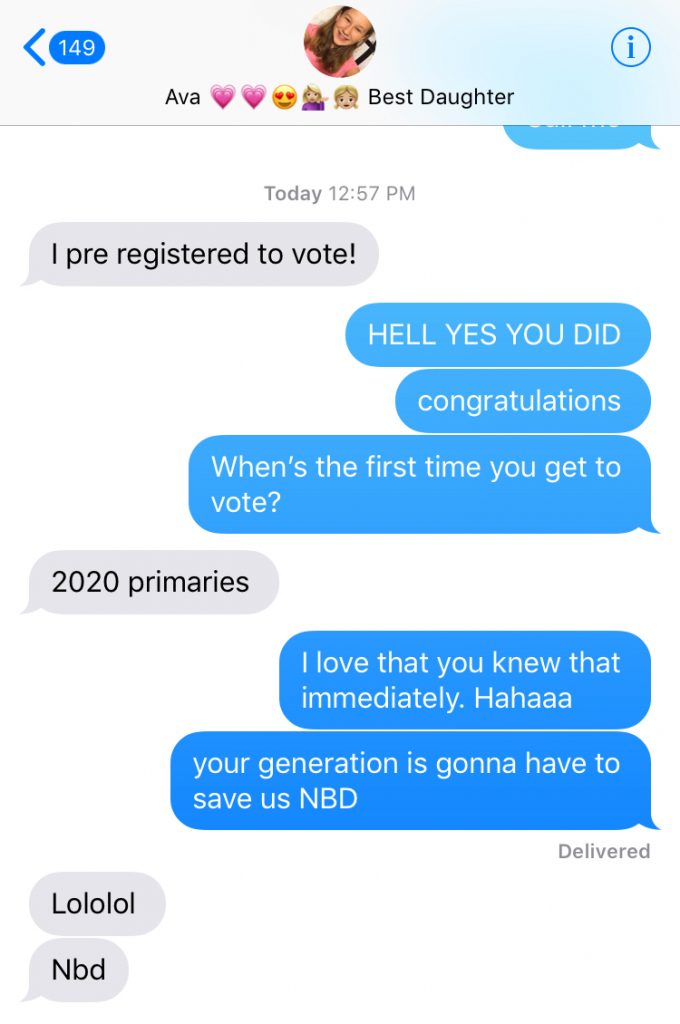 2. My friend Natasha Nicholes is turning her world green and when I read this article about her I think I may have cried just one tear. Don’t tell anyone. 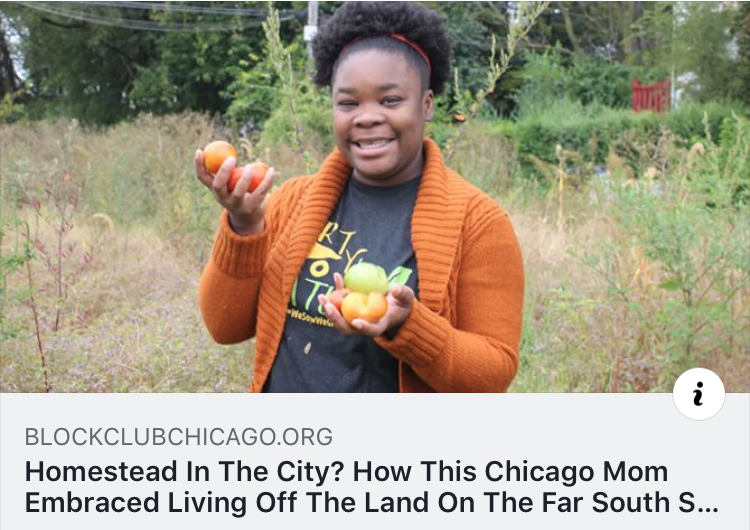 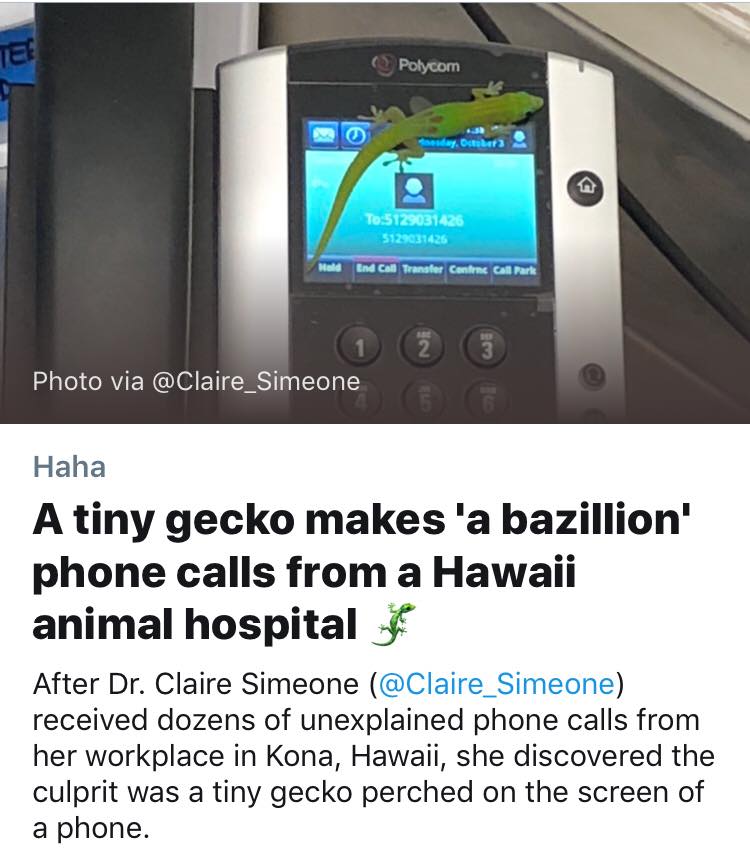 4. Mac completed a Spartan race with one of his best friends. He wore this tank top and was a little disappointed it wasn’t tighter. 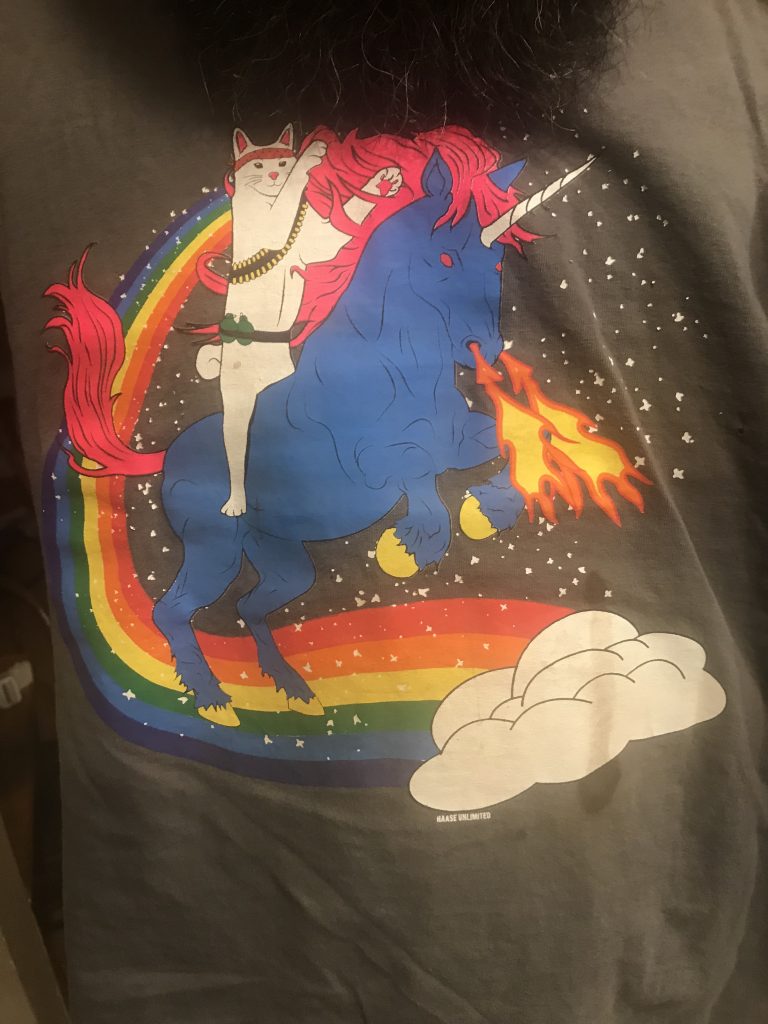 5. My friend Lisa celebrated thirty one years of sobriety. Here we are on a tiny plane in Canada trying not to die. 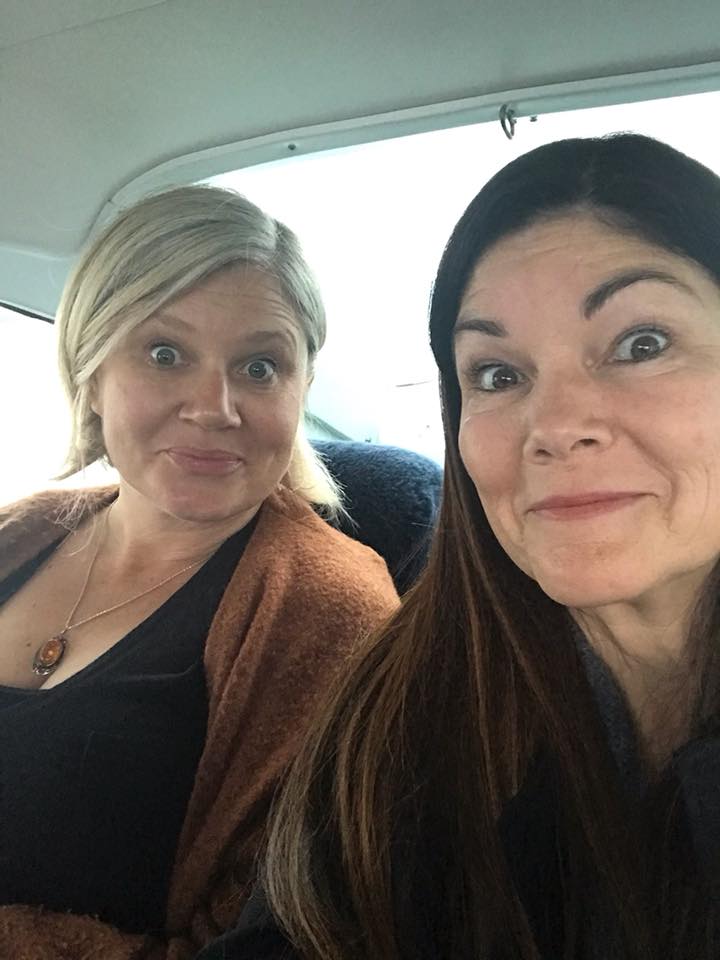 6. This whole interview with Fran Lebowitz but particularly this line:

“Not everybody’s opinion is worth listening to!”

7. The U.S. poet laureate, Tracy K. Smith, is going to read us poetry for five minutes a day in a new podcast called “The Slowdown,” starting in November. 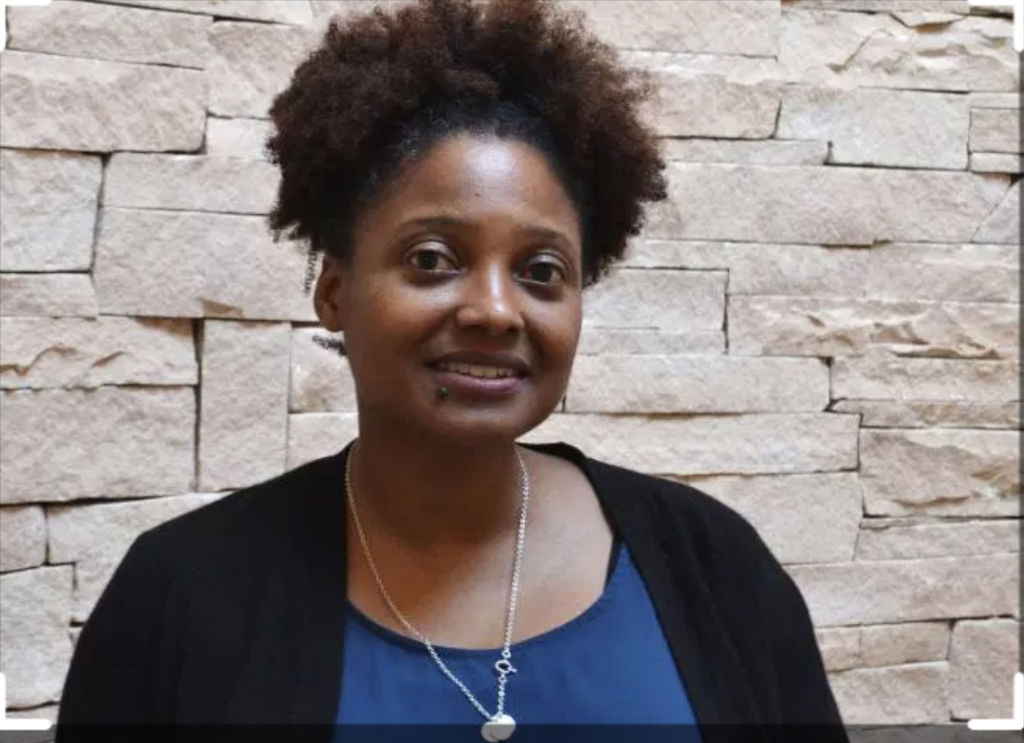 8. This guy singing Jerry in his dirty work pants

9. The annual pumpkin patch challenge is underway and at patch #3 George was so pissed at one point she refused to look at me. Ava is holding her fake sign, because we keep forgetting our letterboard. We don’t own a letterboard. 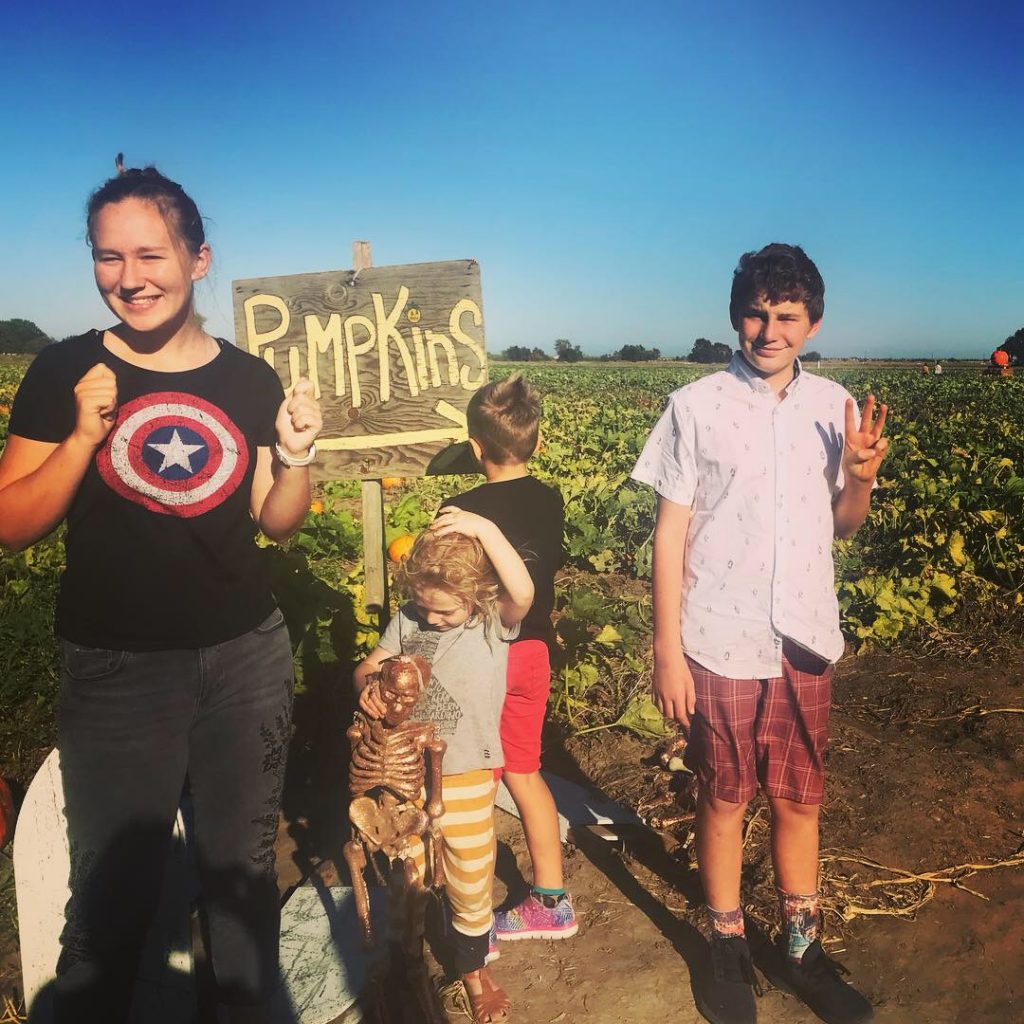 10. My wild and beautiful friend Sarah released a punk album with her friends in Oakland and the band is called Nasty Pussy. (This was a few weeks ago but it’s still one of the best things to happen to me this year.) Don’t miss the lullaby anthem “Little Donny.” 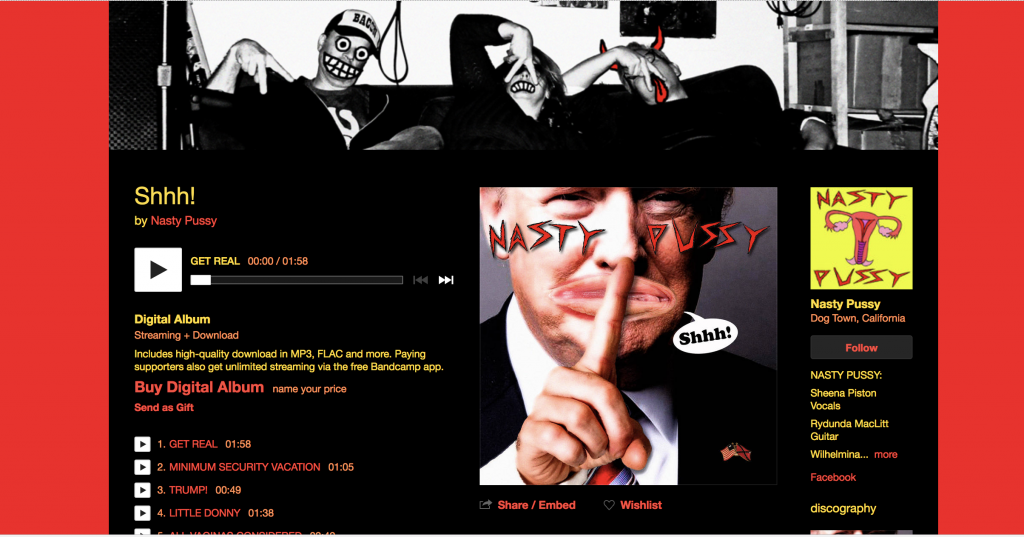 If you have something you want to say but aren’t saying, YOU SHOULD FUCKING SAY IT WE NEED YOU.

Sorry for yelling. What I meant to say was: “Consider taking my Write Anyway workshop this January.”

We spend six weeks writing, and dismantling the nonsense in our brains that keeps us from writing the things we really want to write.

I can’t make that shit go away. But I can help you lose faith in it.

I made this workshop for the person who:

I hope you join us. I built a whole career out of saying things I’m afraid to say. Thank god fear can’t stop our fingers from moving.