Do they ever stop talking? EVER?

So yesterday I went out with the three kids. Mac was working (shocker), and I was feeling ambitious and altruistic, figuring “I can handle this. I’m a good mom.” Plus, if I’m OUT of my house I don’t have to deal with the mess IN my house.

So we went to breakfast. Then we went to a craft store to pick out fabric for curtains I’ll never actually sew, and we walked around the 2nd-hand baby store (where I bitched about the prices, realizing I can buy the same shit for cheaper at Old Navy and it’s NEW)…then we went to a couple other stores, then Costco.

And really the little hoodlums were pretty good. I mean they’re kids, so they can’t be THAT good, but for kids, they were alright.

“Mama, do you think it’s weird when girls talk about boys they like?”

“Mama, why are we going this way? Can’t we walk to the next store? Why can’t we walk? I wanna walk. We never walk ANYWHERE. Why do we never walk anywhere?”

“Mama, can we buy this wooden chest of drawers for my doll clothes?”

“Mama, I love it when I fart in my underwear.”

“Mama, Georgia has a booger.”

“Mama, you never buy us anything.”

“Mama, how do the police tell the bad guys from the good guys?”

“Mama, how did the Russian Revolution start?” (Yes, Ava actually asked that.)

“Mama, how come Hitler used gas on the Jews when  all the countries signed that agreement after World War I promising never to use gas again during war?” (and that too.)

Please give me a break. One break. Two minutes of silence.

Holy fuck do they EVER stop talking?

No. They don’t. They are relentless. I don’t think they breathe. They only talk.

When I’m with all three of them, there is always one of them making noise in my direction, needing me. Always.

Whether it’s whining or crying or wailing or squealing or talking…there’s always noise coming at me from the little people.

My husband can sit there and, by all appearances, not hear a single smidgen of it.

I on the other hand hear every single speck of chatter and feel compelled to answer each and every question they pose. [Unless it has to do with farts or poop or underwear. Most of those questions I let go unanswered, realizing the purpose is usually just to say the word “fart” or “poop” or “underwear” – any response being almost wholly irrelevant.]

I do okay at the beginning. But after a few hours…my Lord I’m tired of people talking at me. I’m an extrovert and all, but shit. Everybody’s got a limit.

And then I start giving one word answers and my daughter starts picking up on my impatience and I start feeling guilty so I try again but my heart’s not in it but they don’t stop because they actually physically cannot (by the way, is that some sort of ailment?)…so we just go on like that…forever….it’s all really quite a lovely little picture.

So I turn on music. Loud.

But they talk anyway. OVER THE MUSIC.

Sometimes I pretend I can’t hear them.

But they only TALK LOUDER.

Deep breaths. Mantras. “I am a rock in a stream.”

I tried telling them once about the Dalia Lama stating that “senseless chatter” was a bad thing, clouding the mind and separating us from our Buddha nature. While it appeared promising at first, that particular strategy backfired miserably when they started accusing me of “doing senseless chatter” almost every time I brought up a subject they didn’t feel like hearing. 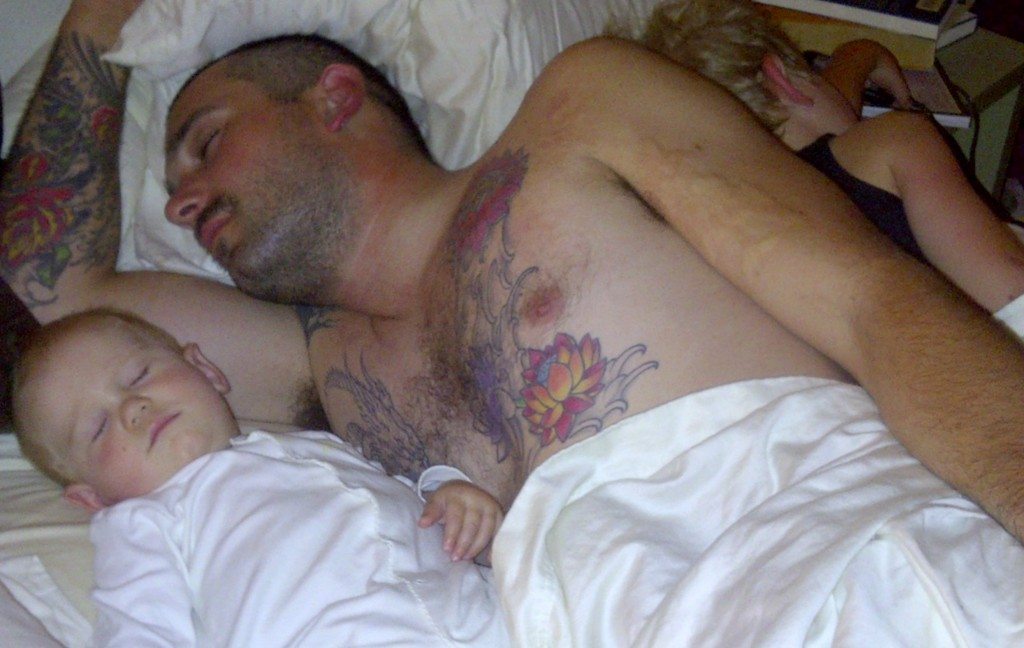 The only time I get any peace from the NOISE. Except wait a minute. Ava is not in this picture, which means she was probably with me. Talking. Talking to me. Talking to me endlessly. Shiiiiit.

what I learned this week: teepees, redwoods and pit-bull service dogs
circle time! (sad song. happy picture.)
Can we please talk about THAT THING?
Share635
Tweet
Pin
Email
635 Shares
30 Comments | Posted in bitching about the kids I chose to have., I HAVE NO IDEA WHAT I'M DOING HERE., Maybe my kids are the problem., Things I shouldn't say out loud let alone Publish on the Internet..., unenlightened parenting techniques. | July 30, 2011