Yesterday was Georgia’s first birthday. I can’t believe it. It seems like yesterday I was going through this to bring her into the world. It’s amazing the way the universe gives you what you need. Whether I know it or not at the time, I am learning what I need to learn, gaining what I need to gain, suffering in ways that will help me grow the insight or perspective or balls to face something that’s coming my way…

Georgia’s birth was like nothing I could have ever imagined. (Read about it HERE.) I could spend a whole page or a whole day attempting to explain to you what it felt like, what it was from my perspective, but my words would fall short; they wouldn’t come close to capturing the experience.

I suppose the closest thing I could say is this: I COULD NOT DO WHAT I ABSOLUTELY HAD TO DO. I did not have the power. I simply did not have it in me. I had reached my maximum. My height. The culmination of all my strength – I was giving it everything I had – and my baby was not coming out.

And YET, there was nobody else who could do this work.

So I stood in excruciating pain, facing a weird sort of existential moment: do something beyond my capacity, or die, I guess.

We weren’t on the brink of dying, at least I don’t think we were, although the cord was around her neck twice and she came out blue, so perhaps I “knew” something without knowing it. But it was all very black and white: To be free from this pain, I must do this. But I cannot.

I felt somewhere deep inside me that one of us was going to die if I didn’t make this happen.

My terror was beyond words. I felt I had fallen into an abyss of black but was powerless to crawl out. I wanted out. I just wanted it to end. I wanted some other reality. I wanted to ESCAPE.

But I could not.

But I’m going to die from this pain.

But I can’t make it end.

I have to make it end.

And I pushed that baby out. That baby who was “undeliverable”. That baby who was 10 pounds with a head cocked to one side and tilted up – a position that would have required a cesarean had I been in a hospital. She came out in such a weird position I thought her head was a rectangle as she was emerging – I remember thinking to myself as I touched her head “She has a rectangular head. Weird.” (That’s how out of it I was.)

But when was she born I was born.

When her body flooded pink with life, blood surged through my veins.

When she took her first breath in my arms she filled my lungs.

And I was ready.

Ready for that which I cannot do.

Ready for what it means to be the mother of three.

Ready for quitting my job without a safety net.

Ready to go back to school, follow my gut instead of my mind.

Ready to homeschool my son.

Ready for my life, that I didn’t know was my life…until now.

So thank you Georgia. Thank you, precious, sage little one.

You made me what I am. You showed me what I can do. You lifted me up. Made me a mother again. 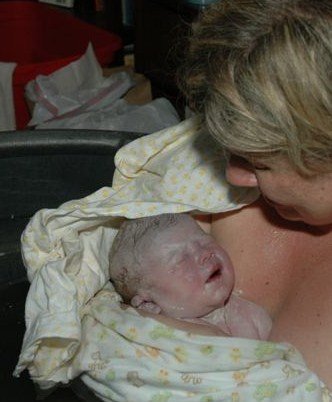