Parenting in the Gray Area

Sometimes, I know my kids are being really annoying. It’s like totally clear. For example, running in restaurants. Screaming in libraries. Beating on other children. Flailing in chairs at somebody else’s dinner table. Not saying “hello” when somebody walks in the room.

In these instances, it’s clear that I must engage, and I do so. I’ve heard of parents who never say “no” to their children, but instead find ways to lovingly accept whatever horrifying shit their kids are currently engaged in.

Yeah, I don’t do that. Maybe someday, after I’ve reached enlightenment, I will become one of those parents. Then again, maybe not.

I also know when my kids are not being annoying. Well, not THAT annoying (cause let’s be honest, they’re pretty much always somewhere on the spectrum). You know, those moments when they’re just hanging out, kids being kids. And maybe there’s volume and mess and chaos, and my delicate sensibilities are being assaulted, but nobody’s getting pummeled or maimed and they are clearly within the bounds of civility.

However, things are often not that simple, because, of course, there is the GRAY AREA.

To illustrate, I made a graph: 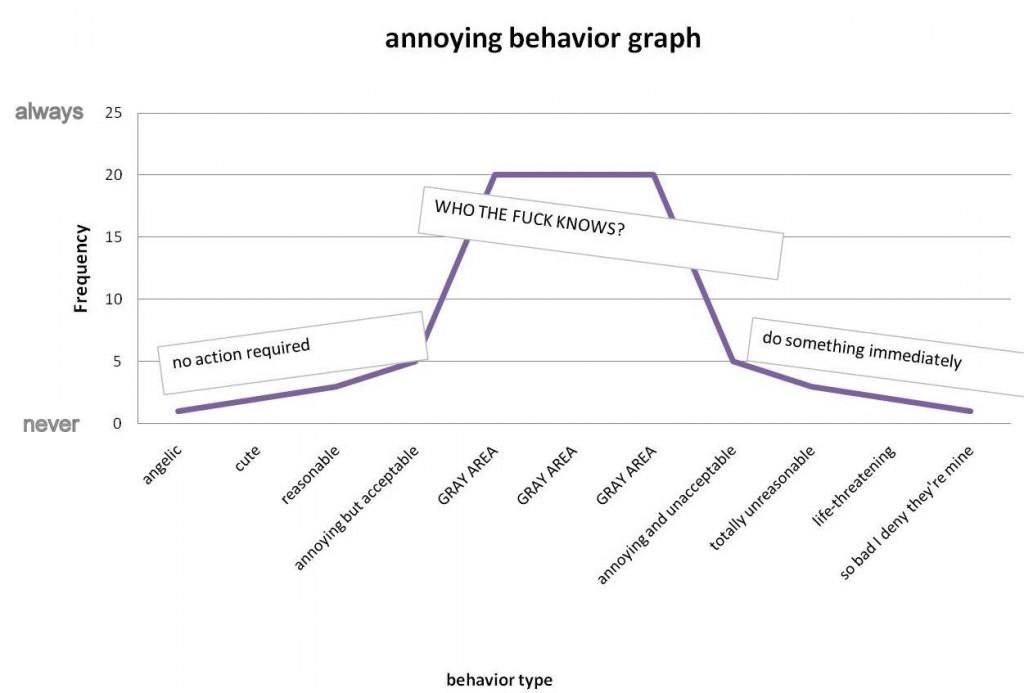 I hope that helped.

As you can see, my kids’ behavior generally falls into the Gray Area. Unfortunately, I have no idea how to parent in the gray area. I’m confused by the behavior that falls between acceptable and totally fucking unacceptable. For example, sitting at a table in a restaurant talking and eating is acceptable. Making straw wrapper spit wads and using your spoon to launch them at strangers is totally fucking unacceptable. However, what about making straw wrapper spit wads and launching them a few inches? Is that acceptable?

Running in a park is acceptable. Running in restaurants is totally fucking unacceptable. But what about running down hotel halls in the middle of the day?

Final example: Playing with toys in a friend’s living room is acceptable. Throwing those toys at their toddler’s head is totally fucking unacceptable. But what about rolling around on the living room floor loudly repeating Phineas and Ferb lines and squealing? Irritating, but perhaps acceptable. Clearly annoying people a little, but perhaps within the bounds of being a kid. Perhaps those adults need to mellow the hell out and realize kids are annoying.

You see, here’s the thing. I am not a parent who lets her kid do whatever he or she wants because I don’t want to squelch their inner child and creativity. Though I appreciate those sentiments, I don’t have the patience. Just keepin’ it real.

So I sometimes direct their behavior. I do. However, I am not a Nazi controller parent either, and well, yes, I guess it’s true, I don’t want to beat their inner child into subservience and eerily good-behavior. Perfectly behaved children scare me. I wonder how they got so contained, being that curiosity and exploration and messy discovery are the hallmarks of a kid being a kid. And perhaps, of all learning. I want my kids to push boundaries. Fuck the system. Rage against the machine.

Where the hell is the line? There is no line. There is only one giant obscure GRAY AREA with no discernible lines.

I think I need lines.

But there are none, and every time people attempt to draw them for me I get irritated and combative, like “who the fuck are you to tell me how to parent my kids?” I reject your lines!

It’s complicated being me.

And so I parent in the gray area. I kick it in the borderlands. The frontier.

Do I act? Do I redirect? Do I engage?

Do I step back and breathe, realizing I’m being impatient and intolerant and controlling?

Am I shoving my grown-up limitations and old-person tendencies on these children, blocking them from the freedom to learn and create and explore?

Or am I teaching them how to behave? How to be citizens? How to be sensitive to others?

Oh whatever. I don’t fucking know.

We watched a play about Tom Edison. In one of his childhood explorations he inadvertently burned down his family’s barn. Totally fucking unacceptable behavior.

And yet, he was learning about light, which eventually evolved into the invention of the light bulb.

Guess in that case, he illuminated the gray area.

the letter i had to write once
To the Childless People Wondering Why We're Such Losers
"This offends me!" Who cares? Nobody.
Share540
Tweet
Pin5
Email
545 Shares
36 Comments | Posted in .....I make bad decisions..., bitching about the kids I chose to have., Could this get me arrested????, self-esteem corner., Things I shouldn't say out loud let alone Publish on the Internet... | March 28, 2012