Poppy Harlow is a douchebag, and so are her friends.

Poppy Harlow, you’re a douchebag. And so are you, ­­Candy Crowley. And Lester Holt, thank YOU for your insightful words in response to the rape of a 16-year-old 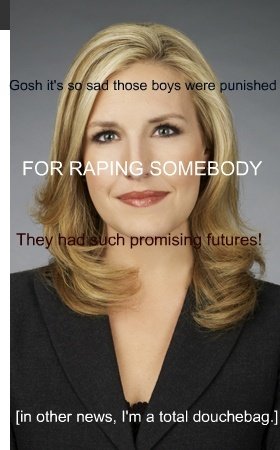 These people are a bigger threat to America than Caillou. FOR SURE.

girl in Steubenville, Ohio: “In many ways, tonight stands as a cautionary tale to a generation that has come of age in the era of social networking.”

Such a helpful message: IF YOU’RE GOING TO RAPE SOMEBODY, KIDS, DON’T VIDEO IT!

And let’s all lament their “promising football careers” and the “lasting effects of jail time” on boys so young.

I have an idea: If you don’t want to go to jail, don’t rape people.

And let’s emphasize how sorry these boys were and really, REALLY emphasize how drunk intoxicated out-of-her mind this victim was. Let’s make it clear that she made some seriously unladylike choices that put her in a position to be raped and THOSE POOR BOYS they were just BOYS being BOYS. I mean, what are they supposed to do when faced with an unprotected vagina?

Just for funsies, let’s play a little game. Let’s pretend the female who was raped was a male. Let’s pretend a 16-year-old boy got drunk, fell semi-conscious and was raped and urinated on by classmates, and it was video-taped and texted about.

WOULD WE BE RESPONDING DIFFERENTLY?

Wouldn’t the rapists be monsters, now? Wouldn’t they be sick fucks who took advantage of a person who was just having fun, just out for a little fun one night, like all teenagers do?

Think about it. I bet the media would have a very, very different reaction. Setting mainstream homophobia aside, it’s interesting to think about whether the focus on the victim “making bad choices” and “compromising oneself” would exist were the victim male. I mean if a girl gets drunk she’s potential rape material. If a boy gets drunk he’s having fun.

Here we go again with the same old narrative: it’s the woman’s fault.

And apparently, if you’re CNN or NBC or whatever, if you’re a boy who gets drunk and fingers a girl against her will and then urinates on her and slaps your penis against her hip in front of a bunch of people while she lies there half-unconscious, and you videotape it all and text about it and brag to your friends – well, you’re just a boy being a “boy” and it’s just fucking heart-wrenching when you get punished for your ILLEGAL behavior because WHAT ABOUT YOUR PROMISING FUTURE?

It’s really too bad they didn’t make it all the way to the big leagues, where they could rape women and get away with it! Yay!

Alright, to get away from sarcasm for a minute, when I first thought about these media outlets practically in mourning for the rapists, insinuating the classic “boys will be boys” rhetoric – I got all pissed off, like “how dare you call my son a rapist,” (which what they’re doing when they imply that all boys would be rendered powerless in the face of an unconscious female).

And I got all irate thinking about the way the media deployed the offenders as “just regular ol’ boys” doing boy things…rather than calling them what they are (individual monsters).

And I realized they are every boy. Or they were, at some point.

And they grew up, and they were told women are property and playthings, and that men are tough and sexually driven and the ones in charge, and they were shown every day that women are objects – tools to satisfy their desire. They were spoon-fed misogyny and the subjugation of women. They were built. They were structured. They were molded into the monsters that spoke of a “dead girl” getting “so raped.” Between fits of laughter they showed the world what they’d become.

I’m not saying they aren’t responsible. Obviously. They are undoubtedly horrible specimens of people and are wholly responsible for their crimes (um, do all boys grow up to be rapists? No, so clearly society isn’t the only problem here.) I’m glad they’re there, and I’d like to dropkick their football coach and the aforementioned idiotic media reps.

But it’s too easy to think they are just individual demons, that they’ve just made bad choices because they come from “bad stock” in a “backward town” in wherever the fuck – like the coach and their parents and classmates and local citizens are just an anomaly, a strange occurrence of twisted humanity, and we can all just fall back in our smug superiority, because we’re so much better, raising such better sons.

But check it out: when we dismiss them as exceptional, we ignore the systematic violence toward women being deployed every single day on a million different fronts.

And we ignore the systematic violence toward men being deployed every single day on a million different fronts.

Because we’re all dying here. If girls are sex objects, and men are the mindless victims of testosterone, unable to control themselves in the face of drunk female, it’s pretty clear to me that we’re all losing here.

Men are monsters. Women are the preyed upon.

But we’re all losing our humanity.

And when I look at my boy and my girl, I’m terrified that society is going to see them as a “boy” and a “girl,” with all that those labels involve, and it’s going to work to mold them into the crap of humanity we see on television on a daily basis. And on the streets. And everywhere.

I see my kids and I see humans who are going to walk along this earth like all the other humans who have ever been and ever will be, and I know it’s my job to teach them, teach them to be human. But I’m fooling myself if I think I’m all there is. Like my husband and family and I are it, like we can single-handedly negate every sick and twisted outside influence on our children.

As if I can fix a broken society by being a “good mother.”

There’s more to this story.

And we better figure out what it is, or we’re all going down.

It makes me sick to think about the whole thing: those boys raping that girl, laughing and giggling and bragging about it, the burden the victim will carry the rest of her life, the town and coach and media defending the rapists, offering their condolences to the criminals.

No, no they’re not. You’re a fucking criminal, and you deserve to be in jail, and my son and father and brother and husband would have kicked your ass if they saw your sad selves abusing that girl.

Or they’re women. WHATEVER. Call ’em what you want.

And that’s how we are.

Until we become something else, I guess.

The Bitch-Speak Translator [and other helpful tools]
Soule-Crushing Mama
To the "angry" women of the internet
Share1.12K
Tweet
Pin99
1.22K Shares
43 Comments | Posted in I'm going to get unfriended for this, or something | March 19, 2013

{new post} Mental space is as necessary as a "room of my own," but I find it's a lot harder to get.

Invisible labor and the 'small space' that's mine.

Alright, I'll admit it. I am having a rough time. Here’s what’s up: When I left California, I left the support network I’d built over 18 years to help me raise four kids and work as a writer. An...
View on Facebook
·Share

Wow, Twitter sucks right now. The left endlessly shit-slinging over who’s mean and whose supporters are the biggest assholes. Meanwhile there’s a fucking fascist in office. Honestly what is wrong with us.

New post on feeling erased by invisible labor and fighting for a mental “room of my own.”
https://www.renegademothering.com/2020/01/20/motherhood_invisible_labor/