I fear what will materialize with perfect clarity as a lie on my deathbed. I wonder how I’ll reflect on the 36th year of life.

The next and the next.

I don’t mean to me morbid. It’s not morbid. Morbid is wasting the one fucking chance we have at life. That’s just my belief, of course. Maybe we get a repeat. That’d be cool, but I’m not willing to risk it.

It usually takes years for my mind to change, but once it does, it feels sudden, jarring. Like a loud knock on a door I never knew existed.

I look over to see who it is and it’s a new truth sitting there like nothing ever happened. Like she’s always been there, chillin’, waiting for me to notice her.

I guess it’s just “getting older” and that’s that. I guess the pack of experiences grows deeper and wider and weirder and we have no choice but to see the world differently and it’s not strange or even interesting.

Except, well, it is.

A couple weeks ago, on the bi-annual date taken WHETHER WE NEED IT OR NOT, Mac and I struck up a conversation with a couple who was just like us: married, with kids, on a date.

Only they were about 60.

They gave us that familiar “I remember those days” look as we told them about our 4 young kids.

The couple was lovely. I liked them.

As they got up to leave while we were finishing our avocado chocolate mousse (which I am normally opposed to on principle because keep your fucking HEALTH FOOD OUT OF MY DESSERT THANKS, but this was delicious), the man looked at me and said: “It goes so fast. Hold onto this.”

I didn’t need to tell you that. You already knew that. You knew he said that because it’s the thing every older parent has said to every younger parent since the dawn of humanity.

I waited for my internal eye roll. The irritation. The IF IT GOES SO FAST WHY ARE THEY STILL HERE feeling. I waited for the old familiar Smile-And-Nod-out-of-politeness.

But it never came.

Instead I saw a flash of sadness in his eyes and knew it as my own. The pain in his voice that might as well have been mine. I felt commiseration. I felt the same. I felt life racing by my head again and powerless and a little stripped.

Later I thought “Well shit, I guess I’ve been around long enough now to see the ‘other side.'” Their side.

Then I banished the thought immediately because I AM TOO YOUNG FOR THIS SHIT.

The pain, though, is merely a flash buried beneath a pile of gratefulness for the passing of time, that they’re all still here, that we’re still here to watch them be here.

But it’s there now. And it wasn’t before. Even when I started this blog it wasn’t there. I used to write about dropping my kids off at school and daycare and wanting to scream “FREEEEEEEDOMMMMMMMM!!!!” out the window. I only felt relief. Now I feel more.

Last June, I had my last baby. In November my first baby turns 14.

I thought when I was 22 and had my first child that 18 years might as well be 90 years because it’s so many years. Shit, it was almost the number of years I had been on earth.

What I didn’t realize is that it isn’t the kid LEAVING that filets your heart, it’s the CHANGING and transition from little kid right here playing, to kid at arm’s reach, to kid in carpool without you, to beyond and beyond and that one day you realize that the movement is away, always, as it should be, but always away, and the closeness clarity and simplicity of the early years are over so fast it might as well be 90 days. 90 minutes. 90 fucking seconds.

When you talk about this with people they’ll sometimes say “Oh, well, I enjoyed EVERY phase and never got upset about my kids growing up.”

Well, you clearly love your kids more dearly than I do. Let me run out and make you a cookie with my bare hands and adoration.

My point is not that new stages are not wonderful and exciting and dynamic and joyful. Can I tell how rad it is to sit down and have an intelligent, sarcastic banter with my tween? Or how amazing it feels to (legally, ahem) leave her with a sibling or two while I go to the freaking store? My oldest child feels like a dear friend now, sometimes. We laugh and laugh. It’s everything. It’s more than I ever could have imagined.

My point is that the wild abandon of your little one playing in the sand on a beach will not last forever and I, at least, feel a twinge of pain to know that stage has passed.

It’s the first time they refuse to hug you in the car before school.

It’s the first time you realize they’ve sat with you chatting on the blanket rather than played in the surf.

The first time they prefer their room, over you, to talk with friends.

The first time you realize they’re too big for this or that or the other thing and they’re in reality now rather than imaginary land.

The first time you realize that in less than 5 years your kid will be “full grown” (hahaha).

And in a little over 2 years she’ll be driving.

I don’t know when it happened, and it doesn’t feel like me, but every morning when I get Arlo out of his carseat to drop him off at the babysitter’s I damn near cry. Or I do cry. Not weeping. Just a tear or two.

He puts his head on my shoulder as if he knows.

I don’t know where the pain came from. I can’t even make sense of it. Because he’s my last? Because it’s too much time away? Because I’m old? Because I’m a sap now?

Maybe I’m just tired. Worn out? Depressed? Hormonal? Maybe it doesn’t feel worth it anymore. The time away.

Is this why they say that stuff about “wiser?” I sure hope not. I’m not wise. I’m just 14 years into parenthood and feeling the weight of my baby’s face on my shoulder and going to work anyway because it has to be done, and part of me wants to go, though in this second it seems I’d give anything to get back in the car and drive away with him.

Is this it? Is this what the “old people” are talking about?

My family right now feels so complete. Nobody can ever leave. It’s the six of us. It’s perfection. It’s whole and contained and just right. Soon one will leave, then the next and the next.

It will just get new.

But this day, this one won’t come again.

I feel that now, whether or not The Old Annoying People are telling me so.

I pat his back and kiss his little head, pass him into the arms of another. I wonder if she sees my tears.

I get in the car, drive away, and write to you. I’m not sure I know what else to do, today. 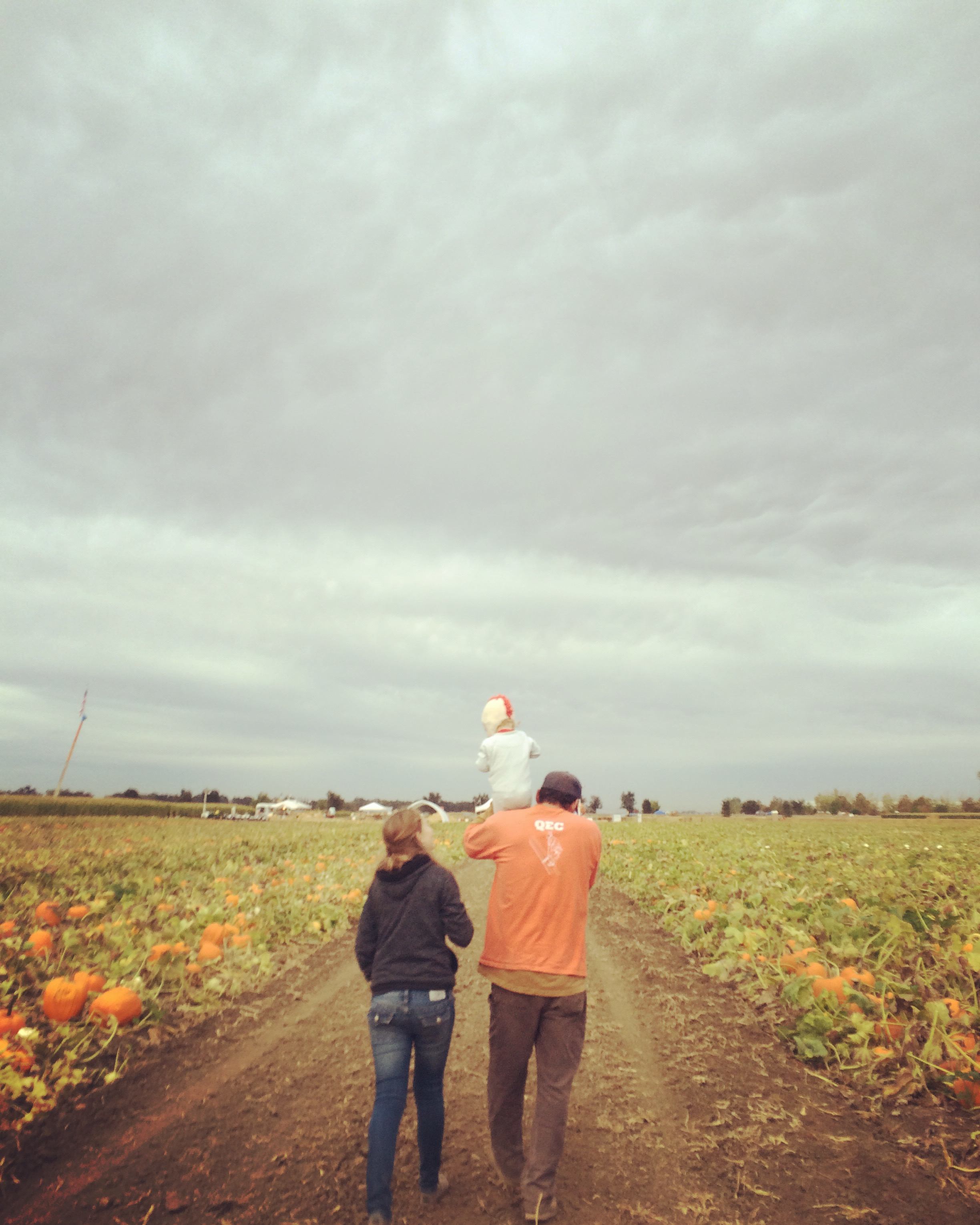 so many years here.