I don’t really remember this week, but I do remember two people very clearly…

[Bunch of banter about whatever, leading to this]:

Me: “Well I have three kids so I’m super busy and tired. Plus I’m still in grad school and I work part-time as a consultant.”

Childless wonder: “What does your husband do?”

Me: “He’s an ironworker and he works on his father’s ranch.”

Childless wonder, with fifteen layers of insinuated judgment: “And you can afford all those kids?”

[And here I begin realizing I’m talking to a smelly pirate hooker.]

Childless wonder: “Huh, yes. But sending all three of them to college will be difficult. You aren’t having any more are you?”

Me, with palpable sarcasm and disdain: “Yes, yes we are. We are having as many kids as possible. You see, the more kids we have the more we get from the government in the form of welfare and food stamps and medical care. My goal is ten.”

And then I walked away.

Next time, I will ask myself WWJD? and turn the other cheek.

But she was JUST SUCH A BITCH.

Here’s a picture of one of the kids I [apparently] can’t afford. He probably would have behaved better. No, for sure he would have. When the bar is low, success is pretty easy. 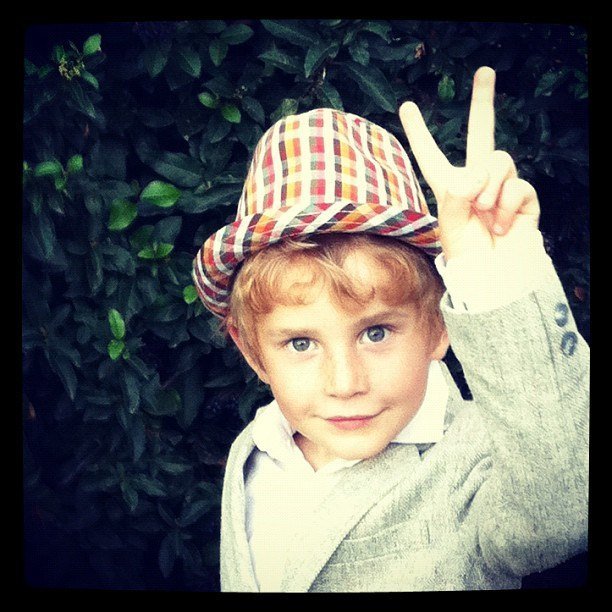 What I learned this week…crocheting, pause buttons, guilt-free mothering.
This week…at least we have a plan.
This week...profanity, Fubu, bunnies. Whatever.
Share1
Tweet
Pin
Email
1 Shares
14 Comments | Posted in weeks of mayhem | April 15, 2012