Verbal Abuse: The Cornerstone of a Healthy Relationship

In keeping with the general trajectory of my life, wherein I do everything in precisely the wrong way, my husband and I have, since the beginning, made practically every mistake available to humans.

And, just like any Meg Ryan movie, we got married in front of a courthouse on a cold December day, wearing all black, and our baby in a sling.

After reproducing and marrying, we decided to get to know each other, and realized to our great dismay that we only vaguely enjoyed one another’s company. We broke up like 9 times a week, often wishing homicide didn’t carry quite such a heavy sentence.

We drank too much whiskey in too many dive bars while attempting the dubious task of living a “grown up” life with no money, maturity or discernible future.

The recipe for success, as you can see.

And yet somehow, we’re still here.

Despite some really solid efforts to eradicate our relationship (burn it down, in fact, TO THE GROUND), we are still, 12 years later, a unit.

And I’ll be damned if we aren’t the happiest unit you ever did see.

By some miracle (of what must be a really twisted love god), we have a damn good marriage. I mean it. We’re like happy. We flirt, laugh, hang out, send gushy texts, don’t have affairs.

And since it’s generally people who are just starting out in a serious relationship or recently married, I feel a little awkward explaining that ‘what we did’ was everything wrong and ‘what we’re currently doing’ is apparently, everything wrong.

You see they always say the most important feature of a lasting marriage is “good communication.” They say it’s the cornerstone of a healthy relationship. As if patience and understanding, “I” statements instead of “you” statements, no sweeping generalizations, no attacks or criticisms or name-calling form the HOLY GRAIL of marital bliss.

All of this came to mind the other day when I was tutoring a student in the writing center who’s taking a communications class, and I read the following in her textbook:

“Marriage counselors have long emphasized the importance of communication for healthy, enduring relationships. A primary distinction between relationships that endure and those that collapse is the presence of effective communication. Couples who learn how to discuss their thoughts and feelings, adapt to each other, and manage conflict constructively tend to sustain intimacy over time.”

And then it gave the results of a poll in America, in which they found “a lack of effective communication to be the primary cause for divorce.”

If this is true, what the hell are Mac and I still doing together? And why are we so happy?

Me, in a horrid, critical tone: “Why do you [insert behavior that’s only annoying me because I’m overtired]? I mean how does that make sense to you? I don’t fucking get it. You make me insane. I can’t take this shit anymore.”

Me: “No, this isn’t because I’m tired. This is because you’ve got something wrong with you and I’m sick of it.”

Me: “I would if we didn’t have these kids. Where the hell am I going to go now?”

Him, looking like he’s about the break my face: “I don’t know. Go anywhere. I can’t fucking stand being around you.”

Me: “I can’t stand you either! You have NO IDEA HOW MUCH IT SUCKS TO BE MARRIED TO YOU.”

And then he walks away and I chase him down because I don’t want to miss the opportunity to converse in this constructive manner.

Me: “I can’t believe I have to deal with this shit for rest of my life.”

And with death glares, clinched fists and dark thoughts, we stomp off in different directions and slam a door or whatever. We go about our business, really fucking pissed, thinking we should probably divorce. About 8 to 12 minutes later one of us (usually whoever instigated the whole thing (WHAT? Why are you all looking at ME?) comes back around and says something totally unrelated, such as “How was Rocket’s parent-teacher conference?” or “Did you pay the Expedition payment?”

The other person answers. A couple minutes after that, the bigger asshole (no seriously, stop looking at me. You don’t know. You don’t LIVE HERE.) occasionally mumbles some sorry excuse for an apology, like  “Um, sorry for being a dick.”

And that’s it. That’s how it goes. We just drop it, until it happens again, AND IT ALWAYS HAPPENS AGAIN. Because seriously, after 12 years with somebody, the crap that still annoys you ain’t ever going away. You can talk about it “constructively” until you’re actually out of air, and every word on the topic has been uttered, and every approach has been tried, but seriously, if it hasn’t changed yet, it ain’t never changing. (Yes, I believe that sentence called for a double negative.)

For example, I will always be better at multi-tasking, at looking at a situation and seeing what needs to be done, at taking care of the twenty-seven thousand things that must be addressed in our day-to-day lives.

Mac will always be better at not being an overbearing asshole.

To each his own I suppose.

So basically they’ve lied to us again. They lied about adulthood (it really isn’t that fun). They lied about motherhood (one word: Babycenter). And now, they’ve lied about marriage, telling us that unless we sit down in a perfectly calm manner, thoughtfully “adapting” to one another, listening with the attention of a thousand Zen monks, our marriage will fail.

As far as I can see it, marriage is messy. It’s ugly. It’s disheveled and weird and clunky. It’s a whole lot a of tenacity thrown in with bit of romance.

You know what it is? IT’S FUCKING WORK.

I am absolutely convinced that the only reason Mac and I are still together is because we stuck with one another with an insane, [irrational] bulldog vengeance. We gritted our teeth and dug them in and JUST WOULD NOT LET GO. We weren’t happy. We were so far from happy we made Misery look like a love story.

And we were dragged through the mud. We were towed across the coals. There were times so dark I thought I wouldn’t survive.

And there are still times I’d like to bust his gorgeous face across my knee.

But there’s never a time I regret standing in front of that courthouse 12 years ago, marrying a man I felt in the depth of my soul was the one for me, devoting myself to him without knowing how to do so, trusting something, something that told me it would be alright. And I’ve never regretted holding on, even when the only thing keeping me there was the fact that we had already started this life together, and our kids were just so beautiful, our family just so dear.

And as it turns out, we were just babies, trying to find our places in the world.

And when we finally did, it turns out they were right beside each other. I know that’s not everybody’s story. But it’s mine, so I’m telling it.

So screw those damn chick flicks. Screw the 50-year honeymoon bullshit. As far as I can tell, marriage is lived in the trenches, on the ground, in the mud. It’s built on the ruins of mistakes and struggle. But when it finds its footing, when it’s withstood all that crap, when it stands like the mightiest brick house you’ve ever seen, my god it’s lovely.

But they don’t tell us that shit in movies. It’s either 50-years of wild sex and unbridled joy — or it’s divorce.

I don’t buy it. I don’t buy any of it. I think there’s more to the story. At least there has been in mine.

So to my friends who’ve asked “How do you do it?”, I’ll tell ya all that I know (though let’s be honest, it isn’t much):

Marry somebody you love, then hang on like hell, with everything you’ve got, until one day you let go and to your surprise, you find you’re carrying him, and he’s carrying you – with big, easy open arms, and the most fucked-up perfect marriage you’ve ever seen.

And relax, you can do it all wrong…

until it’s all right. 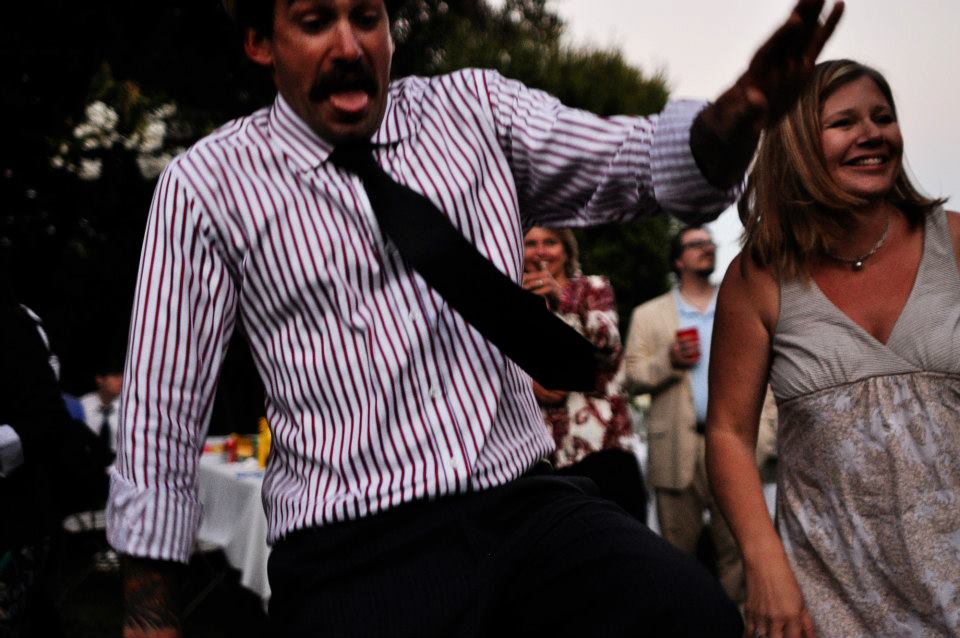 We’re going to be featured on Hoarders!
"Can two people be in love forever?"
Invisible labor and the "small space" that's ours.
Share173
Tweet
Pin2
Email
175 Shares
32 Comments | Posted in cohabitating with a man. | November 29, 2012