A friend once told me life gives you what you need. I believe him.

I could have waited and lied to you, faked it, written something interesting or more amusing like I had my act together and haven’t been struggling, but I have been struggling, and that’s why it’s been a week of no writing.

No inspiration. What’s a girl to do?

There’s a temptation to pretend, you know, force myself to do something inauthentic. But I can’t seem to do that to you. Or me.

And the truth is there are times in my life when I’m done. Just done. I don’t know why or how it happens, but it seems like I turn some corner and boom.

Not quick and sharp or stabbing pain, but more like a low hum in the back of my mind. A burning deep down.

A quiet simmer of vague discontentment, drifting, rudderless. A sneaking suspicion my life is not being lived, though it may appear so on the outside, and I’m alone. There’s a lot of fear though it can’t be nailed down.

I just feel so LOST.

I’m paralyzed by it all. The house, the mess, the stuff. The kids, the work, the years.

I lose interest in all the things. My temper grows short. Nothing feels enlightening or, to tell you the truth, even vaguely interesting. I feel like I’m faking it. All the time. With my smiles.

Joy passes in moments like a car racing by. I hear it, but by the time I look for it it’s gone. The sound resonates in my ears as my eyes turn back to nothing.

When the pain first descends, I start looking outside for the problem. Outside of me.

It must be that I gained that weight back. I’m fat. That’s what’s wrong.

It’s our money problems. I can’t stand being broke anymore.

I need a job. Obviously!

I need to write. My problem is I haven’t written that book.

It’s my town! I hate this shithole town!

It’s my house. This house is so trashed; nobody could live in this maelstrom of crap.

I used to blame my marriage, but that got too exhausting.

I used to blame everything, anything.

But eventually, I stopped looking, because I’ve already gone down those roads. I know they’ve got nothing for me. I used to read a bunch of existential literature. Sartre gets it. Nietzsche knows. What I need is a little Kierkegaard.

I used to drink, take drugs, get all dressed up and go out partying. Get some attention from some boys. That’ll cheer me up.

But I don’t do any of that anymore.

I know there’s only one way to escape from this, and that’s to move right into it.

Makes no sense, but it’s true.

My greatest fear, I guess, is that existence is meaningless, and that my life will be spent in a shithole town doing absolutely nothing of interest, and the words in my soul will be left unspoken, and my kids will grow as I grow and die, the end. Life will pass me by as I’m running on some plastic wheel made in China manufactured for Walmart, working for something that I can’t even see, for people I don’t even know, and when I’m 80 I’ll wonder what the fuck I was doing all that time.

Why didn’t I live when I could, I’ll ask. Who was I meant to be?

A wasted life. I’ve seen it so many times.

Eventually, with a mix of fury and terror I move headlong into my pain. Because at some point, there’s nowhere else to go. And I want to get to the truth.

If my depression were a room I’d walk into the center of it, where all its energy converges into a glowing face of my own agony, and I’d look it square in the eyes and wait.

And I see she’s got nothing. Just the same old shit she’s been feeding me since I was a young girl, lying awake at night contemplating infinity, the crushing weight of it all on a tiny girl’s heart, wishing I could believe the stories I heard in church.

If I look hard enough into that fear, if I’m brave enough to really look, I see she’s full of shit.

I see everything I need is already here.

I see fear exists in the past and the future but never right now, in the center, in this spot, where my feet are, safely.

Where I live, NOW.

And I feel a little compassion for her, that burning ball of desperation, that sad little whiner deep inside, terrified beyond recall, poor little thing is just sure she’s going down.

I tell her “Honey, you’ve already gone down. And you’re still here.”

What are you afraid of?

And I’m grateful, because that pain comes along sometimes to jolt me alive, reminding me that this is really all I’ve got. And I see the ways I’ve been wasting my hours.

On my phone, screwing around when people are talking to me. Absent.

In anger. Surfing the internet. Escaping.

Fearing. Fighting what is. Asleep.

Until I get so desperate I pack two of my three kids up (one was at a slumber party), and grab my husband and take a whole day off, of everything, and go to the beach, to surrender to my lack of ideas, hear waves and smell salt air and feel it too, the rocks and white cold water and the burn of the sun on my hungry skin – to feel connected to something again, old friend, the ocean.

And when I’m there I see this… 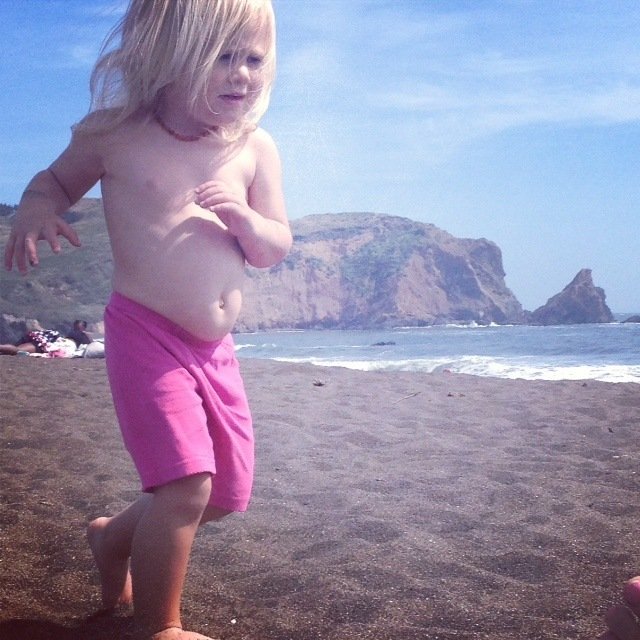 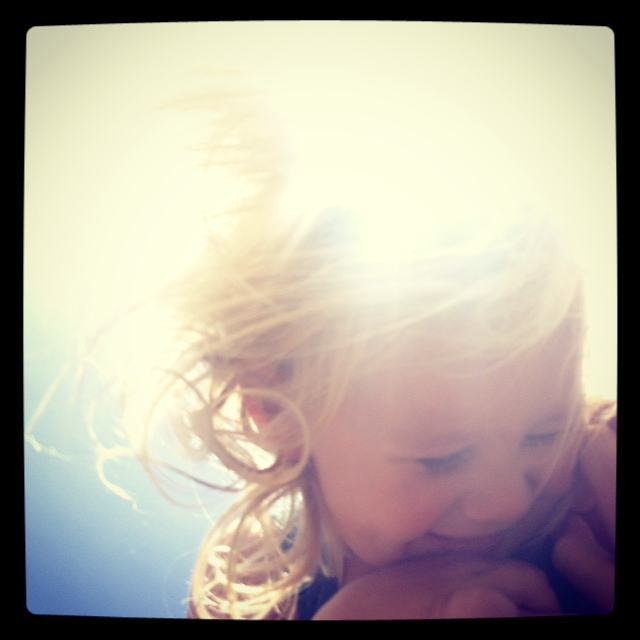 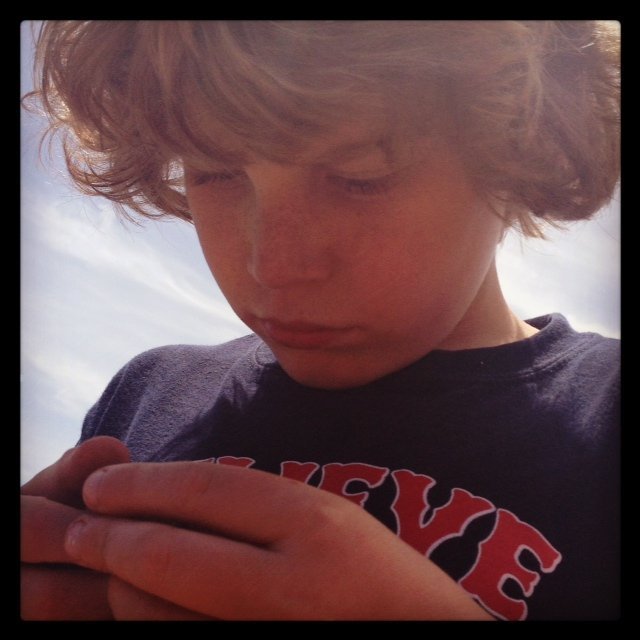 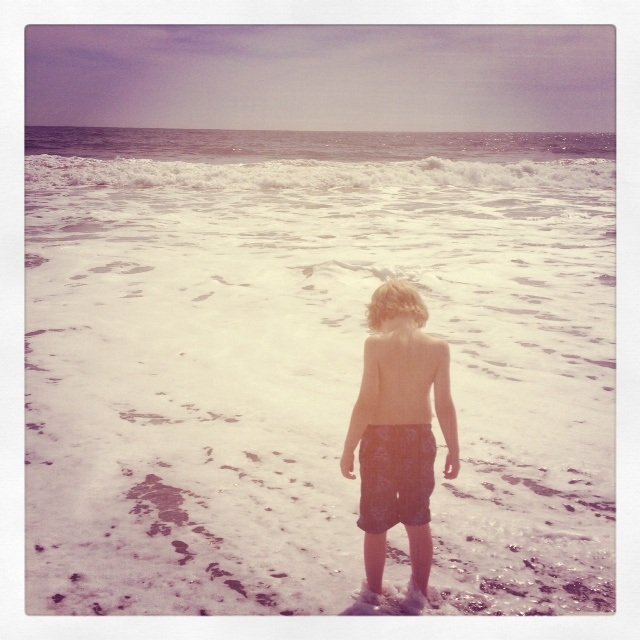 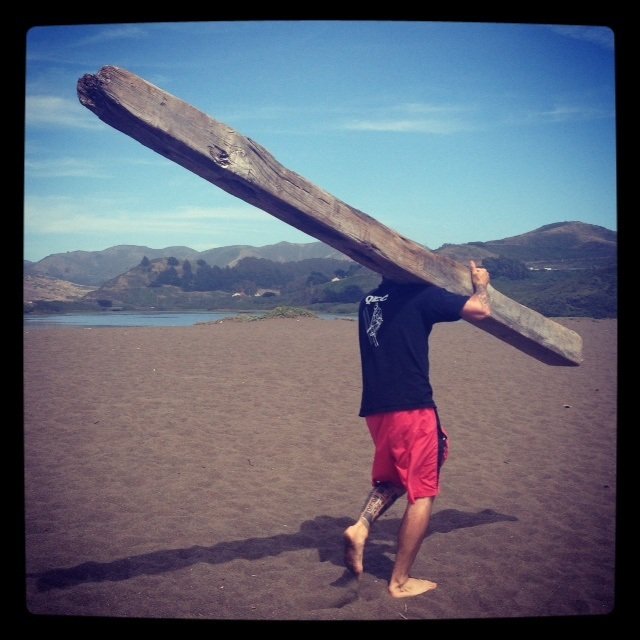 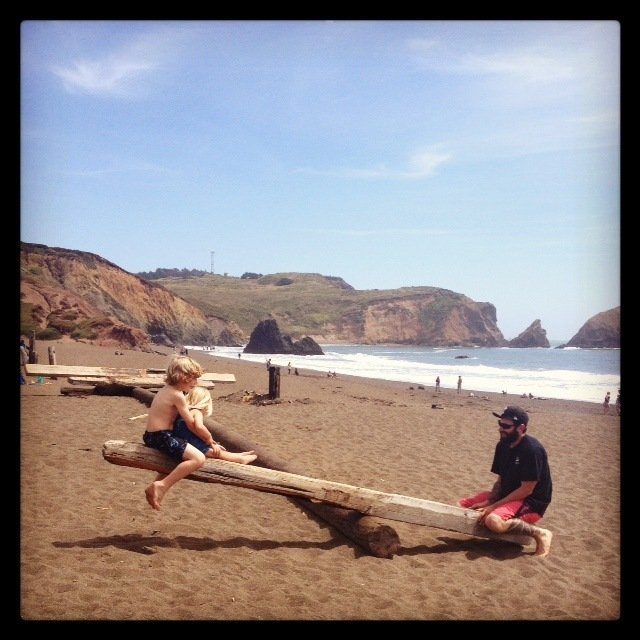 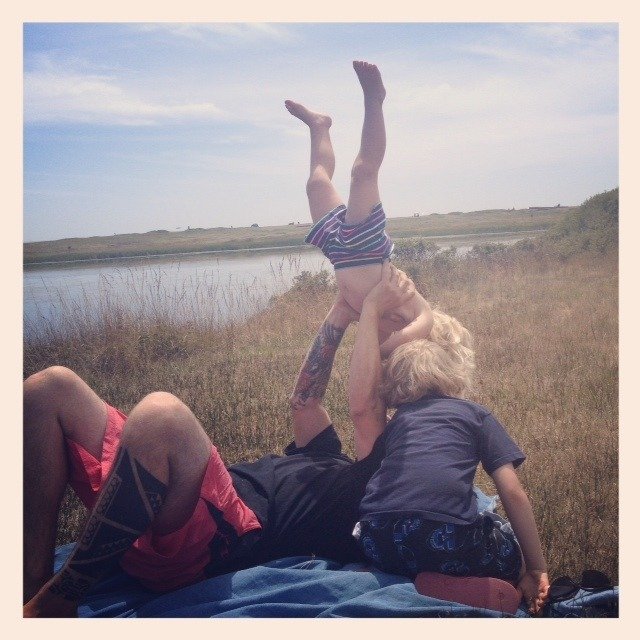 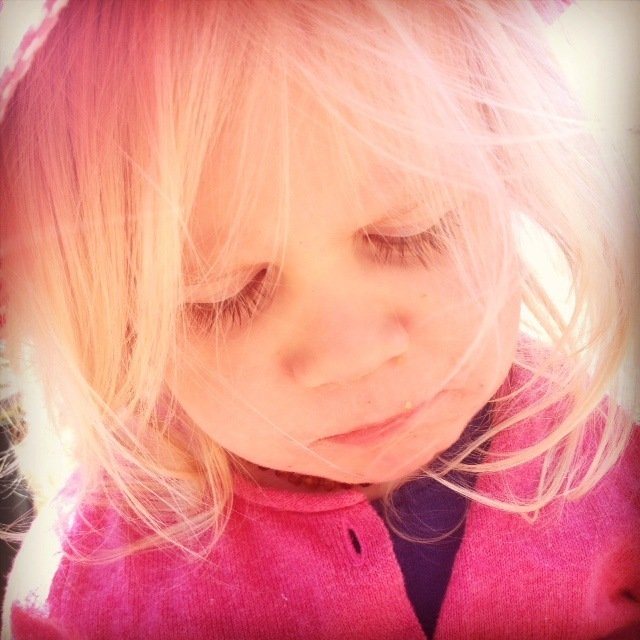 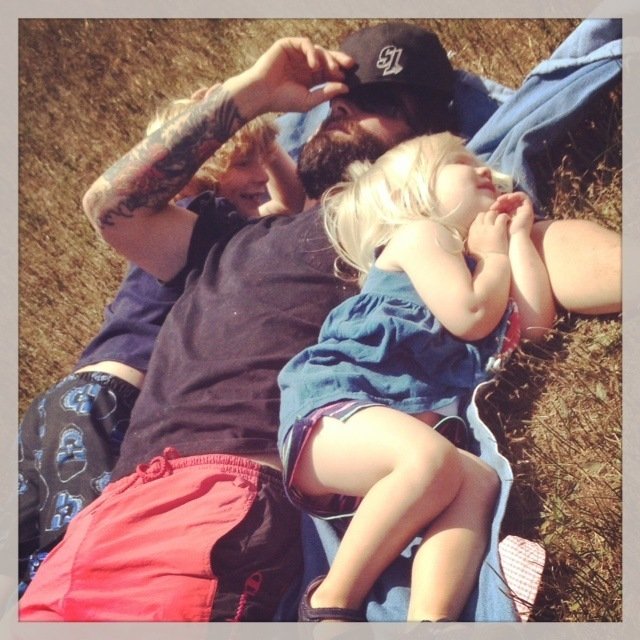 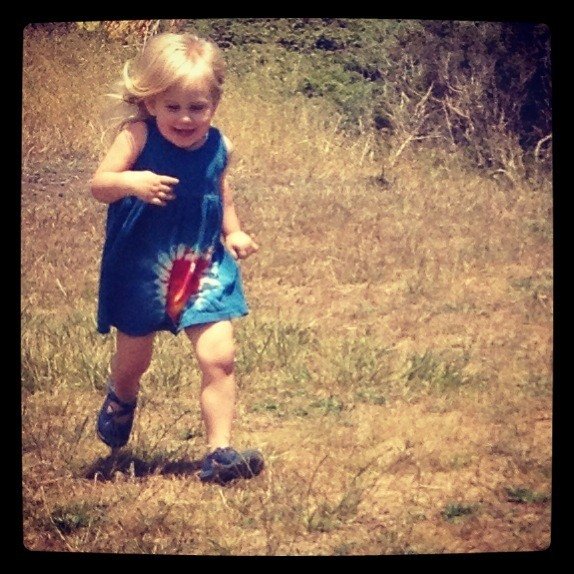 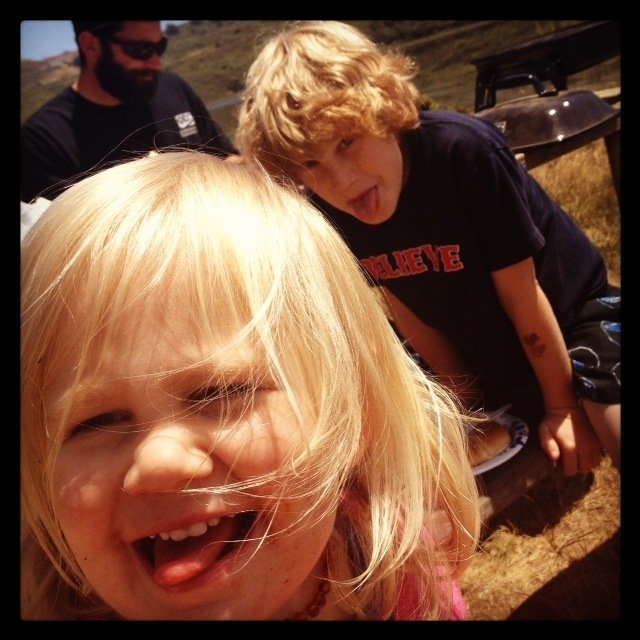 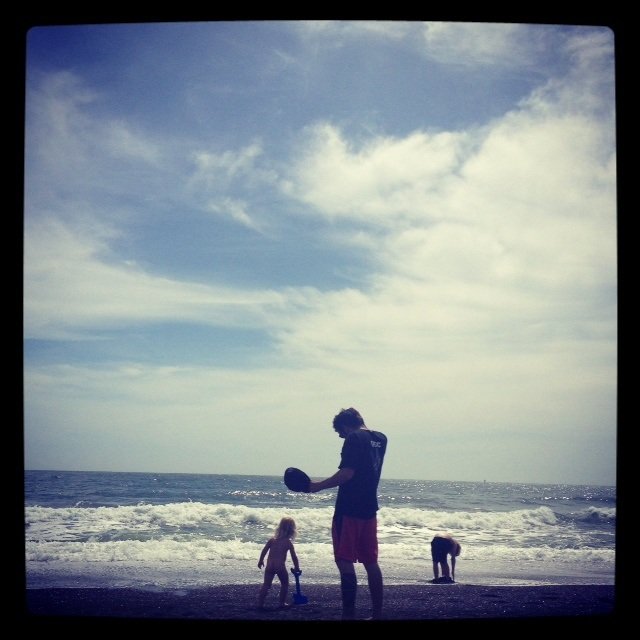 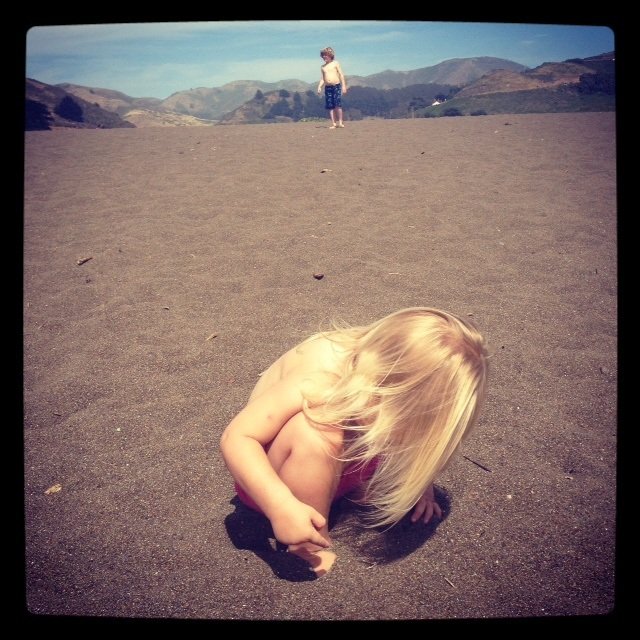 It’s still humming, the fear, prattling on in the back of my mind, but I don’t care, she’s just running the same old story.

And frankly, I’m no longer interested. You’d think she’d come up with some new shit after all these years. But she doesn’t.

I smile at her antics and drive home, realize I’ve got too much life to live now, you know. The kids want to listen to “Say Yes” by Langhorne Slim. We do.

There’s no time for anything else.

So I just hang out with her for awhile longer, let her do her thing, ride it out as best I can, until one morning I hear the ocean waves in my boy’s breath as he sleeps next to me, alive in perfect rhythm with the universe I’m terrified of.

And I realize I’m doing the same. And always have been.

Later I sit down and write to you all, telling the truth one more day.

I feel the urge to write something interesting.
16 weeks, totally insane and no end in sight!
Georgia's home birth story
Share574
Tweet
Pin1
Email
575 Shares
62 Comments | Posted in I HAVE NO IDEA WHAT I'M DOING HERE., or something, over-sharing is my talent, Sometimes, I'm all deep and shit..... | June 3, 2013