I’m supposed to be at an ashram.

I’m supposed to be at an ashram in the Sierra Nevada foothills, meditating and doing yoga with a bunch of blissed-out white people, but I’m not. But we’ll get to that in a moment.

The place was fucking beautiful. Green grass, ponds, flowers, stone walkways. Giant weeping willows, hammocks, sprawling oaks. The cabins were just rustic enough to seem earthy as opposed to “run-down.” I pulled up and felt a sense of relief just to be out of my house. Here we go. Nature, meditation, yoga. I SHALL BE FIXED.

Fixed from a dark mental place. I was not doing very well. A couple weeks before I stood at the GET SPIRITUAL NOW gate (It doesn’t actually say that. I just made that up.), I realized I was moving from “dealing with tough circumstances” to “not dealing with anything” due to an internal sense of hopelessness and the related apathy. I saw myself crushed under the weight of my own self-pity, of my childlike tantrums that my life didn’t look as it should, that I wasn’t getting “what I deserved,” that it wasn’t “fair.” I had become identified with asshole circumstances of my life and I couldn’t wrestle myself free. I knew I had ceased functioning but couldn’t figure out how to get past the paralysis of my feelings.

So, like any white middle-class northern California woman in despair, I bought a Groupon for a “Beginner’s Yoga and Meditation Retreat” at an ashram in Grass Valley. They kept referring to us as “The Groupon People,” which hopefully sets the stage for what I’m about to tell you.

Allow me to say it bluntly: If I see one more blissed-out Caucasian bouncing around barefoot in white flowing pants and a small smile of “Damn it feels good to be more enlightened than you” plastered on their vegan-fed faces, I may die.

One woman had actual flowers IN HER MOTHERFUCKING HAIR, and literally pranced. As in, gently hopped instead of walked. She was the skinny prancing flower lady.

I thought “maybe she’ll get strangled in her Tibetan prayer flags.”

This is why I’ll never be a swami.

A bunch of the volunteers were running around barefoot. My friend and I found this baffling because we were supposed to take our shoes off inside the buildings, presumably out of respect and cleanliness, so if they’re barefoot outside and walk inside, aren’t they still bringing the dirt into the room?

But one looks much more spiritually connected while barefoot, and that’s what’s important here, folks.

All the signs said “Blessed self” at the beginning. So it would say “Blessed self, please don’t put your tampons in the toilet.” Or something like that. I found that hilarious. “Blessed self.”

But if they actually believed we were all “blessed selves,” if their respect for us ran so deeply, as fellow manifestations of the Divine Creator, what’s with the air of smug superiority?

Check it out, blissed ones: I don’t care how many chants or “asanas” you do each day, you’re still an asshole and therefore missing the whole damn point.

Statues of Hindu gods and goddesses lined the back of every room, but since none of us knew what any of it meant, it felt like a stomach-turning display of cultural appropriation. The statues had “meaning” and “depth” only because they were from “over there,” from far away. It was the eastern mystery and “otherness” that made them compelling and “deep.” To illustrate this point, I can only imagine people’s responses if there was a bunch of Judeo-Christian images and statues surrounding us. All the yuppies be like “What? Jesus? Fuck that shit. I grew up on that. Give me some nice deep sublime Hindu stuff!”

Meanwhile, there’s a dude with a pile of flutes telling me to chant something in Sanskrit to “wake up.” Weird thing is we didn’t ask him for help, or even indicate we were in the market for energy advice. His pretentiousness dripped from him like agave syrup in June.

I tried to kill him with my eyeballs.

He spoke to us like we were absolute morons, pathetic little creatures come to lap at the bowl of his insight. And I suppose it was kind of true, actually.

The main teacher dude, another white guy with serene expressions, Swami something (they all changed their names to something more spiritually appropriate, like “Padma” and “Kala.” I felt like saying “You know your name is Kelly or Nathan. KNOCK IT OFF.”), anyway he lost me on day one when he refused to answer the question of a socially awkward teenager dragged there by his mother.

Deep Swami Guy said he wore orange as a symbol of him “burning up the karma.” The kid asked “What does that mean?”

But Swami Dude didn’t answer his question. He laughed and said “Well that’s a big question. There are whole classes just on that concept.” And with an air of “sucks to be you, small human” he moved on.

And sorry dude, you don’t get to dismiss Super Annoying Teenage Gamer Kid in the front row because his questions aren’t feeding your ego appropriately. Of course he’s super awkward and annoying, but you’re supposed to be seeing his buddha nature, aren’t ya?

And the lectures on “prana” and how we should eat and “transform compassion” in all this esoteric bullshit nonsense. So much theory. So much in-the-clouds bullshit. Big concepts and big words and “deep philosophical truths” and “profound spiritual insights” are used for one purpose: To mask the fact that we have no idea what the fuck is actually happening.

In other words, Swami dude, you’re just as captured in the ego structure as I am. You’re convincing yourself you’re “deep” and “spiritual” because you’ve learned a bunch of scriptures and chant and live in an ashram and shit, but real teachers aren’t pretentious, and they don’t spout deep thoughts all the time. They’re on the ground, right here with me and you and all the other Groupon humans, and when they talk you know they’re speaking truth because it is you in the deepest part of you, not just some fancy idea that sounds good but has no practical application.

We feel more human in the presence of these teachers. Not less.

Oh, but how these earnest, lovely imposters helped me.

God damn it they gave me everything I needed.

In the late afternoon of day 2, after sitting through 2 more hours of esoteric posturing, I packed up my shit and left. I drove to a hotel in Sacramento, ordered some Thai food and went to bed at 8:22pm, alone. I slept TWELVE SOLID HOURS. Twelve, people.

I walked out of that place because I realized two things: 1.) I need some privacy and sleep; and 2.) Nothing will “fix” me.

There is no escape from reality. There is no silver bullet and there is no “fix.” No ashram, no teacher, no guru, no wilderness and no words. No change in my life circumstances.

My problem is not my life. My problem is that I’m battling my life, refusing to accept it as it is. Some things have happened recently that have deeply hurt and tweaked my family. I cannot change the past. My husband is working out of town and I’m struggling with the weight of these kids, work, and my powerlessness to change any of it right now.

But I refused to accept these things.

Instead, I was kicking and screaming and thrashing against it. Fighting it. But I can’t win this fight. Life is. Reality is. I can work with it or die from insanity trying to beat it. I was on the path to the latter.

It isn’t about loving it. It isn’t about even liking it. Accepting reality is about freedom, a little serenity, and effectiveness.

You see, simple? I have to accept the truth of my life as it is RIGHT NOW before I’ll understand how to effectively move in new directions. I was stuck and dying and wasting time knee-deep in futility. It looked like resentment, anger, self-pity and fear.

So thank you, out-of-touch swami and swami wannabees with your flowing linen pants and serene smiles, for being just like me: Broken, kinda pathetic, judging too harshly, working like hell to get someplace new, oblivious to the fact that we’re already there, and everything we need is right here already.

(But please, stop being a dick. Nobody likes enlightened dicks.)

I’m headed back to the ashram of my insane family.

I’ll miss him like crazy, and in a week be back to mind-numbing exhaustion, but I think I’ll start meditating again, and it appears I can sorta do yoga, and that’s some healthy shit. Healthy shit is good.

And goddamn that weeping willow taught me a few thousand things. And the king-sized bed with the clean white sheets, thank you. You just told me everything I needed to know.

Nice to be back where I can listen again. Nice to have a few minutes to write to you. Nice to be alive. 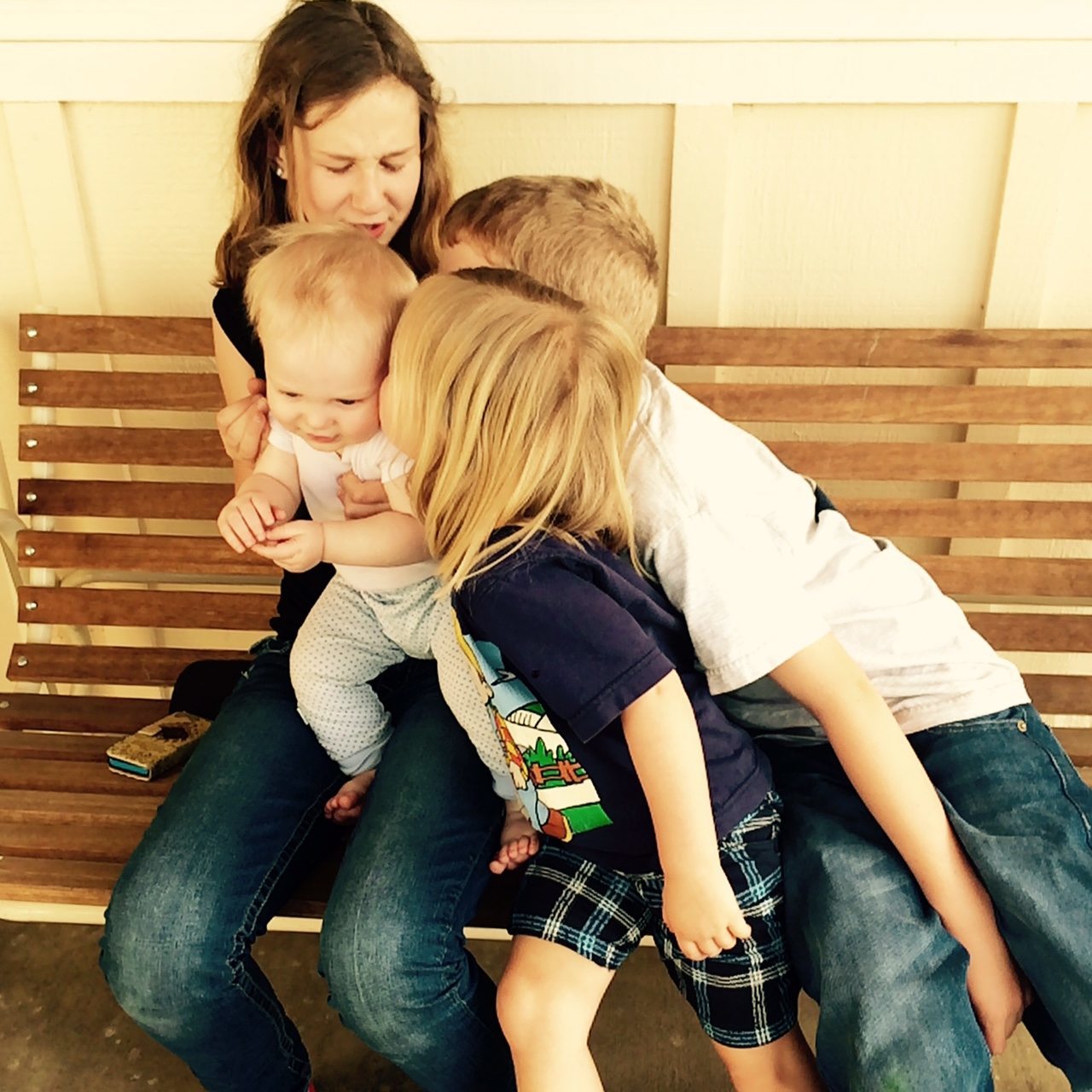 Swami one, two, three and four.

2017 is over and I'm still confused
My daughter turned 17. I turned into my mother.
Not particularly insightful post on the topic of bullying
Share1.9K
Tweet
Pin5
Email
1.9K Shares
64 Comments | Posted in I HAVE NO IDEA WHAT I'M DOING HERE. | March 15, 2015

We’re on a little vakantie in southern Netherlan