My expert advice on when to take baby to the doctor

Sometimes I hear parents get confused about when they’re supposed to take their baby to the doctor. You know, how to tell the difference between an infection and a virus, or the severity of either. And I think this is weird. I mean it’s so simple.

But that’s probably because I have 4 kids. My experience is vast, my knowledge virtually endless. My oldest kid is 13 years old, so just imagine how many flus, colds, ear infections, tooth problems, respiratory infections and other ailments I have skillfully faced.

Since this has been a particularly sickly year for everybody, I thought I would share how to know when you’re supposed to take a baby to a doctor.

You can thank me later.

First, if the baby is a newborn, you take them at the first sign of anything at all whatsoever: Sniffles, cough, low fever, because it’s probably Ebola, polio, or whooping cough. If it’s your 2nd 3rd or 4th newborn, you do not take them immediately but rather wait 12 hours and then take them in. Because you’re more laid back now. 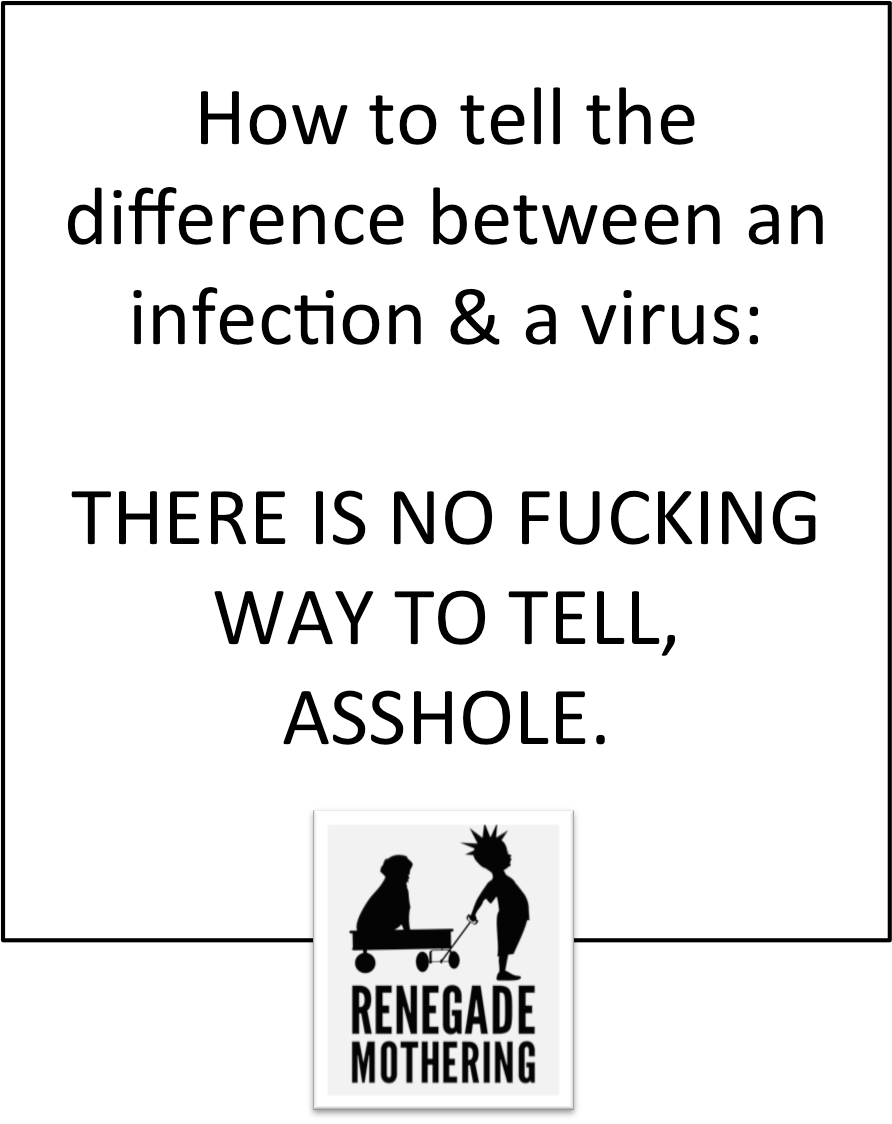 Do not argue with me. Just do it. There is no other way.

Once they’re past the newborn stage, it gets a little trickier. Luckily I’m here to help:

So it’s either teething or walking pneumonia.

There’s probably no way to know which is which, except for the cough. Do they cough when they lie down? Then it’s probably pneumonia, except that also happens when they have shit in their chests.

Get a stethoscope and listen to their chests. Do you hear scratching sounds? Yeah I’ve never actually heard anything either. Let’s move on to snot. Snot assessment is super reliable.

Is it snot green? Then it’s an infection. Actually that’s just an old wives’ tale.How long have they had snot? Six months? Oh right. They’re babies. That’s probably nothing. Don’t worry too much about snot. 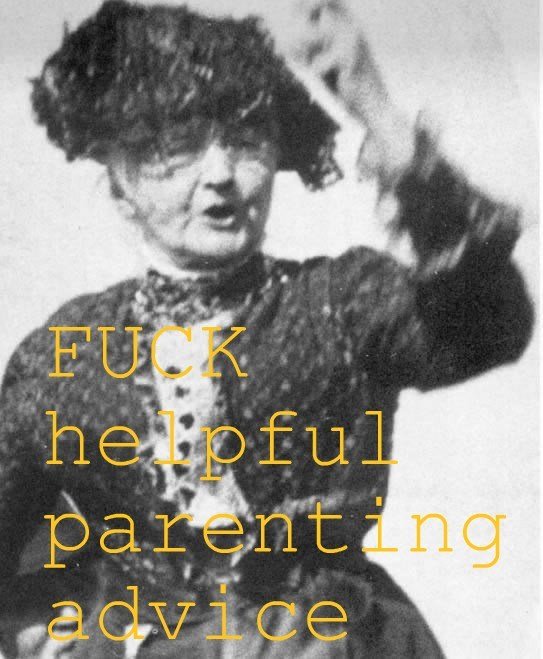 But cough? You should worry about cough. Persistent cough is BAD. Except sometimes the cough from the cold 3 weeks ago is still happening, which is pretty fucking persistent, but in that case not a big deal.

Are we clear so far? Good. Let’s move on to raspy sounds.

If they have raspy sounds when they breathe you definitely need to take them in because that’s a respiratory infection, except also snot in the throat sounds pretty much exactly the same, so maybe it’s that.

It’s either something in the chest that needs antibiotics or it’s a virus.

You don’t get to know this though, ever.

Figure it out though because you don’t want to be one of those douche moms who takes their kid in for nothing plus you’ll be bringing them to a goddamn cesspool of kid germs UNNECESSARILY and sometimes even little infections will heal on their own through the power of breast-milk and good vibes so DO NOT OVERUSE ANTIBIOTICS ASSHOLE.

Are you taking notes? You probably should be. This wisdom was years in the making, pal.

Lethargy, however, that’s clear. If they’re lethargic, DO NOT DELAY. Except fever can kind of make them lethargic. You know, like your baby who never stops crawling starts lying his head on your chest and you’re like “THIS IS DEFINITELY LETHARGIC” so you go straight into the emergency room because the fever’s been there for 5 days TOO LONG FOR SURE but then you’ll get there and the nurse will give him Ibuprofen and 12 minutes later he’ll be flirting with the homeless man to his left and the strange thought will pass through your mind: “OMG would you please act sick like you have been FOR THE PAST FUCKING 3 DAYS?”

Then you’ll realize that’s a terrible and slightly insane thing to think and you’ll be grateful again, always, of course, that your baby isn’t really, actually sick.

But since you’re there you’ll see the doctor anyway and she will look at you like “No really, stop being such a fucking moron.” And you’re like “no really he’s sick” but your words are unconvincing since the “sick” baby in question is now grinning and waving frantically while playing peek-a-boo with a tongue depressor.

So basically, what I’ve learned after 13 years of parenting, endless colds and flus and viruses and strep and ear infections is this: I will always take my kids in too soon and 98% of those times my baby will suddenly, miraculously, for no apparent reason, become healed as we cross the threshold of the doctor’s office, successfully making me look like an ass ONE MORE FUCKING TIME and I will say to myself “Next time I’m not doing that.”

And the next time, I will move through the various aforementioned stages of virus vs. infection assessment and hold out and hold strong until exactly one day before they were going to get better. And then I will take them in because I AM ABSOLUTELY SURE THEY NEED ANTIBIOTICS OR SOMETHING but they don’t.

And I’ll feel dumb and like I’m wasting the doctor’s time. But I’ll walk out thinking “Well at least we know.” And I’ll swear I won’t do it again because I learned this time but I will, always.

I tell myself it’s better to look like an ass than be wrong.

I should know, I’ve been practicing both for approximately 13 years and 5 months. 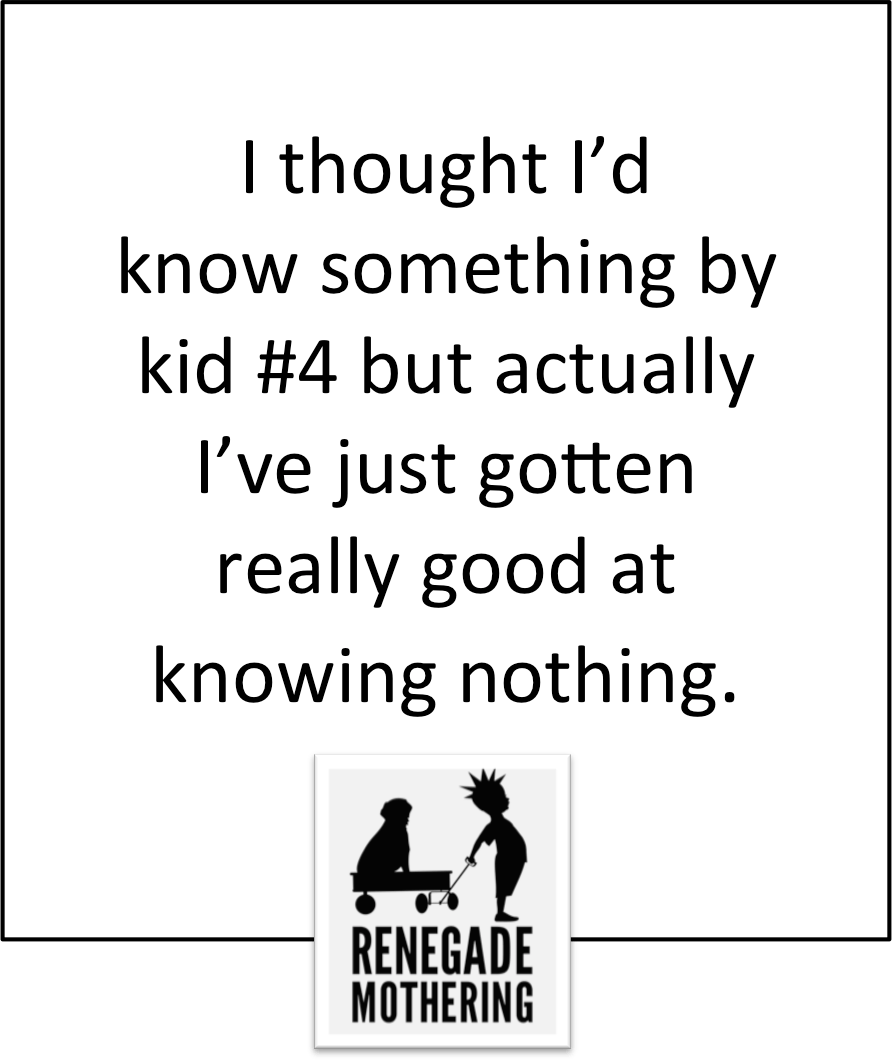 Only 3 spots left in my May writing workshop.

Join us. Now. JUST FUCKING DO IT ALREADY.

The Stages of Parental Degradation in the Grocery Store
Do they ever stop talking? EVER?
So the kids are back in school
Share18.64K
Tweet
Pin29
18.67K Shares
48 Comments | Posted in I HAVE NO IDEA WHAT I'M DOING HERE. | April 7, 2015

Natasha - Houseful of Nicholes@NatashaNicholes·
31 May

It's a shame that we're both having to protect the media AND fight the proper stories being shared by them. You all know that the looting/rioting/violence is not at the hands of the protestors, but those are the stories you're choosing to focus on.