Do you ever wonder what your kids will remember?

I am often the mom who forgets whatever it is I was supposed to do. The activity. The paperwork. The change in regular scheduling. The thing the kid was supposed to bring to school: a stuffed animal, for example.

This is not because I’m a “hot mess mom.” I don’t even know exactly what that means, but I am not a mess. I just suck at this.

I’m not flighty or air-headed, bouncing around all WHAT IS HAPPENING WHERE AM I OMGGGGGGG. My feet are on the ground, but I struggle, that’s for sure, and I forget a lot of things.

And sometimes my tiny mistakes seem to quadruple in frequency and I find myself buried beneath a sense of my own failure, though I know I’m not really failing my children, my community, or myself.

I’m not a mess. But I’ll never be the mom who is uniformly on top of her game. I put things in my calendar then forget to check my calendar. I RSVP then forget the next day. Of course, I’m also working hard on my writing career. But even when I was a stay-at-home-mom, I gotta level with ya, sometimes all this kid shit STILL wasn’t first on my list of Critically Important Things, and I don’t feel guilty about that. Does that make me evil? A bad mother? No, it does not.

It makes me imperfect, and me.

Lately I’ve been struggling again with serious insomnia. It’s been five years now, but last week it went batshit and decided it would obliterate all sleep except for about 3 hours each night. I was crumbling. I woke with pain across my eyes and cheekbones in a zombie-like fog that wore off around 3pm, only to be replaced by a frantic exhaustion that I knew would never be soothed.

And my god is it heavy.

And so, I was messing up a lot. Forgetting a lot. Showing up late. Barely making it to this or that. And yet, at the same time, I’m writing my book and a screenplay and this blog and running writing workshops.

I am fucking tired though. And I sorta suck at this.

I volunteer in Georgia’s kindergarten on June 5 because it’s the last chance I’ll get this year. I volunteer for a last time even though I only did it two other times this year, and planned on doing it so many more times. I feel sad I didn’t do it more. Every week, there was more work, more sick kids, more sick me, and I didn’t do it like I planned I would.

I scramble to sign up for one last day and wonder where our year went. I get there and watch her on the floor, legs crossed, on her circle, looking up at her teacher. I try to burn the image into my mind. She turns around and waves, “Hi, mama!” she says under her breath, her little kindergarten fist and blonde head. Sitting there I remember our little co-op preschool, the way she always wanted to play “Sneaky Snacky Squirrel.” I remember how annoying those kids were.

I glance at my phone and wonder if I’ll have time to finish that writing project.

I’m grateful I get to go to her classroom at all, volunteer at all. When I worked in an office, I don’t think I even knew parents were allowed to volunteer in classrooms.

Her face sinks, “Yes.” They are going to create a habitat for them, out of boxes. That even sounds fun to me. She told me about it the day before. How could I forget? God damnit. I WAS JUST HERE TALKING ABOUT IT WITH THE TEACHER WHAT IS WRONG WITH ME.

“Maybe we have one in the car,” I say, figuring what are the chances we don’t have a fucking stuffed animal in this giant SUV full of every other item known by humankind.

But of course, we happened to do our bi-annual cleaning just a few days before. I’m kidding. We totally clean tri-annually.

There’s nothing. I can’t believe it. I look down at her and imagine saying, “Sorry, my love, but you’ll just have to not have one.” I imagine her sitting there without one. I tell myself it’s not a big deal. I KNOW it’s not that big of a deal, but in that moment in front of that school and child, I couldn’t take one more tiny failure. I felt my voice cracking. The exhaustion of my life seemed to plant itself across my shoulders and heart: Every irritated time I snapped or yelled at them, returning moments later to apologize, explain I acted badly. Every missed birthday party and every time they’ve been the kid whose mom forgot. I knew I had been blowing it lately, and I was so tired, I almost cried right there in the damn parking lot. I knew I was making a big deal out of this, but I didn’t care. I refused to do it again.

“Go to class, George, and I’ll be right back with a stuffed animal. I promise.”

She beamed. I promised again and my lip may have quivered. I patted her head and felt remarkably pathetic.

My plan was to race to the grocery store down the road and hope for the best. It’s one of those fancy stores that sells triple-cream brie and bamboo cutting boards and homemade bread, but I was thinking maybe they’d have something in the balloon section.

They didn’t. I paced the store wondering what the fuck I was going to do. The baby aisle had a giraffe rattle. I considered it. Nope. I couldn’t. Too baby-ish. She’d get made fun of. But now I really couldn’t give up. I promised the kid, but I was running out of time. I decided I’d get a cup of coffee and race to Target, but I didn’t know if I’d even be back to her in time to do the activity.

As I was getting my coffee, I happened to glance down the aisle that leads to the back of the store, and on the clearance rack, happened to see the fuzzy top of some sort of stuffed animal. I think I actually said, “Oh thank god” out loud.

When I got there, I realized they were the leftover Mother’s Day bears. One said “I love you mom.” I considered it since she can’t read anyway. The other one didn’t say anything but was the most hideous shade of hot pink I’d ever seen in my life. Who the fuck makes a fluorescent pink bear with a rose? It was awful. Truly hideous.

When I peeked my head in the door, Georgia happened to be sitting at a table right near me. Her face burst into dimples when she saw me, and morphed into full on ecstasy when I held the pink bear out to her. “I LOVE IT!”

She hugged it. She showed her teacher. She was damn near bouncing.

As I left, I smiled, and thought, “Well, it was supposed to be a zoo animal of some sort – since it was a lesson on habitat – but George got a neon pink bear with a rose, and damn was she happy. You did good, Janelle.”

I felt restored by the slightly pathetic act. It was my tiny revolution, my refusal to give up. We do our best for our kids, and sometimes our best is a clearance-rack pink bear 30 minutes late.

I think they’ll remember the bear.

They’ll remember all the clearance-rack bears you give them, too, the face of a mother who keeps showing up, even if she’s not just right, and it’s almost too late. They’ll remember the mother who even removed the tags before she handed it to her.

I see you out there, doing the best with what you have, every damn day, and watching the kids race past, while you wonder if it’s enough and what they’ll remember.

It’s us who have to learn that it’s enough.

I think we can do that too, if we watch them closely, and learn. Love is love is love. Even in tardy fluorescent pink. 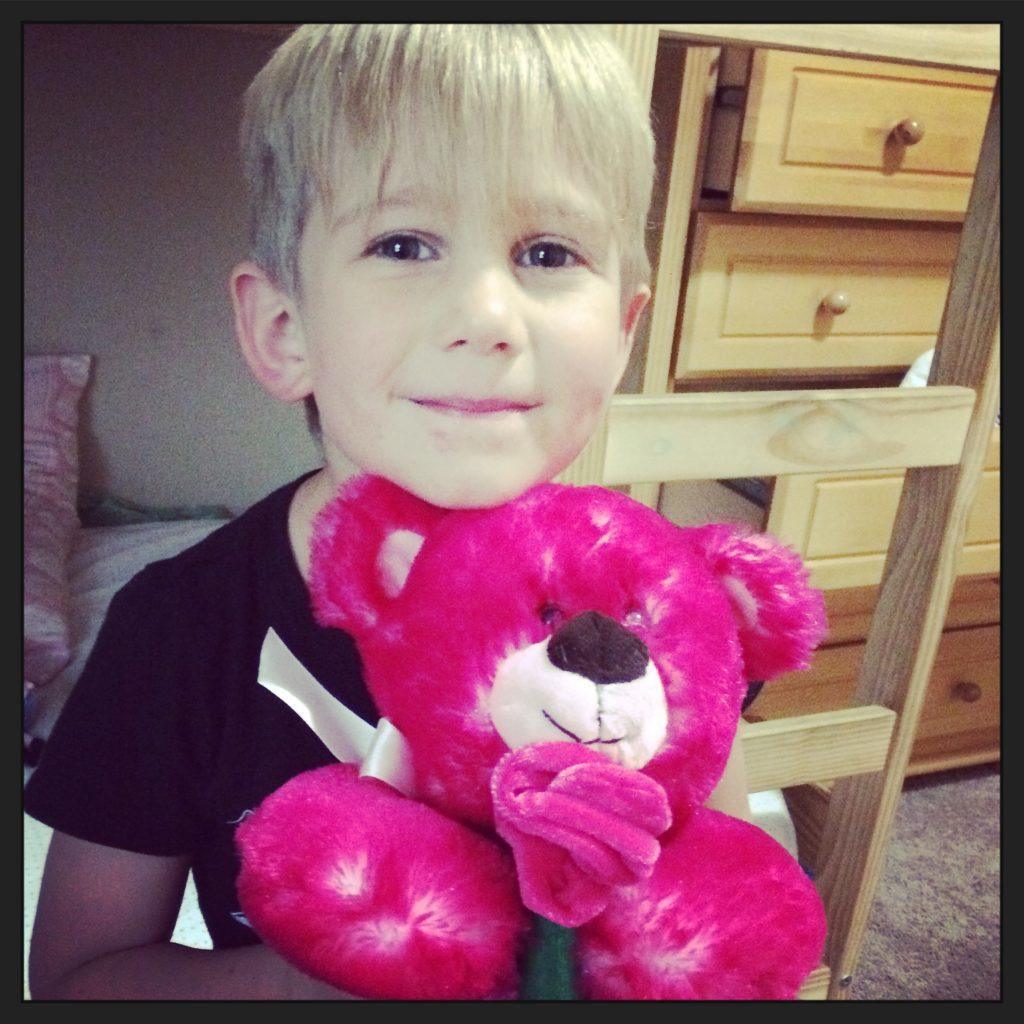 I’m supposed to be at an ashram.
Do you ever feel your family is in shambles even though it's technically probably not?
Here's a sandwich. It is not a train. Eat anyway.
Share822
Tweet
Pin1
823 Shares
37 Comments | Posted in I HAVE NO IDEA WHAT I'M DOING HERE. | June 16, 2016

Hey I just want to say thank you for your responses on my last post. I was really wrapped around the axle in my own confusion and insecurity and general weirdness, and you truly helped me see things in a different light.

You know how sometimes you just replay the same damn tape in your head so many times, and you can’t come up with something new, but also it all somehow feels like TOP SECRET INFORMATION so you can’t talk anybody? And then you finally talk to someone and they’re like, “Uh, what about this,” and things are instantly different and ya wish you would have said something sooner?

That’s what that was like. And I’m genuinely grateful. The internet can be such a fucked-up place, but we have a good thing going here and have for a long time.

I’m grappling with belonging and not belonging to two countries. And that is what it is. I’m in a pandemic and uncertain American landscape just like you, but different. And I’m going to write what it’s like here because that, also, is what it is.

These are my deep thoughts. I hope you’re impressed.

I had a friend tell me once “We aren’t in the business of outcomes.” I try to remember that, but when I’m afraid I want to control everything. I think if I just manage it all properly, I’ll feel okay again. Sadly for us controlling things is ALSO impossible and fun fact it doesn’t work anyway so maybe we just need to end up back at fuck it, it is what it is, and it’s alright—and trust our friends who tell us so.

Anyway here’s a picture of these two being cute. ... See MoreSee Less

One of my favorite things about this city—maybe

Hey I just want to say thank you for your response

Hello hello hello. I have been so fucking distant,

God these people are tedious.

God bless the president and the first lady. If you pray, please pray for their speedy and complete recovery — and for everyone infected, everywhere.

This virus is horrific and merciless — no one would wish its wrath on anyone.

We must get its spread under control. Enough.

Why can’t she debate Trump