How to stay positive in a dystopian wasteland

Maybe I’m alone here, but I’ve been feeling an overwhelming sense of cosmic dread. It’s kind of a mix between apocalyptic doom and what I imagine it would feel like to be consumed by flames while tied to a cactus.

Perhaps it’s the fact that a racist narcissistic turnip is running for President and at least 50% of American voters think it’s cool. Or maybe it’s that a major party here in the land of the free drafted an anti-gay platform. ANTI-GAY. People. Anti-gay. Because that is, apparently, in 2016, still a thing.

Or maybe it’s being gaslighted by the DNC and RNC and media, all of which insist on shifting reality into “WTF YOU TALKING ABOUT WHAT YOU’RE SEEING IS NOT REAL.” Sabotaging candidates, flashing Trump’s face so many times we forget what we’re looking at, calling plagiarism “not plagiarism” because “they are common words” (what now?).

And somehow Putin is involved.

Or, maybe it’s the fact that black people are shot for following police instructions or pretty much doing anything and #alllivesmatter is still around in spite of meme #5,356,945 explaining #blacklivesmatter, or that our police look like the motherfucking military and are being killed in Dallas and people are being mowed down in France while watching fireworks and US-backed action in Syria is killing civilians and cops are justifying the shooting of an unarmed behavioral therapist with his hands up by saying “Oh sorry we were aiming for the autistic man next to him. You know, the one with a toy truck in his hand? Yeah. Him.”

Meanwhile, the only hope we have against the turnip is disintegrating into a broken party and rage and everybody’s shit-slinging and yeah I loved Bernie stop calling me names, please.

And here we are. Parents. Trying to raise kids. In what feels a little like a dystopian wasteland.

We have to stay positive. We have to keep our heads up. Here’s how I’m doing it.

We can do this. It ain’t right, but we will (probably) survive.

Now what do you have? What are you doing to keep your damn head up?

I’m serious. I want some ideas in the comment section. 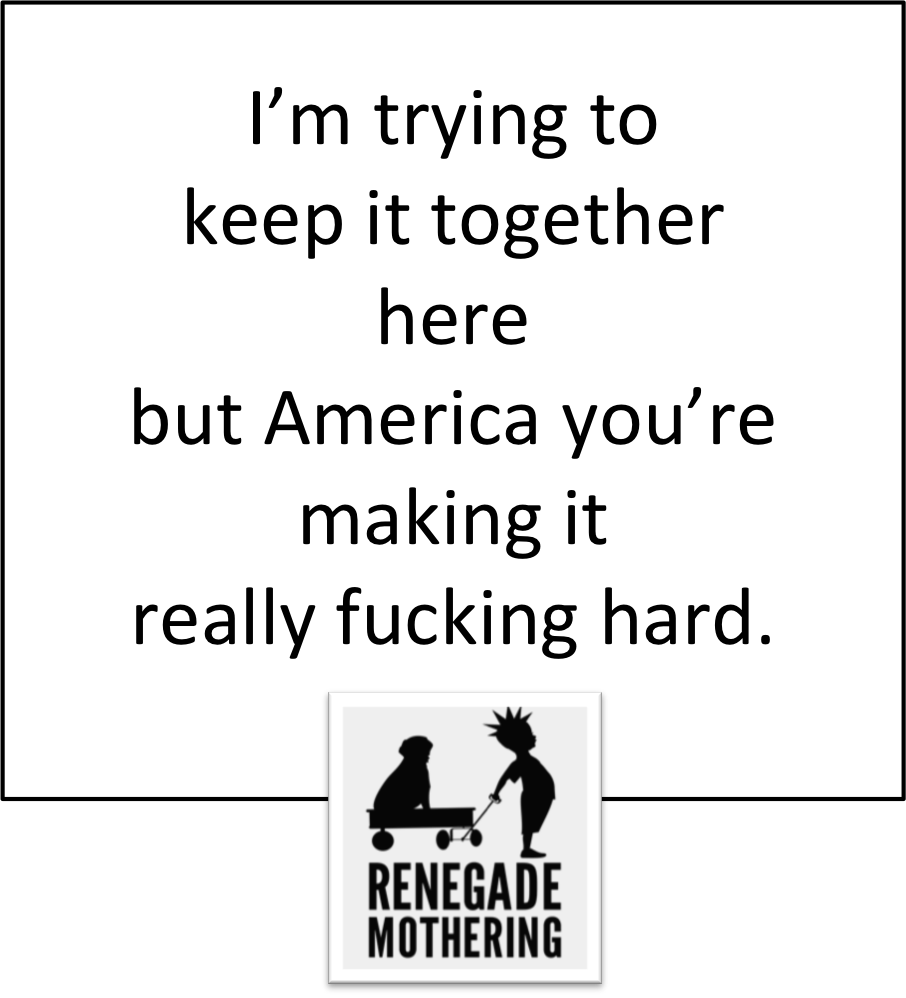 life is a stuffed seal at show-and-tell
Caillou's Plan to Ruin America
I sure loved it while it lasted.
Share25
Tweet
Pin
Email
25 Shares
129 Comments | Posted in Could this get me arrested????, I HAVE NO IDEA WHAT I'M DOING HERE. | July 28, 2016