On rage and helpfulness. Or, of course women are furious.

A few days ago, I sat at my desk reading two articles that outlined in detail Harvey Weinstein’s harassment, assault, and intimidation of women.

As I read about the way he threatened and assaulted women – placing them in the position of giving him what he wanted or facing his wrath – which could (or would) essentially ruin their careers, I began thinking of my own run-ins with men who believed their physical or positional power allowed them to sexually threaten, touch, or intimidate me.

I thought all the way back to the neighbor boys in grade school who pulled some shit when my mother wasn’t home, and the bra-snapping in junior high, and the older cousin who stuck his hand down my shirt while I was sleeping. It was a family sleepover. I woke to his hand on my right breast and him looking at me, silently, like, “What?” Stunned, I didn’t say a word. He removed it eventually.

I hated myself for not yelling. I was ashamed and humiliated. I assumed I had done something terribly wrong to make him think he could do that to me. I never mentioned it.

I thought about the boss in the restaurant where I worked as a busser at age 16, the boss who told me there was “one way I wouldn’t lose my job,” pressing his erect dick against my thigh as I stood pinned against the kitchen wall. I wrote about that here.

I thought about the boss I had in college who told me one day that he thought “it would be a really good idea if we had sex,” and I realized he may fire me if I didn’t fuck him. I didn’t. I began looking immediately for a new job.

I thought about all that, and how we elected a man who bragged about this exact type of assault and I got fucking angry.

I shared this post on my Facebook page and wrote these words: “#HarveyWeinstein, fuck you, and our pussy-grabbing president, and everyone defending the sexism of either of you. May you walk into the fire of a million women sick of your shit.”

I didn’t think about it. I just posted it, in anger. And then, I began receiving the standard disgusting comments one expects when one states such things publicly, but a couple of comments indicated that my anger was “not helpful.” And that got me thinking.

If I ever indicated that I’m here to guide spiritual development, well, I didn’t, because that would be delusional. I am a fucked-up, often immature, mercurial human being waking up each day and hoping for the best. If I were some sort of mystic, I’d be somewhere leading silent retreats with a stoic face, as opposed to here, at my desk, eating a cowboy cookie and wondering if you’re going to like my blog post.

I can say I do my best every day, but the fact is my “best” is occasionally (often? regularly? weekly?) rather pathetic.

I’m human at best. A complete asshole at worst. And every day feels like a battle between my higher and lower selves.

And yet, I’m not entirely convinced our anger on this front – the sexual assault/rape culture front — isn’t necessary and vital.

Because women have been told since childhood to shut the hell up about these small and large assaults because “that’s the way boys are.” It’s just “locker room talk,” you know.

We’ve been taught since birth to be grateful because it could have been worse.

We’ve been taught to be quiet because you don’t want to be one of those women, the ones who walk around accusing men of every little infraction. Consequently, women minimize and overlook and tell ourselves “It wasn’t that big of a deal.”

Later, at night, we shudder to remember. And later still, with our friends, we realize every single goddamn woman we know has been assaulted or molested or harassed at least once.

We’re taught to ask ourselves what we could have done to cause it. We’re taught that our bodies were made and built for male consumption – don’t get too fat. Don’t get too thin. Don’t show too much skin. Don’t use your breasts for breastfeeding. Don’t complain. Don’t attack. Don’t be too sensitive.

We’ve been taught to cover ourselves to avoid getting raped, to carry pepper spray and not get too drunk and look around at night while walking and avoid certain places – and we’ve been taught that this is mature, sound womanhood.

We’ve been taught how to WOMAN safely.

We’ve lived and breathed this information and LIVED and BREATHED it again – this way of being –  every fucking day since we knew we were “women,” and it’s all been done with an air of normalcy, an air of “nothing to see here, folks, just another woman trying to stay safe from men who want to assault her.”

SO FUCK YEAH WE ARE ANGRY.

Fuck yeah we get to scream for a bit. Fuck yeah we get to come out and yell that we are done living like this and it isn’t “normal” (or shouldn’t be), and we will fight and burn this shit down and maybe our fury right now is our fuel — some fire in our step, some flames to our voices, because we are tired of being attacked and silenced.

Attacked and told how to not get attacked again.

Attacked and told how to keep our daughters safe from attack.

Sometimes rage is the first liberating emotion. Sometimes we have to recognize we are furious before we can move on to other emotions.

Sometimes rage leads us for the first time to our voices.

I believe this anger needs to bubble up and out of us in one steaming explosion of united rage, so we can come together in the pain and love that moves past anger and into a planet that’s safe for our daughters.

And the nation made clear it doesn’t want to hear our voices.

We will be helpful when you stop violating our bodies in person and legislation.

Until then, rage on, sisters, because I know it’s rooted in love. Love of ourselves, our daughters and granddaughters and sons and grandsons. Sometimes love is fierce as hell – a fighting, relentless, burning thing – and the nation has made it clear it won’t hear our whispers.

We’ve tried that. It’s time for something else. We get to be furious. We get to fight. And we get to win. 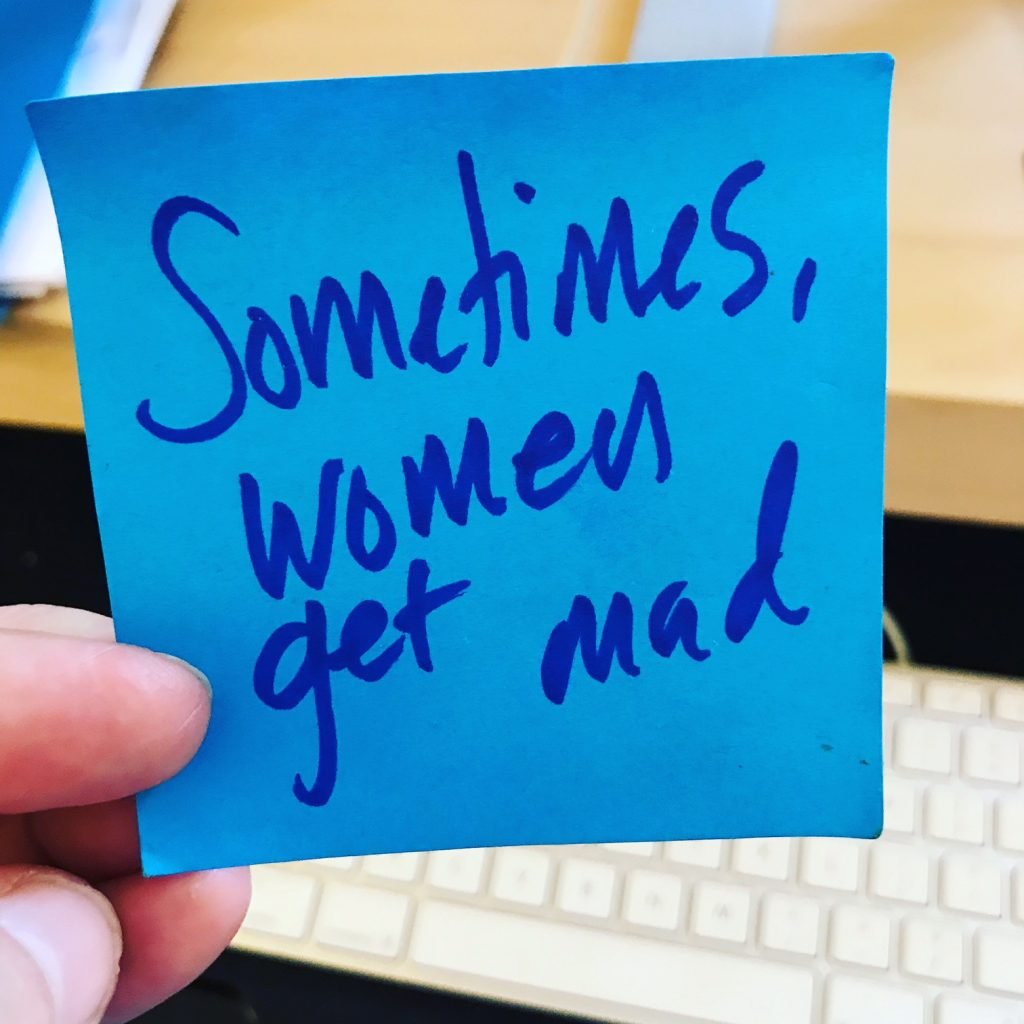 I wrote this note and stuck it on my wall after the conversations about my lack of helpfulness.