How I discovered I am white

When I was 14 or so, I asked my grandmother why we didn’t have a “white club” at school. I don’t recall her response, but I do remember feeling particularly smug and vaguely angry that there was a “Latino” club and a “Chinese” club but not a “white” club.

Oh the unfairness! Oh the disparity! Why do we celebrate their heritage but not ours?

And I didn’t think about race again, at least not much, until I dated an African American man in college and a stranger whispered “nigger lover” in my ear one night as he walked by us in a grocery store. I was shocked. My boyfriend was less shocked.

I concluded the stranger was some strange exception of horrible racist creature. He was, after all, approximately 97 years old. (Well, 70, but he appeared 97 to my fresh young eyes.)

And then, a few months later, when my boyfriend’s roommate took me aside and asked why I have to “take a good black man who was in college,” when so many black men were incarcerated. I concluded she was crazy. And mean.

She hurt my feelings. Poor Janelle.

Beyond these few moments, and a couple others, I didn’t really think about race. Well, I thought about how people made arguments “about race” when clearly they were not. I mean why do they make race an issue? It’s not an issue. I never see it.

Oh yeah, I had America all figured out: If ya work hard, you get ahead. And if you don’t get ahead, it’s because you made bad decisions. And if you get arrested it’s because you’re breaking the law, and people who break the law are more likely to be black. Obviously. That’s why they’re always getting arrested. (How’s that for some cyclic logic?)

I knew this to be true because:

I learned it in school. It was fact. School teaches the truth.

And then, graduate school, and Professor Lee.

She made us repeat it like a mantra. At least 3 times. I read Tim Wise’s White Like Me and bell hooks and David Roediger’s Wages of Whiteness and learned how our economic systems benefit from racism and we read about the history of American immigration laws (have you ever read them?) and colonialism in the Philippines and elsewhere (yes, America has colonies but we call them “territories”), and we read about redlining and white flight (ever wonder how black people ended up in urban centers?), and we read some DuBois and Omi & Winant and literature by people of color and all of the sudden I realized I had been fucking lied to.

I understood America through white eyes. I understood the world through the mainstream, polished glasses of a nice clean history of “we used to be bad now we’re not the end.”

I discovered I was white.

Yes. Even me. Even though I am not “racist.”

How? And she explained whiteness. She explained that “white” is the standard. White is the background against which difference is measured.

White is the standard. And I’m white. Therefore, I am standard, and that benefits me.

When I walk into a room, I don’t fear that I’m representing my whole race. I have never acted badly then thought to myself “Oh shit, I sure hope they don’t hate all white people now.”

Or, in other words, even though pretty much every Columbine-type-school-kid-murderer is white, I’ve never developed a distrust for white, socially awkward high school kids.

A few do not represent the whole.

“Privilege is passed on through history.”

Whatever. I grew up POOR!

But then I thought about how, in the late 1940s, my grandmother was the first woman editor of the University of Washington’s newspaper. After she graduated, she and my grandpa bought and ran small newspapers in northern California. The family business they built employed my family members for 40+ years.

In the late 1940s, black people were not allowed to sit in the front of the bus.

How can I deny that my grandparents’ access to education and economic success did not materially affect me in a positive way, directly, through my father? I thought about the loans my parents were able to take with financial backing from my grandparents, and how that benefitted me. My life. My quality of life. The neighborhoods we lived in. The schools we attended. My cultural knowledge.

“Why don’t we have ‘White History Month?’”

Because White History Month is every month other than February, asshole.

“The culture of power determines which version of history is told and retold.”

Prior to the Women’s Rights Movement, women were stuck in the home while men went to work and supported them. But then women were liberated and able to get jobs working outside the home.

So one of the most oft-repeated, trusted narratives about American history erases the history of women of color. It is dead fucking wrong. It isn’t even kind of right. They are erased. Non-existent. Unseen.

They are Chapter 10. They are a chapter that ends with “but then Martin Luther King, Jr., and all is well.”

They are Chapter 10. I am chapters 1 through forever, and every day I cash in on that fact, whether or not I support the systems making that happen for me.

I was able to hang out in meltin-pot, “post-racial” land because the structures of this society allow (and encourage) me to “not see race” while continually feeding me narratives about “equality,” “multiculturalism,” “color-blindness” and “ghetto urban lifestyles.”

I spent a lot of time in graduate school in the library, writing at a computer. Like, hours. Whole days. When I had to pee, I would ask the person sitting next to me to watch my stuff so I didn’t have to pack it all up and carry it down the hall to the bathroom. I did it a 100 times.

Once I looked over at the person next to me and my first thought was “Oh you can’t ask him. He’ll steal your stuff.

He was a young black man wearing a gray hooded sweatshirt.

I was sickened at myself. I was horrified at my response. There was absolutely nothing different about him from the 100 other people I didn’t hesitate to ask, except he was black.

I realized that not only do I benefit historically and presently, every day, from the color of my skin, I have also internalized cultural narratives regarding blacks and whites that manifest whether or not I support them.

“Hey, would you mind watching my stuff for a minute?”

It means that we live in a highly racialized society rooted in a history of discrimination and that we have a long way to go. It means that watching “The Help” and feeling bad is not enough. Sentimentality is not action. It means that I have had an advantage over people of color. Yes, always. Yes, no matter what. Because even if you’re poor and white you can join the culture of power by learning the walk and talk. But you can’t change your skin color.

From the day I was first introduced to this “other story,” I couldn’t get enough. Not because I’m some sort of saint or conspiracy theorist, but because I was curious. I was interested out of a sense of shared humanity. And I was fucking angry that I had been swindled. I wanted the truth. Or, I wanted a fuller picture. I wanted more sides.

That, my friends, is pathetic in its privilege.

But when this information was presented to me I felt a sense of relief, because I think deep down I always knew something was terribly wrong, but I couldn’t put my finger on it.

I don’t understand the white rage I keep reading on the internet.

He got what he deserved.

Run over the protestors. They’re making me late for work.

I don’t understand it. What’s at stake, people? What’s at stake in accepting that racism exists? Or even entertaining the thought? Are people really so stupid they can’t fathom that other people might be having a different experience than they are? Is it really that hard to comprehend that something can exist EVEN THOUGH YOU DON’T PERSONALLY SEE IT?

(Although you’ll see your privilege if you’re willing to examine your life honestly.)

Why the hell are people so unwilling to listen?

Let’s think about this for a moment. A whole community of people are saying this exists. Data shows racial disparities in economic, education, justice, and healthcare systems. Basically, ALL OVER THE PLACE. Unarmed black boys and men are killed without recourse. Repeatedly. The comment sections of these crimes are riddled with assholes shouting “Good. One less loser.”

Still people claim “Racism doesn’t exist.” But here’s the thing: The only way you can discount the words, lives, efforts and voices of hundreds of thousands of people is THROUGH THE RACISM YOU CLAIM DOESN’T EXIST.

You can only ignore them if they’re aren’t worth hearing.

You can only ignore them if they’re liars. If they’re just looking for a handout.

You can only ignore them by using the very narratives you claim aren’t happening.

And let’s be honest, we can only ignore them because it’s easy, because we’ll never have to walk a day in their shoes, and it’s just so much more pleasant to turn away, look away, focus back on our lives.

But the sand is getting skimpy and our heads are showing. At this point, if we’re not part of the solution we’re part of the problem.

We’re at a crossroads. This cannot go on. We’re crushed under the weight of hatred, history, silence, violence, bullshit media and the insidious defense of systematic unequal distribution of resources, and at some point, none of us will be able to breathe.

It feels small and pathetic to be one person in this mess. I feel stupid and vulnerable and slightly insane to be writing this here, now. But fuck my feelings. Fuck feeling uncomfortable. Fuck the nonsense that keeps us quiet and content and cozy in our little post-racial dreamland.

And that is precisely the problem. 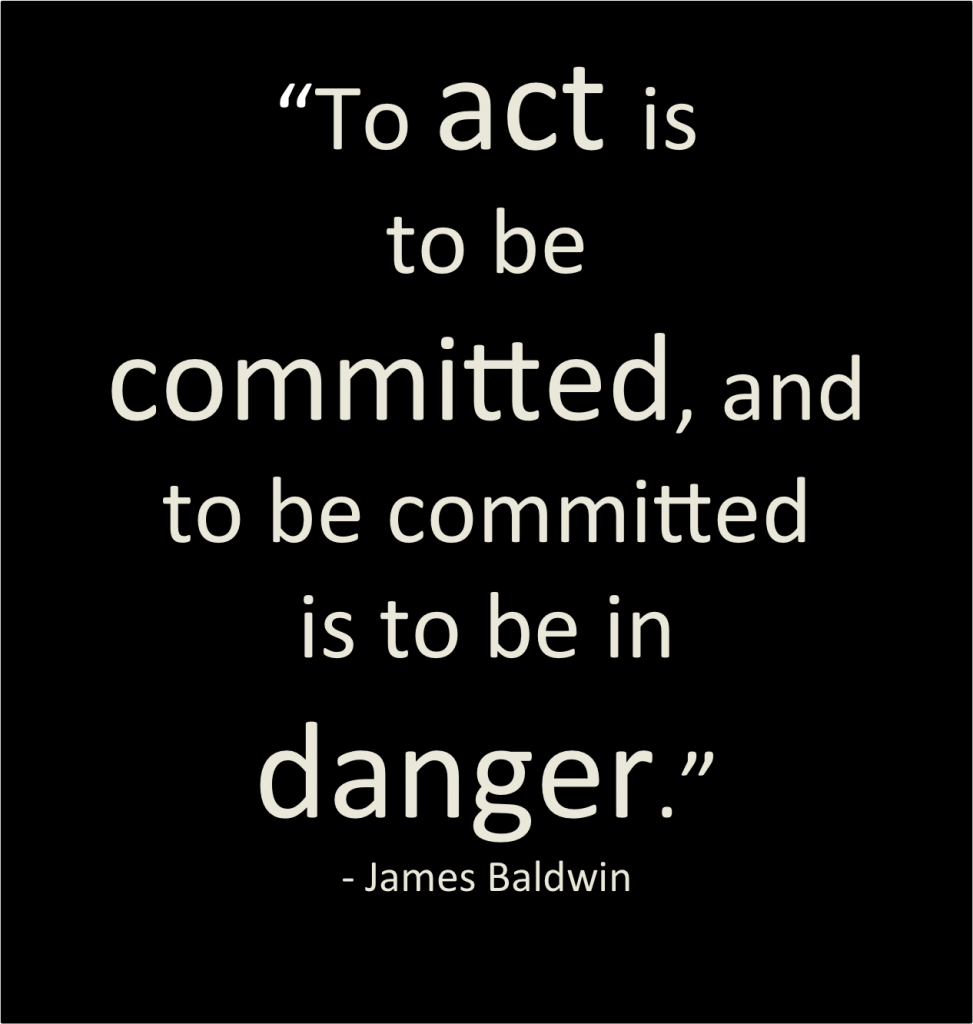