Imagine all the people trying not to be dicks

So the other day I was at Costco. For our overseas readers, Costco is grocery store on steroids. Everything in is it huge, bulk, wonderful. I love Costco. It’s very American.

I shop there often because my family somehow manages to consume like 3 loaves of bread and 2 gallons of milk a week, even though I rationed milk consumption to dinner-only since the kids kept getting dehydrated in this fucking Valley heat.

Why do I admit these things online? There’s something wrong with me.

Though I’m technically there for “staples,” the miracle is that once I enter those giant roll-up doors, I realize I pretty much need every single thing in the damn warehouse, but none of this has anything to do with the story.

So anyway, against my better judgment, I venture into Costco with all four kids. Yeah. That’s three plus a newborn, folks. I knew I was playing with fire. It was like 3pm and 104 degrees or some nonsense. 3pm sucks. Everybody’s tired and miserable and generally over it, but rather than staring at walls at home (or napping), I’m towing them all through the sun-kissed aisles of ridiculous American consumerism. The baby was asleep in his carseat but I knew it wouldn’t last. He’d been asleep too long. Georgia was nearing the point where her exhaustion turns into squirrel-on-crack behavior. Bouncing off the walls, I believe it’s called.

And the two other kids, well, they’re pretty reliable. They behave in Costco. MOSTLY.

My coffee had worn off.

The kids were hungry.

So, why, exactly, why was I doing this?

Because I was having a little dinner party for my mother-in-law’s birthday that evening, and I had no food, as per usual. No choice, motherfucker. GET THIS SHIT DONE.

We do okay as we walk through the aisles. I was going quickly. There were samples. I thought I might actually pull through without disaster.

Then we hit the checkout line. It became very, very clear to me that I will not pull through.

The baby starts doing that closed-eye head-turn “wah wah wah” thing. The fists start shaking, the legs kick a bit. Of course I start pushing the stroller back and forth, doing the frantic “Shh shh shh” thing, but I know it’s not going to work.

He settles for a moment. Five seconds letter he’s back at it with more force.
“Fuck. Should have put him in the carrier.”

But I didn’t want him on my body. IT’S 9 MILLION DEGREES and the thought of 30 minutes in air-conditioned Costco without a sweaty head and 20 feet of material across my chest just sounded too amazing. Sometimes we need our bodies back for a moment, ya feel me?

I glance at the line ahead of me and see the slowest moving humans on the planet. They’re enjoying a chat with the checkout dude. I realize this hell is my own.

The baby’s really getting worked up now. I remove him from the seat but he wants to nurse, bad. It’s been over 2 hours at this point. He’s clearly wondering how he’s managed to stay alive this long.

I hear a woman say “Honey, sit down! You’re going to fall!” I look back and see Georgia attempting to STAND in the cart (which the 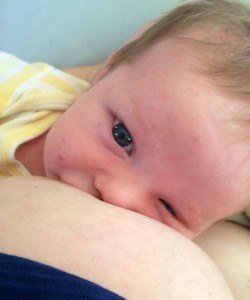 kids were pushing). With the baby in one hand I grab Georgia with the other, tell her to sit down. She ignores me. She’s been ignoring me lately. I can’t figure out if it’s a fun feature of age 3 or some twisted symptom of my-mom-just-had-a-baby-and-I-hate-life syndrome. At any rate it’s loads of fun!

I curse myself for not bringing the carrier inside. I consider leaving the checkout line completely and nursing the baby in one of those giant chairs in the furniture area. But the dinner party. I don’t have time. And his diaper is wet too. Nope. I have to plow the fuck through. Get through this line with a screaming newborn and horribly misbehaving toddler and the card and the wallet and groceries and the cart and stroller.

By this time, Arlo is wailing. I’m bouncing him on one arm and pulling the toddler into the seat and trying to use my nicest voice (as opposed to my “I’m going to fucking kill you” voice) to tell my older kids to please load groceries onto the black moving belt thing (WTF are those called?) and I realize in a flash that I look absolutely pathetic. My shirt was even pulled up a bit, exposing stretch marks and a belly modern society would call “fat.” I’m straddling the line of humiliation and PURE BEAST MODE.

The dude asks me for my Costco card. I’m trying to buckle Georgia in with one hand and soothe the baby and direct the other kids and get the card and pull my shirt down and move the cart through the thing.

People are looking at me. I’m terrified of keeping them waiting.

My god in that moment I swear I almost looked at complete strangers and asked “Would you HELP me?”

But I didn’t, because we don’t do that sort of thing. Nope. This is America, where each human fends for herself and a dumb broad like me, well shit, I’m the one who decided to have all these kids and go to Costco and whatever, whatever.

Sucks to be her.

HURRY UP, pathetic mommy, so I can get home.

Honestly, I can’t believe somebody didn’t intervene solely because it was too painful to watch.

I’m a tough sonuvabitch. I’m tough as nails. I don’t break easily and this ain’t my first rodeo, but you know what? Sometimes we need help. Sometimes we need somebody to take a minute or two and just HELP. I never ask for help, but I would have proposed marriage to the human that lent me a hand in that moment.

But nobody did. And that’s cool. I don’t deserve shit and I’m not entitled to anything. I knew I’d survive, and I did, and I don’t feel sorry for myself.

But I made a decision right then and there that the next time I see some human struggling, I’m going to help her. I probably would anyway, but from now on it’s a self-imposed requirement. And I’m going to make my kids help strangers when it’s obvious they could use a hand. We live in a community. When the fuck are we all going to act like it?

Of course we don’t have to. Of course it’s not our problem. But you know what is our problem? Not being a dick.

And as far as I can tell, watching some pathetic, overwhelmed woman like me in the Costco checkout aisle while glaring at her angrily is, in fact, being a dick.

Try not to be a dick.

Marianne Elliott (author, yoga teacher and human rights activist) had me at this question: “Do you wish you could find the courage to do what you really feel called to do?”

Well, until I read this one: “Do the voices in your head tell you that you can’t do it because you are not ready, not qualified enough, not good enough?”

You know, the thing is, you know when somebody is speaking your language,willing to speak the truth, and brave enough to face the real shit.

Marianne Elliott strikes me as one of those people.

She’s enrolling now (deadline is August 1!) for her online class 30 Days of Courage, which is meant for “people who want to step out of their comfort zones” and lead a more courageous life. (Is it wrong that I immediately think about traveling the north American continent in a trailer with my family? That’s what I’m into lately.)

In her words, you’ll learn:

• how to build a stable foundation for your courageous life; • practices to cultivate your innate inner courage; • ways to use curiosity and experimentation to sneak past the guards at the gate to your comfort zone; • how to find the small act of bravery that you can do right now; • exercises to tone your courage muscles; • practices to ensure your courage is also compassionate.

She offers all kinds of other classes too. Check them out.