“Can two people be in love forever?”

“Can two people be in love forever?” – CL

Second, I somehow ended up in a happy one.

As you may have observed, cohabitating with one human is never fun all the time and anyone who says it is is definitely lying. I realize these fabricators seem real on Instagram with their sun-kissed beach photos, but All-the-Time-Blissful Marriage is not a fucking thing.

Generally Happy with your Life Partner, though, IS a thing.

And that’s the thing I have.

I’m not sure how or why we ended up here, and while I’d like to say we fell in love got married bought a house and built a life in some organized trajectory of soul-mate goal-setting, the truth is we did everything wrong. 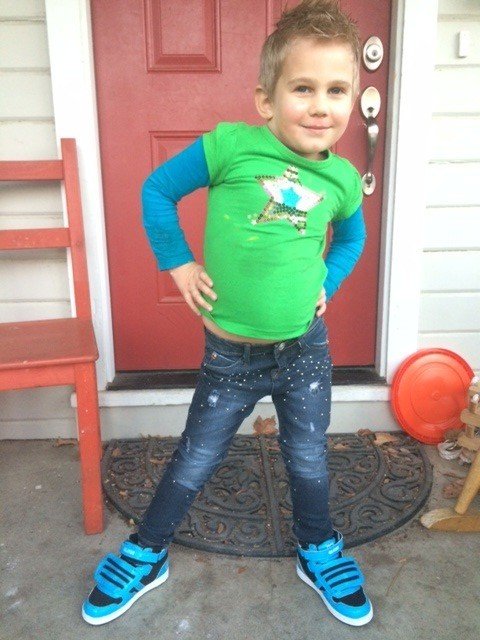 Well, apparently not everything. I mean, look at George. >>>

We met too soon, had a kid too early, and separated for a year or two, here and there. And yet, on December 19 we will celebrate our 14th anniversary, and I will probably think “Well I’ll be damned, I’m happy,” and I love him, a lot, even more than 14 years ago, which surprises me, and feels odd.

Sometimes, I want to kick him in the shins because he drives me around the bend. But I don’t want him gone. And I never think of my life without him because I don’t want it. At the last, he’s my best friend, and I like hanging out with him, and I like the life we’ve got going together, and that’s enough for me.

So I don’t know if people can be in love forever. I don’t know much about marriage or love, but I’ll tell you everything I’ve learned so far.

I think we’re sold a lie about marriage and romance. I think it starts with romantic comedies. I think we grow to believe “real love” looks like the first 6 months of a relationship extended over a lifetime.

I think we’re told that if our love doesn’t look like the end of a Meg Ryan movie, all the time, even 7 years into it, there’s something wrong with our relationship, when actually nobody’s love looks like that. So in other words, YES, there is in fact something wrong with it.

There is always something wrong with it. The point is to get okay with the shit that’s wrong, or leave. We spend so much time trying to “fix” what’s wrong. What about asking ourselves “Can I live with what’s wrong?” And if the answer is “no,” then I guess we work like hell to get better, or we leave.

But often, I’ve found, the answer is “yes.” I can live with that. It’s not perfect, but it’s okay. It’s not a deal-breaker.

I think a lot of Happy Marriage rests in letting shit go that doesn’t matter, even though our egos may tell us it super dupes matters. And this extends to personality flaws. Sometimes giant ones. For example, my tendency to yell and swear-off our marriage altogether at least twice a year, and his, well, flaws. I’m sure they’re there.

I jest. He’s not perfect. But I don’t feel compelled to put Mac up here on the chopping block since he can’t defend himself. I will say, “He will never be the man who straightens the fringe on the carpet” (we have no carpet with fringe but I’m using that as a metaphor people). He will never be the one carefully planning shit in our lives (wait. I don’t do that either. WHERE IS OUR FAMILY PLANNER? Oh right. Ava.) He will probably never organize the garage. He will definitely always forget to put the kids to bed on time.

He will never have the Type A, assertive, GET ER DONE attitude that say, his wife has, and that annoys me sometimes because I can’t do everything! But then again now that I think about it you’re totally going to do it wrong so please just let me do it.

For example, he lives with that. And I live with his tendency to leave giant metal objects on our front lawn. No, leaning against our house. He’s moved on from the lawn.

No but seriously, we have some differences in communication (in short, I move IN YOUR FACE and he moves IN HIS SHELL) that are tough, and sometimes we go months in this push-pull thing of me demanding WE ADDRESS SHIT and him pretending I’m not there.

But eventually, we come around. Both of us. He talks to me and I remember I’m sane and the truth surfaces and we end up together, maybe in tears, maybe holding hands or hugging, but for sure remembering who and what and why we’re here, and that we fucking like each other and our kids as a little unit and would rather have each other than not have each other. And that’s our Meg Ryan movie.

We know we will get okay again, and that it will be enough.
I think we’re told our partners need to “fulfill” us. I think this is bullshit. I think we “fulfill” ourselves and bring that to the motherfucking table, as a service to our partner, and ourselves. I don’t want to be responsible for “fulfilling” anybody. I’m a broke-ass broke down human. I can support the shit out of you, and tell you the truth, and be your friend and kiss your lovely lips, but I don’t want your identity on my shoulders. I can hardly handle my own thankyouverymuch.

Nobody can fill the gaping hole in me because they’re too busy running around trying to fill the gaping hole in them and we’re all just pathetic little humans full of fear and wonder and selfishness and I will absolutely let you down. I gotta fill my own shit. I gotta get okay with the tragedy and beauty of my own gut situation before I can look at you, be your friend, your lover, your anything.

I think this is a truth nobody talks about but we should teach in schools: If you want your life to change, look within.

It’s not fun. It’s much more fun to blame everybody us, but in my experience I am pretty much always the problem. Even if I’m in a genuinely fucked-up situation, one may ask “Um, okay Janelle, sure this situation sucks donkey balls, but what got you here in the first place?”

Or, my personal favorite: “Why, pray tell, are you still here if you hate it so much?”

Then again, sometimes things happen for no reason other than because life is a torturous bitch. One 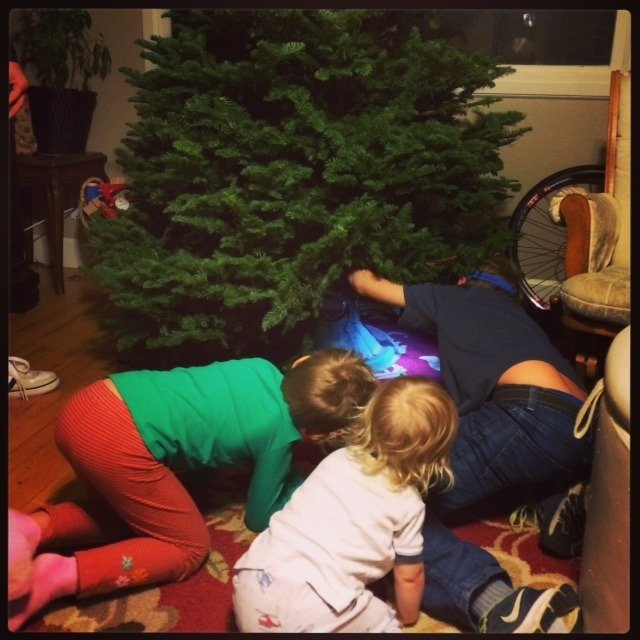 day she’s got three of your kids watering the Christmas tree under the light of your son’s headlamp. The next day she’s taking your friend in a car accident. That actually happened. RIP, beautiful Vanessa.

These are times I need you. And you need me. Let’s be there. That matters. That’s friendship and support, not existential fulfillment.

I spent a long time analyzing Mac’s faults. I spent a long time trying to fix him to meet my expectations, mold him into my vision of Perfect Fulfilling Life Partner. I spent so much time focused on that I failed to see him for what and who he is: A damn good, loving, loyal and kind father and husband. Things started to change when I got so desperate I stopped looking to him to “make me feel good” or “make my life meaningful.” I said “Fuck it. Fuck everything I know about ‘love.’ Fuck the Hallmark cards and Meg Ryan movies. I guess this is it.” I decided to focus more on what I could give than what I could take.

And I finally felt in love. This was weird. I did not understand this.

I think we misunderstand love. We think it flows from outside into us, which is true, we feel it from others, but mostly in my experience if flows from me outward but the effect is the same and I can only see clearly without resentment and expectations and fear. And love is the only thing that gets rid of resentment and expectations and fear. It seems very active to me. Like a choice, not a thing that merely exists or doesn’t exist between two people. It’s not passive. It moves. It lives.

I guess I learned that my ability to love comes from me. Not him.

Love flows out. And then it flows in. Can that last forever? Maybe. I don’t know.

But I think it’s enough for today.

I think sometimes we give up too soon. I think sometimes we stay too long. I think it’s hard to face the truth. I think mistakes can end up in beauty. I think sometimes our love gets buried beneath so much fear and resentment we can’t see which fucking way is up. I think sometimes love goes underground and we have to just keep showing up until it pops up again and I think over the years love changes from gazing into each other’s eyes to seeing your whole history in somebody’s eyes and that transition isn’t expected.

One day you look at a man and realize they’ve been with you since you were 21, and damn near all your memories hold their face and rather than a fiery romance of hot sex on the couch your love becomes steadily burning flames in the old woodstove nobody notices, but realize it’s just as powerful and hop in the fucking sack at year 14 of marriage, 4 kids, 2 people, taking it easy in a bit of love.

Can that last forever?

Who the fuck knows. I don’t know about forever. I only know I’m happy to meet him today for falafel, with my other dear friend Sarah.

And that’s enough for now. And old Emily Dickinson says “forever is composed of nows.” 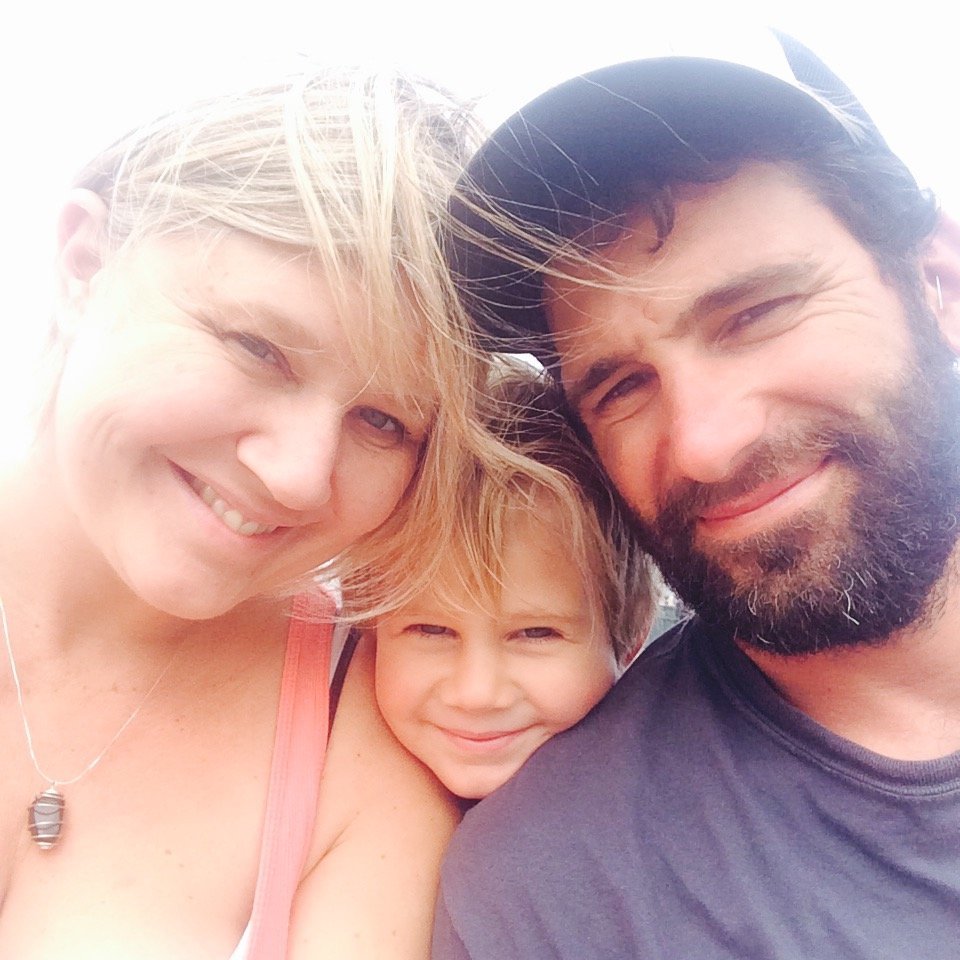 Heyyyyy, there are only 5 spots left in  my January writing workshop.

You should probably grab one of them. Or all five. TELL YOUR FRIENDS.

Do chores. Get lucky.
Honest Valentines, for Married People
My husband and I went to Chicago and remembered we don't hate each other.
Share1.64K
Tweet
Pin7
1.65K Shares
34 Comments | Posted in Ask Janelle, cohabitating with a man. | December 10, 2015

Every time I get excited about FINALLY REACHING THE BOTTOM of the laundry room dirty clothes pile, I come downstairs to this.

HOW WHY HOW ... See MoreSee Less

I could say more, but other Latino writers have already said it better: @lesbrains

I am an immigrant. My family fled El Salvador with death pounding on our door. The terror, the loss, the injustice of this experience shaped everything about me. I see no part of myself reflected in #AmericanDirt, a book white critics are hailing as the great immigrant novel.