My husband and I went to Chicago and remembered we don’t hate each other.

How the fuck is somebody supposed to stay married and happy while raising children? Is that even a thing?

Mac and I are “happy,” sure. In the bigger picture, if you zoom way out and look at us from, say, Saturn, we’re the happiest motherfuckers who ever lived.

But on a daily basis, we more resemble two individuals who low-key hate each other. I’m something of an irritable, impatient asshole, and he eats chips too loudly.

No for real though, I don’t get to shred my husband online because I’m not that big of an asshole, but he has idiosyncrasies that often make me want to stab myself in the eyeballs with small sharp sticks, and I have those too, and we’re just fucking over our lives a good portion of the time.

We bicker a lot, lash out at each other regularly, but the big shit is gone. Separation is not on the table. We haven’t been a question in at least 9 years. And yes, if you do the math, we’ve been together 17. IT HAS BEEN A LONG ROAD, OKAY?

We have more of what I’d call: I’m tired and you’re irritating me.

Those Instagram couples traveling around the world with their legs entwined and chakras aligned, enjoying deeply spiritual sex next to a lake and strategically placed canoe, are living a slightly different life than we are.

We work. We drive. We take care of kids. We clean the house. We cook. We try to pay off student loans. We plan.

And in between, we try to be a married couple.

It’s a lovely idea that we “put marriage first,” but in my experience, this is easier to say than do. Kid needs are more immediate. It’s easy to set marriage aside when being pummeled by ninety different kid issues.

And yet, we’ve done okay at it.

If you lower the bar significantly.

I’m not sure if it’s self-centeredness or a mature devotion to Keeping Our Marriage Alive, but Mac and I have always insisted on going out together, alone. Let’s say it’s the second one, although really, does it matter? We are vaguely old and definitely tired, and it’s often a huge pain in the ass, but fairly regularly, we go hear bands or see plays or go to dinner, alone, or with friends” sans small people.

But the truth is, even with our little “dates,” which often leave us doubly exhausted the next day, we sometimes spend our time together rehashing bullshit in our family – talk the whole time about some kid, or some situation, or a fight we had five years ago but must address again just for funsies.

And sometimes, if we go on long enough like this, I can forget what we are, what we were, what we’ve always been.

For the first time in fifteen years, Mac and I went on a trip together, alone, for more than a weekend. We spent five nights away together, in San Francisco for a night, then Chicago.

It was a celebration for the publication of my book. I wanted to make sure he came on tour with me at some point, and since neither of us had really been to Chicago, and it’s quite far from our lives (and thus feels pretty special), I rented us a fucking 39th floor condo (with a rooftop hot tub) in downtown Chicago and we went to Hamilton and ate the best food in the world (for real, wtf, Chicago? How is your food so good?), and we strolled around the Art Institute and slept in and had a lot of sex (sorry for saying that, Dad), and held hands walking down the street at 1am and at one point, I looked over at him and realized I was remembering that he’s the best friend I’ve ever fucking had.

And still the hottest man I’ve ever seen.

And maybe the kindest, and warmest, and with everything stripped away, with a few days of “just us,” I saw our 17 years together, with all the distraction and mayhem and separation and beauty and pain, as nothing much beyond “just us.”

At its core, it’s always been “just us.”

We went to Chicago, and remembered we don’t just love each other. We really fucking like each other.

I’m not telling you to do that. We were lucky as hell and it was a great privilege (as I say, once in 15 years), but I guess what I’m saying is that such things are possible, and I wonder if we really tried, if I could pull from those moments a little more often, to look at him and see my friend – my friend, apart from the rest, always, just a touch – and trust he’ll see me the same.

Or that we can, at least, head back to Chicago, if not in body, in a little bit of soul. 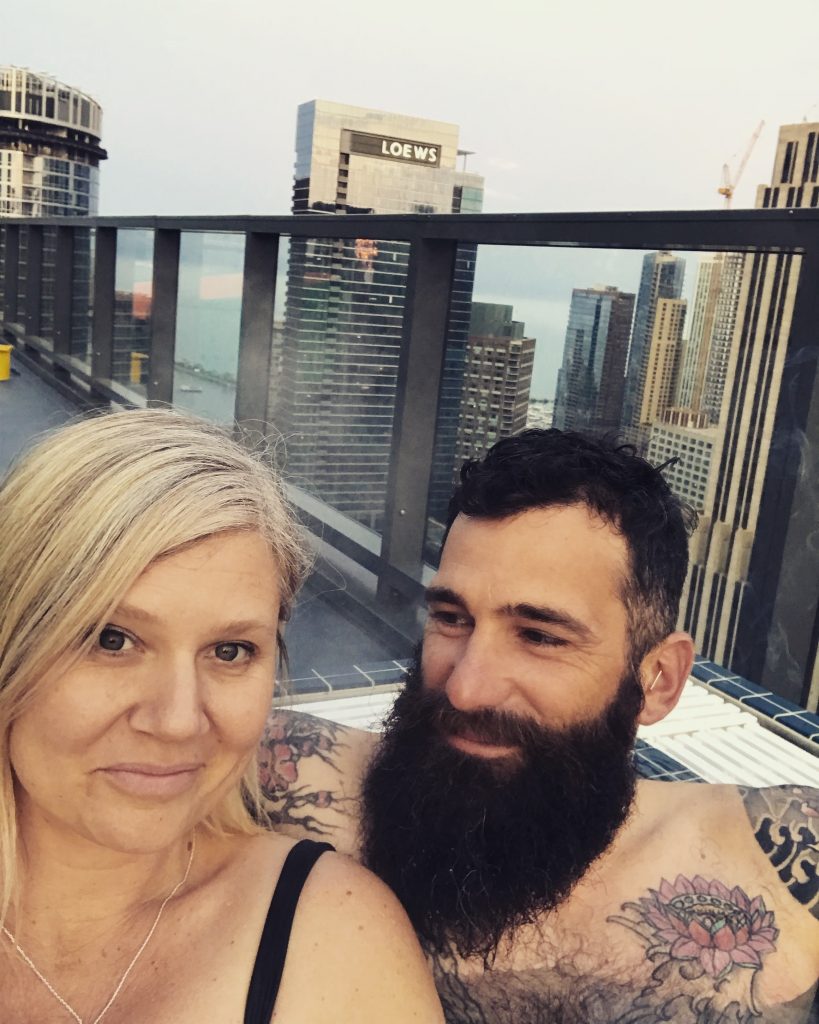 I took a selfie but caught him looking at me instead of the camera which kind of gives me feelings.

Hey friends, you’ll notice that there’s a little slide-in pop-up with my dog’s face asking you to subscribe to my newsletter. I have written this blog for seven fucking years and never engaged in such behavior (the pop-up. dog face is irrelevant).

In short, I’m doing it now because Facebook is a fucking dick who shows my posts to virtually nobody, and I don’t have $2k per post (not kidding) to throw into ads, so IN OTHER WORDS, I have been forced by The Man to invent ways to get my work to you to feed my family and sell my book to keep writing and you know what?

I hate this. It’s weird.

But the facts remain. Here we are, and I’m immensely grateful for every single one of you.

Also, your messages and emails and comments about said book. I am overwhelmed, but more on that later. I think I need to talk to you in a Facebook live video (and…back to that bastard). I can’t explain it all right now.

Also, when you sign up for this shit (my newsletter), you will get an ebook I wrote called “To the Mom who Thinks She’s Disappeared.”

No answers, of course, but I definitely see you.

GET ME IN YOUR INBOX

And then she started inventing bumper stickers...
Honest Valentine's, For Married People (Vol. III)
Santa turned my kid into a crackhead!
Share1.2K
Tweet
Pin1
Email
1.2K Shares
24 Comments | Posted in cohabitating with a man., Things I shouldn't say out loud let alone Publish on the Internet... | May 21, 2018