Five years ago yesterday I wrote the first post of this blog. I had been crafting it on my drive to work and in the shower and back again and all around. In fact, I had been “writing in my head,” also known as “thinking,” for many months. All the things I’d like to say about motherhood. All the things I’d like to read but can’t because nobody seems to be writing them. 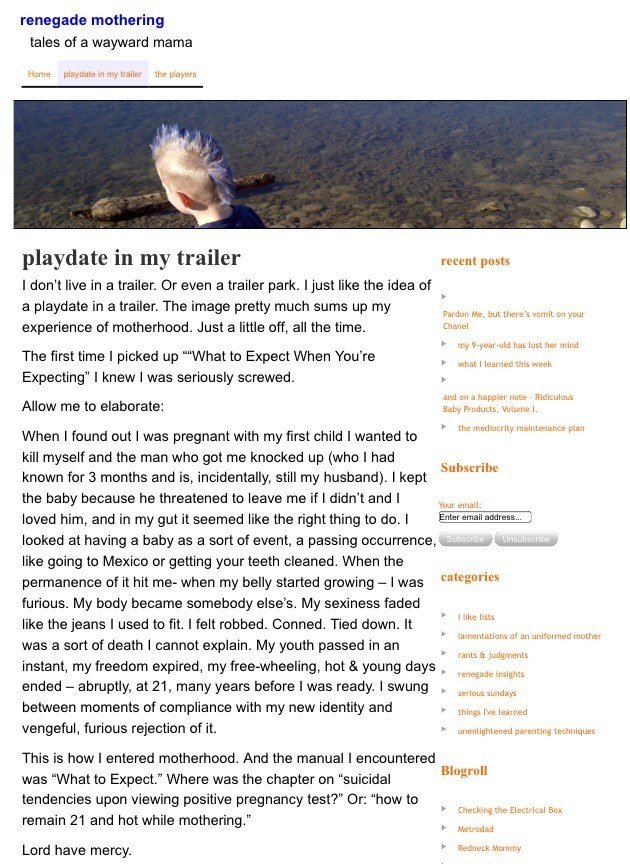 the original logo was Rocket’s head

Five years ago yesterday I couldn’t take it anymore, so during my lunch break and possibly a little after, I hid in my cubicle and put a blog together with one of those built-in WordPress themes and I wrote the words that came to me.

At the end of that first post, I said I was going to write a book someday on motherhood.

Yesterday, I sent off the final draft of my book proposal.

So life, because it’s a wily-ass-motherfucker, planned it all out that exactly 5 years to the day after I sat down to write my first post, I would take a huge final step toward publication of my first book, which I promised in that very post. Now what kind of bullshit is that?

Also, spoiler alert: The proposal may not be final. These things have a way of evolving. Also, the book is not published yet. It’s not even bought yet. I am not at the end. There is no end. There is no arrival. That’s the way with writing. And probably life, right?

But there’s something about this marker, something about the synchronized moments of the beginning and its promise and this big step. Please don’t tell me about “intention.” Please don’t tell me I willed this with my motherfucking dream board. This was work. That’s all. Boring old work. Maybe intention kept my feet moving, in the form of there’s enough of me that believes this is worth my time so I’m going to keep going, but most of the time I couldn’t see TOMORROW, let alone a “dream” or endpoint. I was just writing.

I decided I would only write when I “felt inspired” and that I would write two posts a week no matter what. It’s a good thing I only followed through on the second decision, because inspiration left sometime around the end of year 1, when I had exhausted most of the rants and raves and figured it was about time the world recognized its next literary genius.

But it wasn’t. Assholes.

“Nobody will ever read this. It’s a waste of time,” I’d explain to my husband Mac, usually on a drive home from somewhere, late at night, with all the kids asleep in the back, when it all feels a bit heavier than usual.

“No. Keep going. You’re a great writer. Aren’t you getting more subscribers each month?”

“Doesn’t matter. It will happen.”

Or he’d get fed up with me and say “Yes Janelle it is a complete fucking waste of time. Stop doing it. Shut the whole thing down.” 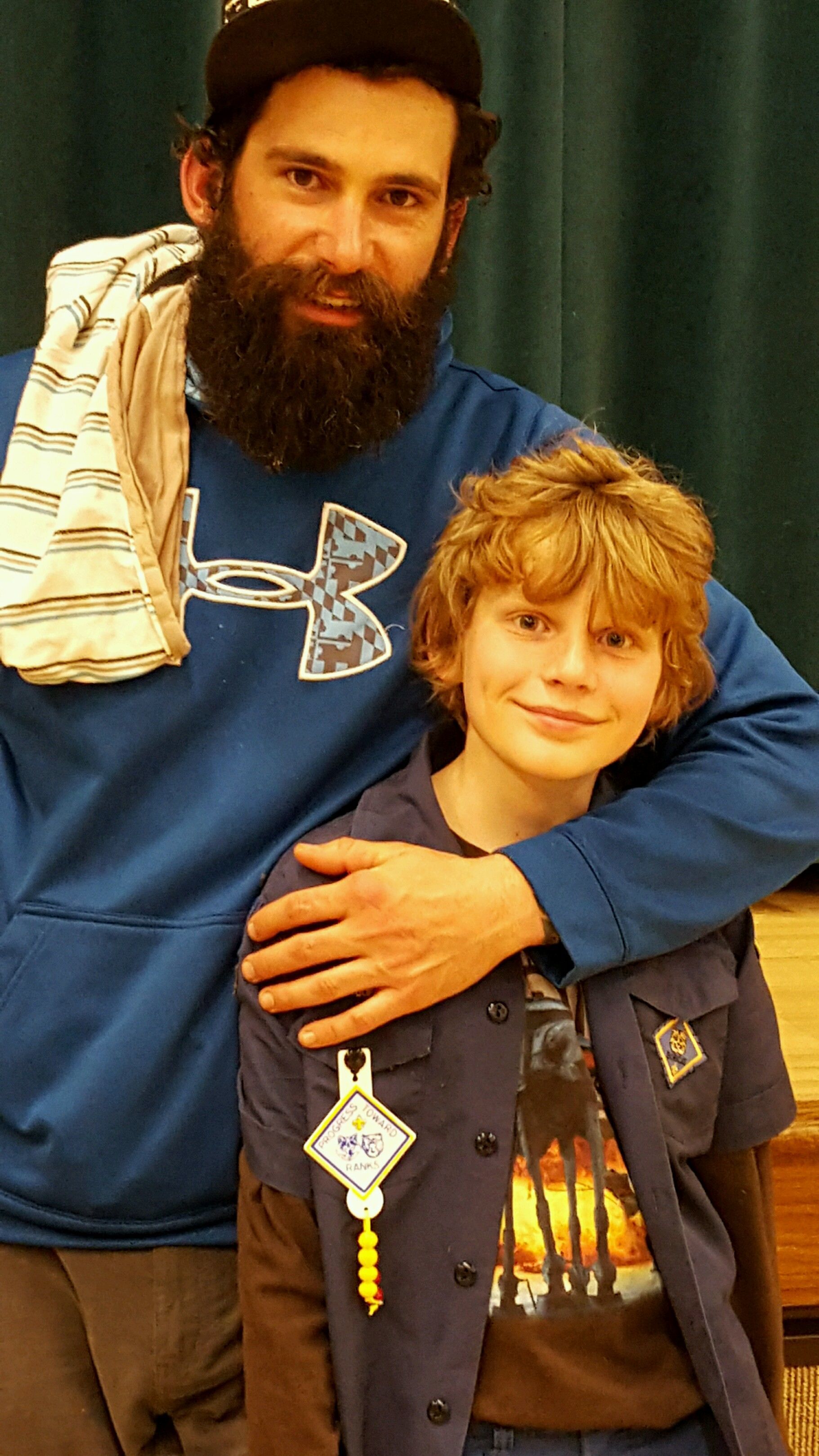 He’s still taking the kids out of the house so I can write. He did it last night. All 4 kids to Rocket’s Boy Scout event. I finished the proposal and sent it off. My mom sent me this photo.

No matter what though, I knew he thought what I was doing was valid and real because not only would he say it but he’d prove it with actions, taking the kids to the park so I could write, encouraging me to go to a coffee shop, helping me make “I need to write a post” a real and actual priority in our home. Even when I had 100 readers. Even when there was no money in sight. Even when I had a “real job” that had no writing in it. Even though it “took time away from the family.” Even though all of that, we just did it, together, he and I. I don’t really know why.

And you, the new reader, I’d cling to the message you sent, telling me this is the first time you’d ever felt seen as a mother. That you thought you were alone. And I’d think “Okay. I’m writing for her.” Even though there’s only like 10 of her.

And I’d do it again.

I wrote mostly when the kids went to bed. I’d write a post on the couch at night and then I would publish it and then I would go outside and smoke a cigarette* and read it over and find typos. Then I would fix them. Then I would go to bed and sometimes I could hardly sleep because I couldn’t wait to see the email notifications on my phone that somebody had commented. Every fucking one felt like a gift.

I couldn’t believe people were reading my writing. Strangers! Amazing.

If it was positive, I’d feel good about myself and interesting and capable.

If it was negative, I’d craft the perfect rebuttal in my head over the next 12 hours, finally type it, then regret it immediately.

I’ve come a long way since then.

But no matter what, I’d write again. I’d get back to work. Writing those two posts a week became a working part of my life and I just did it. Whenever. However. No matter what happened.

I’m not really sure. I guess because I had committed to do something and I got just enough attention to feed my ego so I kept going. I don’t know. Who fucking knows why we do anything?

I had something to say. I thought I’d lose my mind if I didn’t say it. Then nobody read me and I felt sorry for myself but didn’t quit. And when I wanted to quit I clung to the people around me encouraging me and one or two new readers. And then it kind of grew. And I quit my cubicle job and then the teaching job and now, here, 5 years later, I send off the final draft of my book proposal.

I wish writers would stop being so precious about writing. I wish they’d stop acting like there’s some system or routine or method that will Make You a Writer and that there’s a right or wrong way to do it. Just fucking write what you want to say and hope for the best.

When nothing happens, write the next thing.

When big things happen, write the next thing.

And keep writing and going until little by slowly, through events so mundane you don’t even notice them, you look around five years later and realize your life looks completely fucking different, and it’s all because you decided to write the things you thought about motherhood.

It matters only that a few like us in their bones.

*I have since quit smoking. Hallelu!

**There is no ** asterisk in this post. I just used that as an opportunity to tell you that this title is misleading. I didn’t start writing 5 years ago. I started writing when I was 9. I wrote damn near constantly until I was too drunk to do so. When I started again in 2011, I hadn’t written anything in 5 or 6 years (outside of academic shit), but it’s like riding a bike. I guess. I don’t know. I suck at bike riding. But it takes a long time to find your voice. I know that. It took me about 20 years, I think. So fucking write a lot. That’s my point.

Let me tell you a story about 9 strangers on the internet
"Mama, did you leave me on accident?"
Twenty seven days until this book enters the world. Here's what readers are saying.
Share566
Tweet
Pin
Email
566 Shares
79 Comments | Posted in what the fuck is a writer | January 27, 2016