I invented a pumpkin patch challenge. Maybe we failed. But probably not.

I love October and I love pumpkin patches. Can’t really explain why. Some things attract you for reasons unknown. Like Mick Jagger, for example. He’s not hot. And yet he is so hot.

Maybe it’s the simplicity (of pumpkin patches. Not Mick. I don’t know Mick that well.)

Maybe it’s the month marking the end of the relentless Central Valley of California heat. It’s still 80 during the day, but the nights. Oh god, finally the nights are cool.

It’s the rows of orange and the corn mazes. It’s everyone picking out just the right pumpkin. It’s the wagons. It’s definitely the wagons.

So this year, while driving by our favorite pumpkin patch announcing its opening, I told my kids with not a small amount of glee that we will be visiting the pumpkin patch nine times this year. George was all FUCK YEAH but my older kids were like “come again?”

“Yes. Nine times. It’s happening GET INTO IT.”

Then I called my husband and told him my idea and he too was into it because he’s beautiful and why have kids if you can’t mess with them. I decided seven times was enough. I posted on Facebook my brilliant idea but a friend told me he’d unfriend me if I didn’t do nine and since he posts the best photos ever of guinea pigs in capes I couldn’t let that happen. So nine it was.

I made up a hashtag called #kidpumpkintorture.

Mac and I calculated we would have to go twice a week. And we did.

We were TOTALLY ON TRACK.

For a week. One week.

Then we got strep throat. One by one.

We made up for it by going to three places in one day.

Then most of us got it again. That was last week.

Now it’s November 1. We’ve been to seven. Maybe we can get to a couple places this week, when they’re still open, or maybe we missed the goal of our made-up pumpkin patch challenge.

Seven is pretty good, though, considering we were sick for two weeks and my husband is home three hours a day five days a week. It’s been that way since February. I’m fucking tired of it. Over it. Done having our family torn up. Done feeling sorta alone. We’re a team, goddamnitmotherfuckers.

On trip #4 the baby bawled and wailed on the tractor. Sometimes Mac and I argued. Sometimes the oldest raged. Pretty sure the whole strawberry field heard me when I yelled “Get back here!” as she stormed off to the car. The 5-year-old lost her shit when Mac combined her half-eaten basket of cherry tomatoes with the other basket. We had to listen to that all the way to trip #6.

It was like everything we do as a family: So perfect in advance. So messy in execution.

Still, many evenings after work and school this month we’d look around at the crap all over the floor and dishes in the sink and say “Well we’re never going to meet our goal if we don’t go today.”

So we’d head to the corn bath.

It was silly. It was frivolous.

It was really freaking fun. Sorry. I can’t do my ‘adult’ work today because I made up a pumpkin patch challenge and I’m oddly attached to it.

That’s it. Just fun. Done for the sake of doing it. For the fucking hell of it. Because we can. Because it’s weird. Because we’re together and we’re a family and there’s NOT ENOUGH WEIRDNESS EVER.

It all feels redundant, you know? Monotonous. Yeah, I’ll say it: It gets BORING.

I drive. I cook. I clean I write I post on Instagram and it all looks clean and well-filtered and as promised. I wake up so tired my face hurts. My eyes burn. I stare at the road and my eyes blur for a moment. Another 1.5 hours of driving around picking up and dropping off kids. 17,345 loads of laundry.

Monday Tuesday Thursday another day week month. Fuck it let’s get lost in a corn maze.

It’s a small and maybe cliched thing, but as I walked out the door to spend two hours at a pumpkin patch with 150 other things “to do,” I remembered my power in creating my own reality, that we’ve got to throw some fucking nonsense into the mix.

So much reason, all the time. Work. Work. Pay bills. Repeat. Someone suggested I “live for the weekends.”

Oh fuck me sideways there’s not enough time for that. On earth. In life.

I guess sometimes I need to get a little ridiculous with the people around me, devote myself to made-up things, watch my kids’ faces as we drop responsibilities to meet the requirements of a “meaningless” invented Facebook challenge.

This wasn’t about my kids, though. This was about all of us.

As we walked in one of the last trips, I said “Aren’t you kids glad we’ll always have the memory of the Great Pumpkin Patch Challenge of 2015?”

The oldest two immediately responded “What do you mean? We’re totally doing this next year.”

So much for the torture portion. Oh well.

Why have parents if you can’t mess with them?

Really, why even be alive? 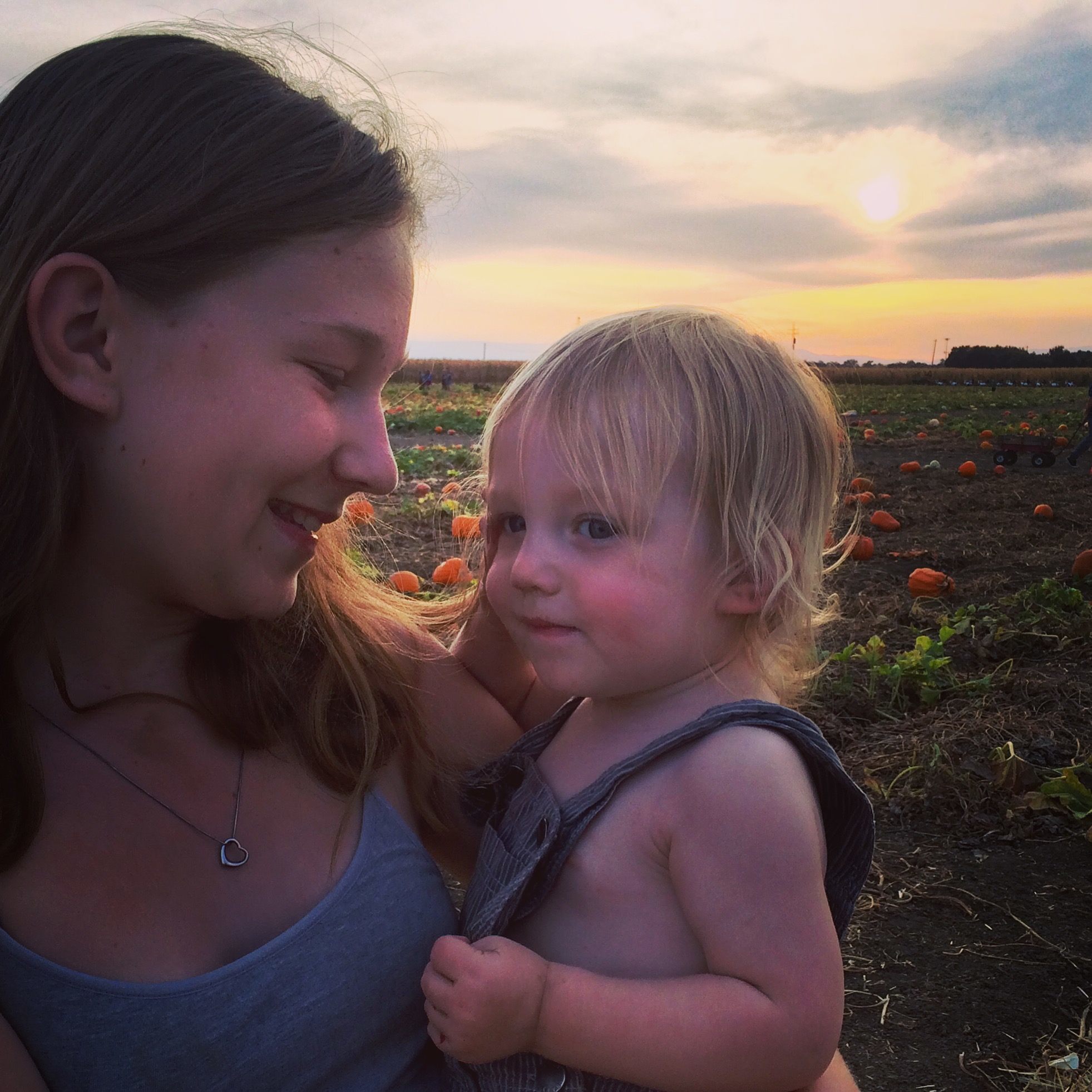 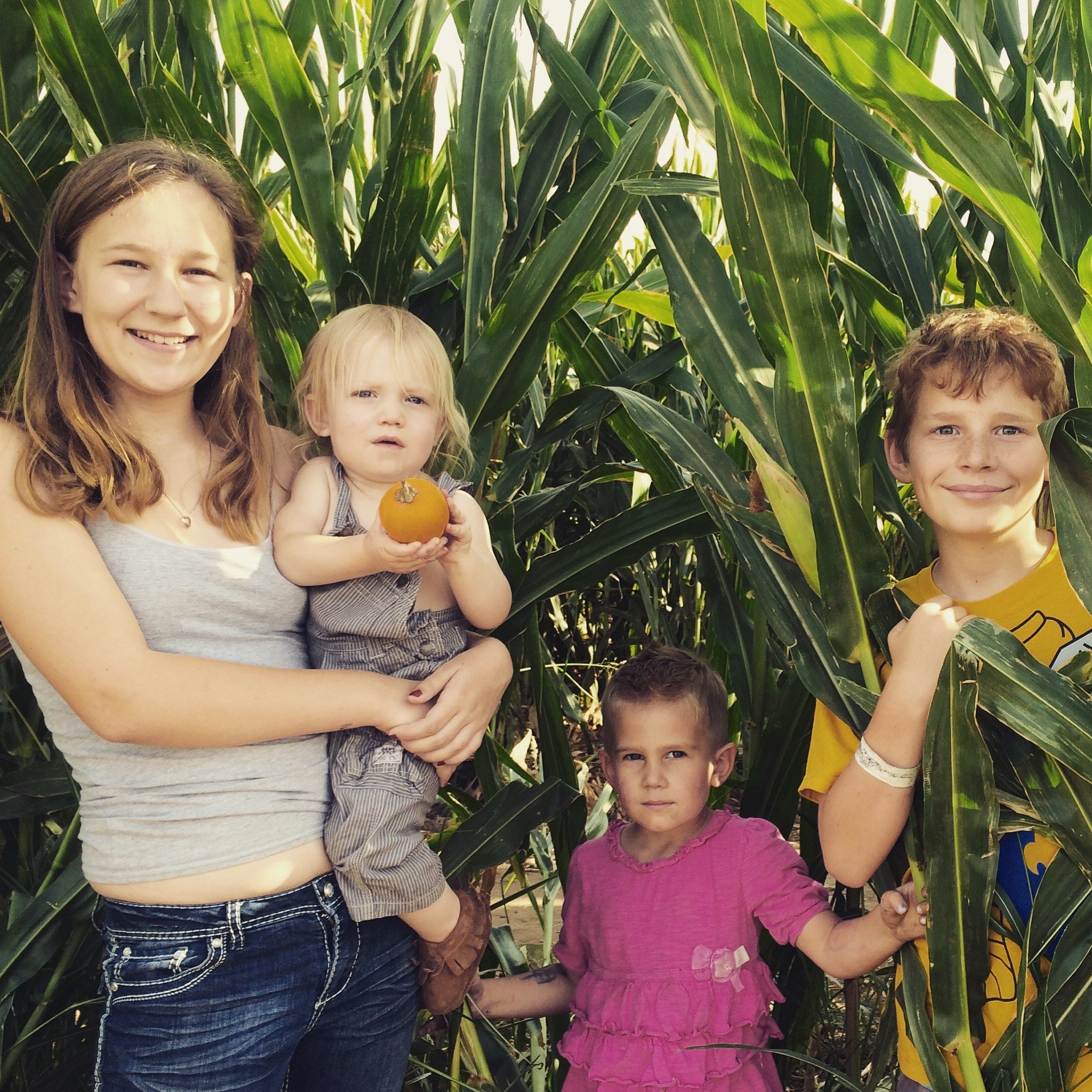 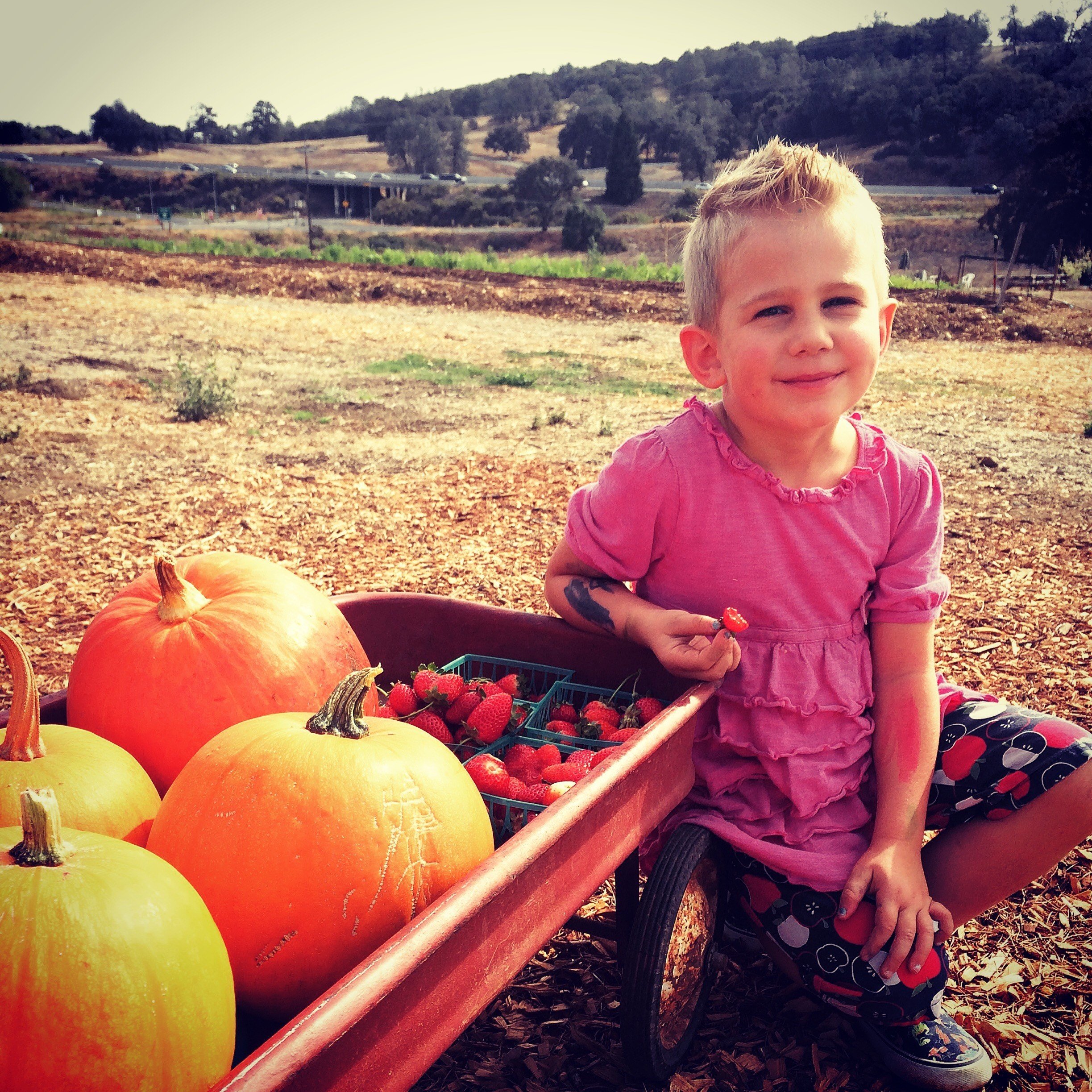 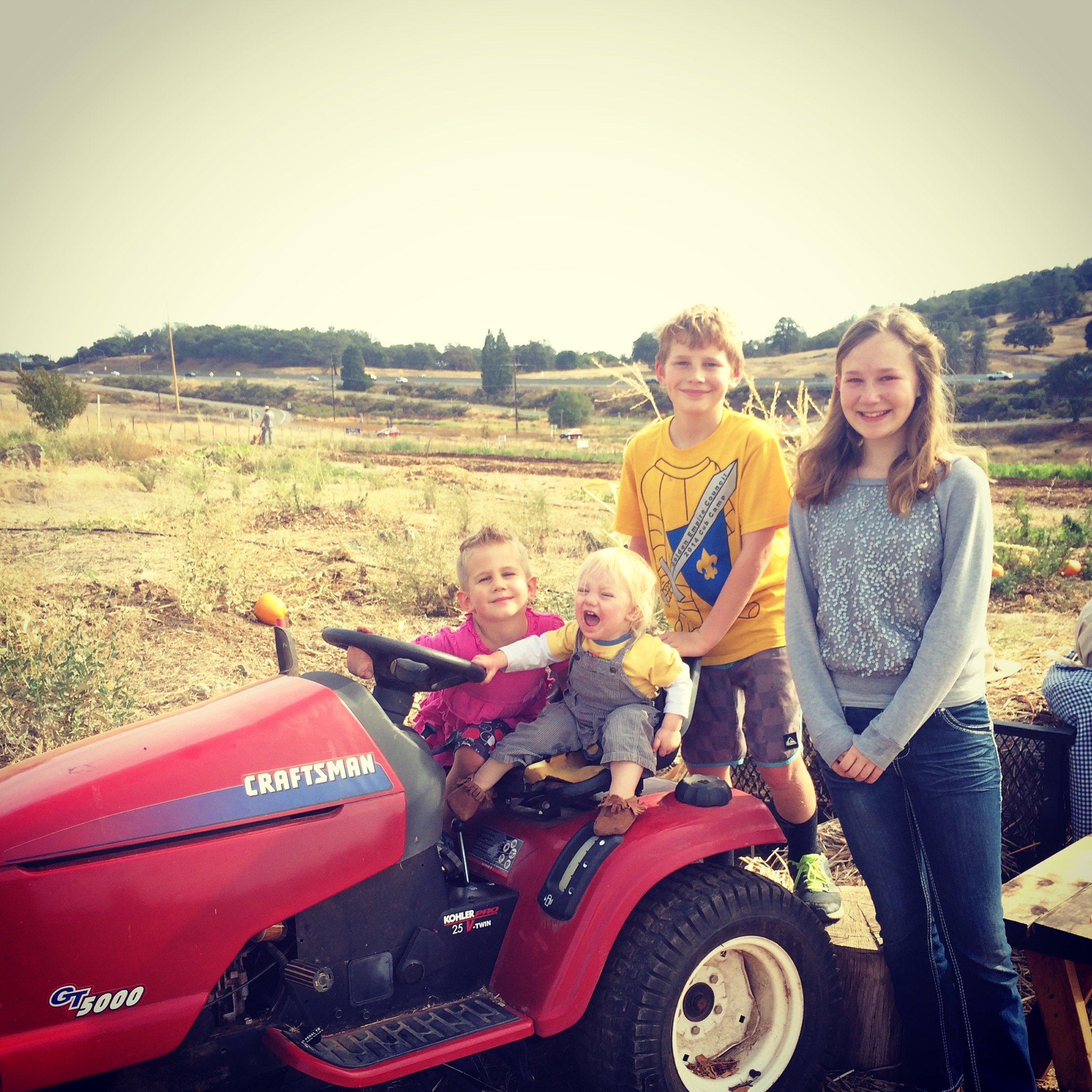 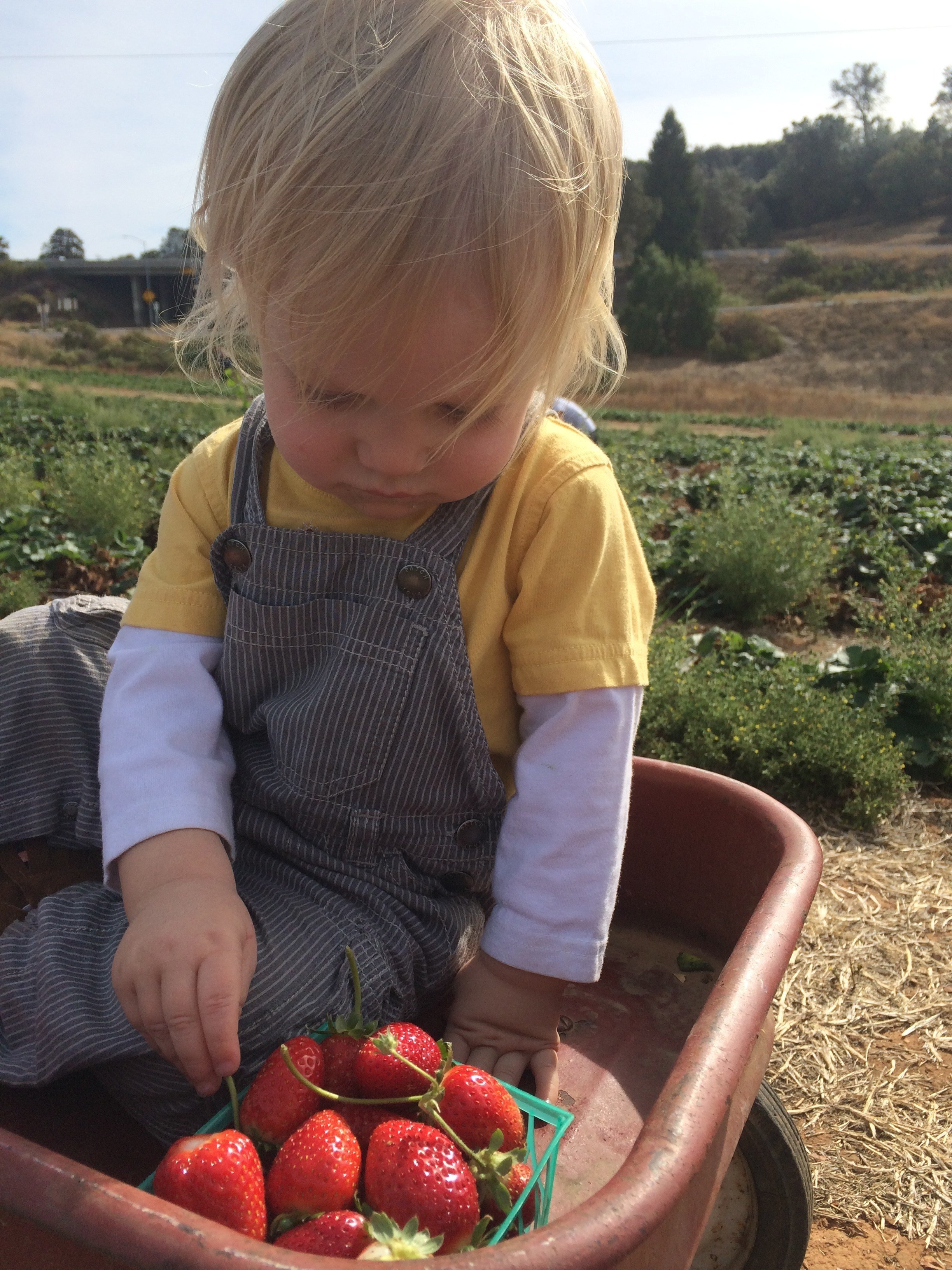 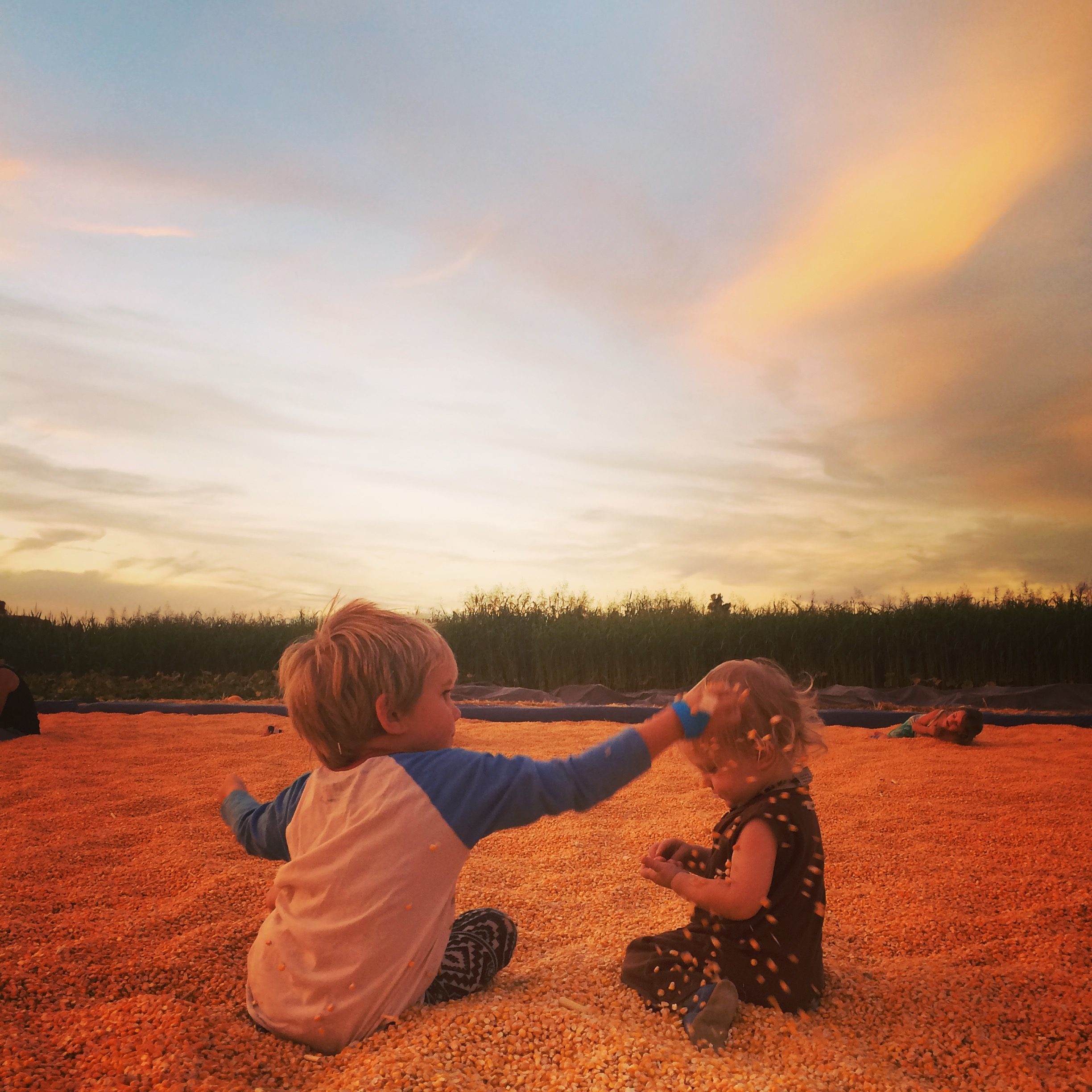 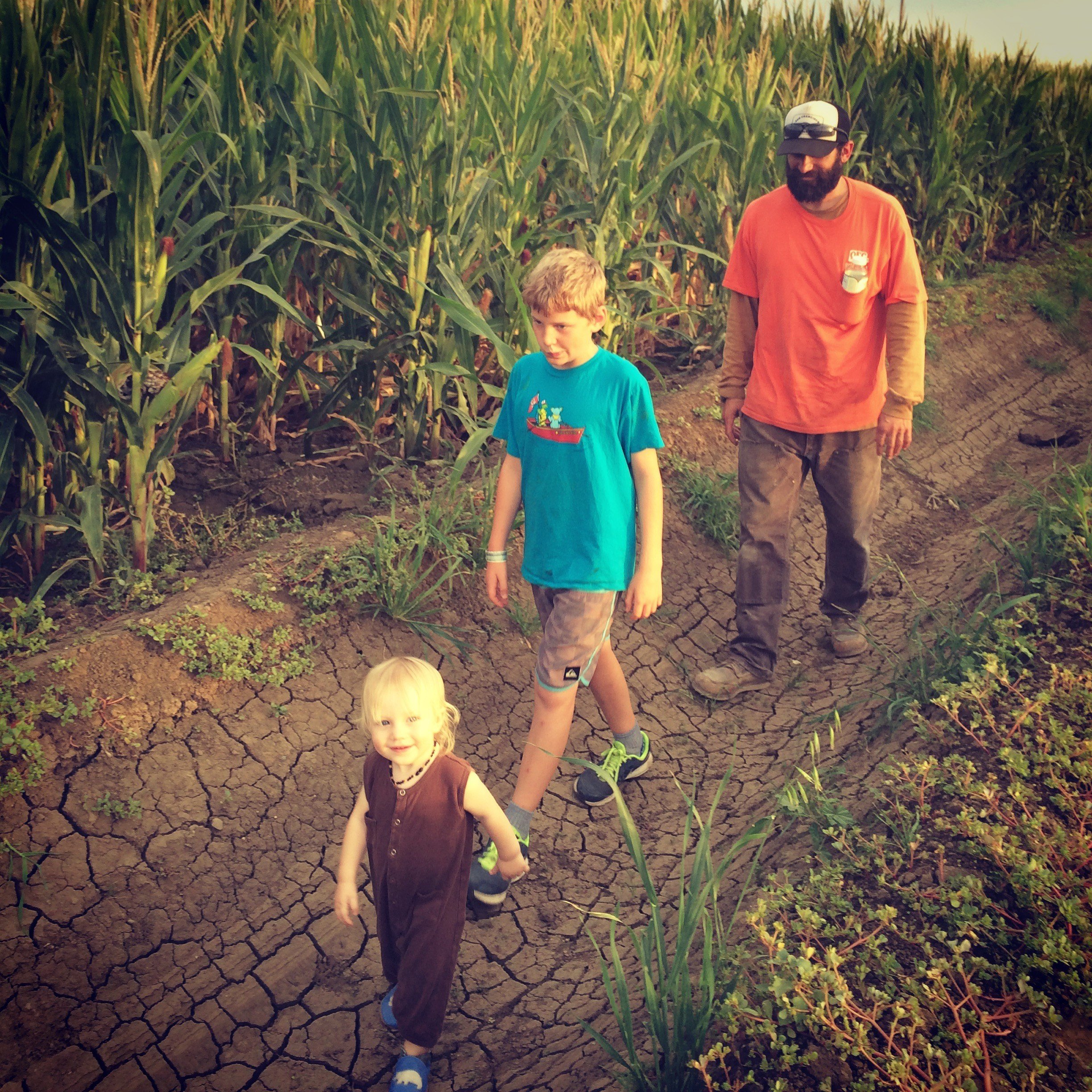 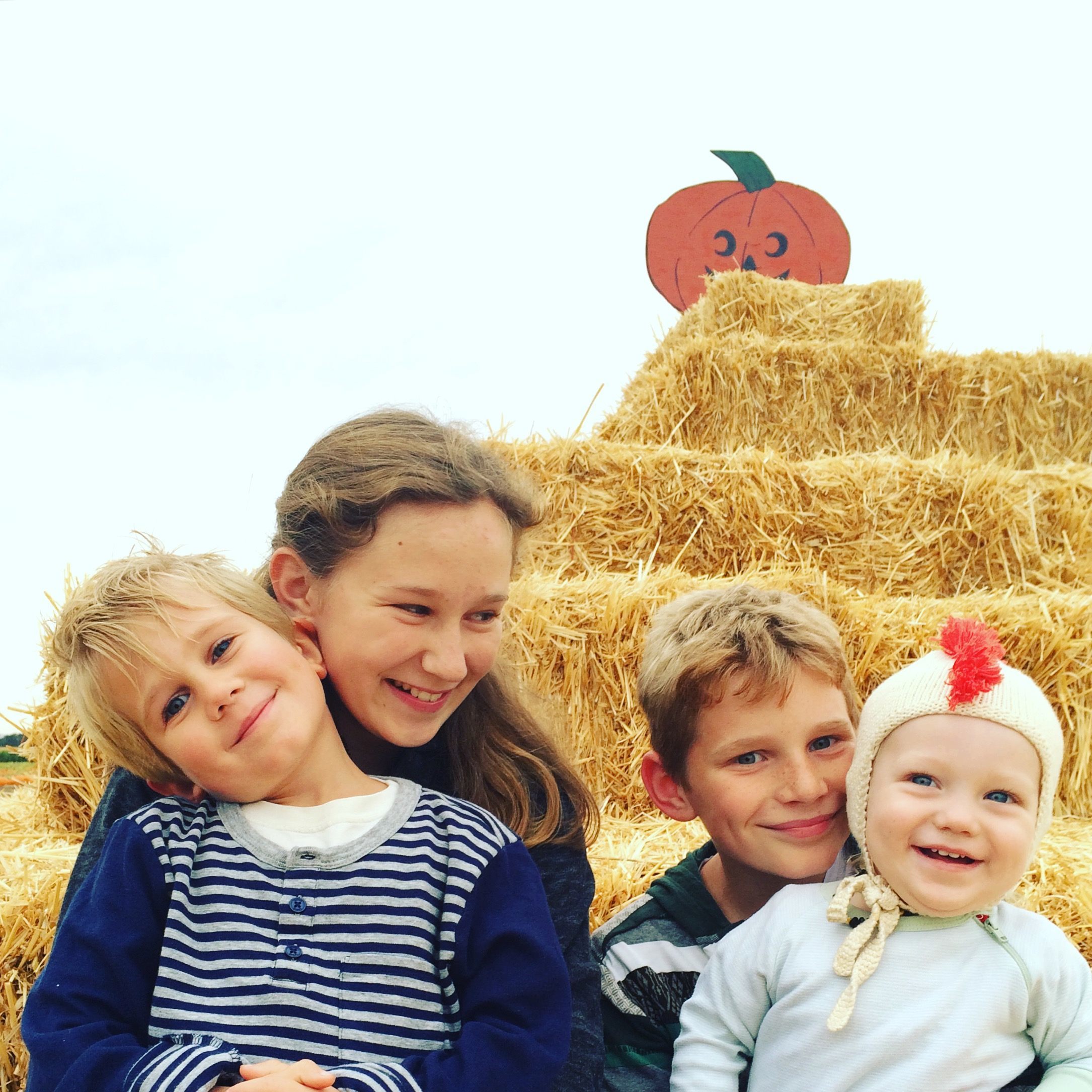 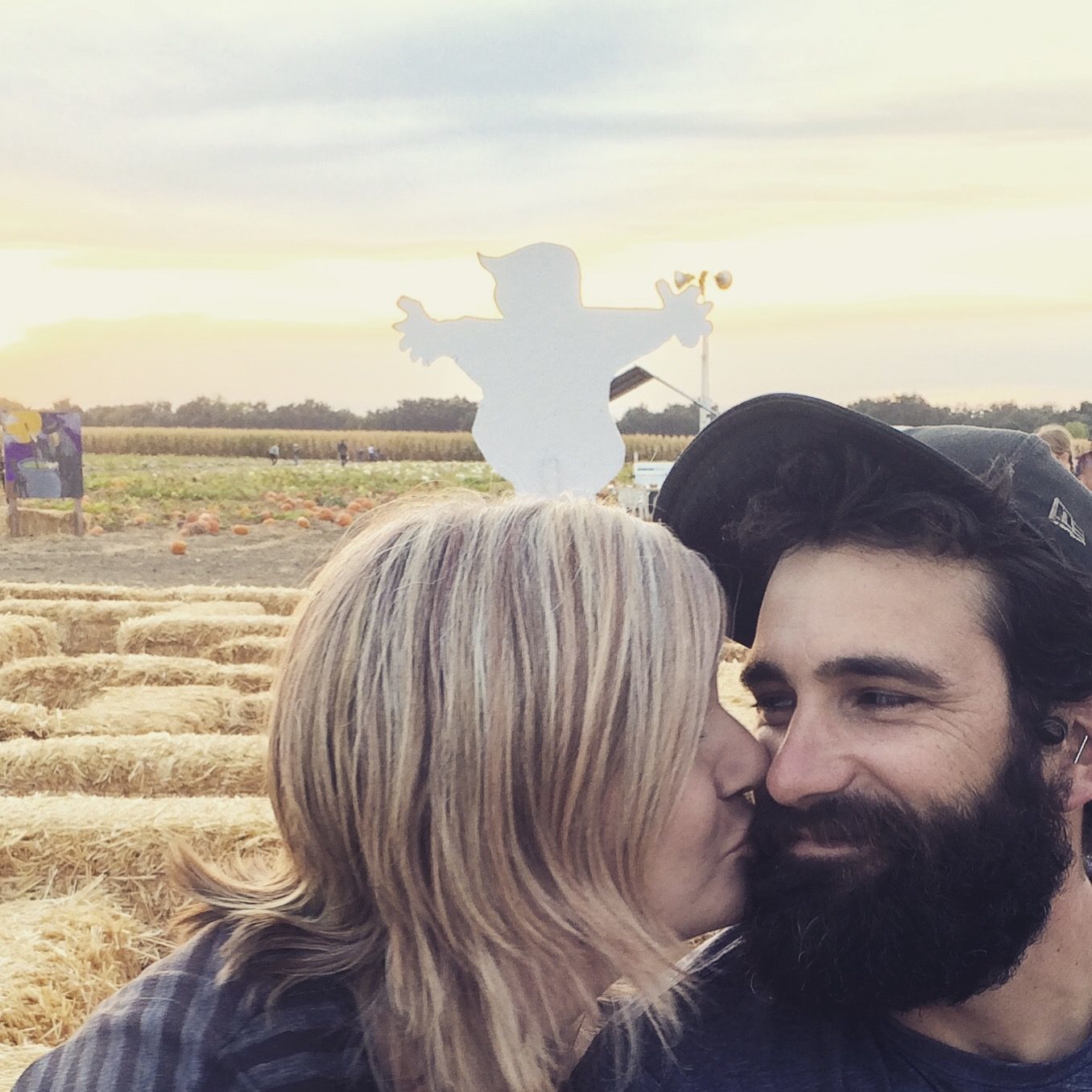 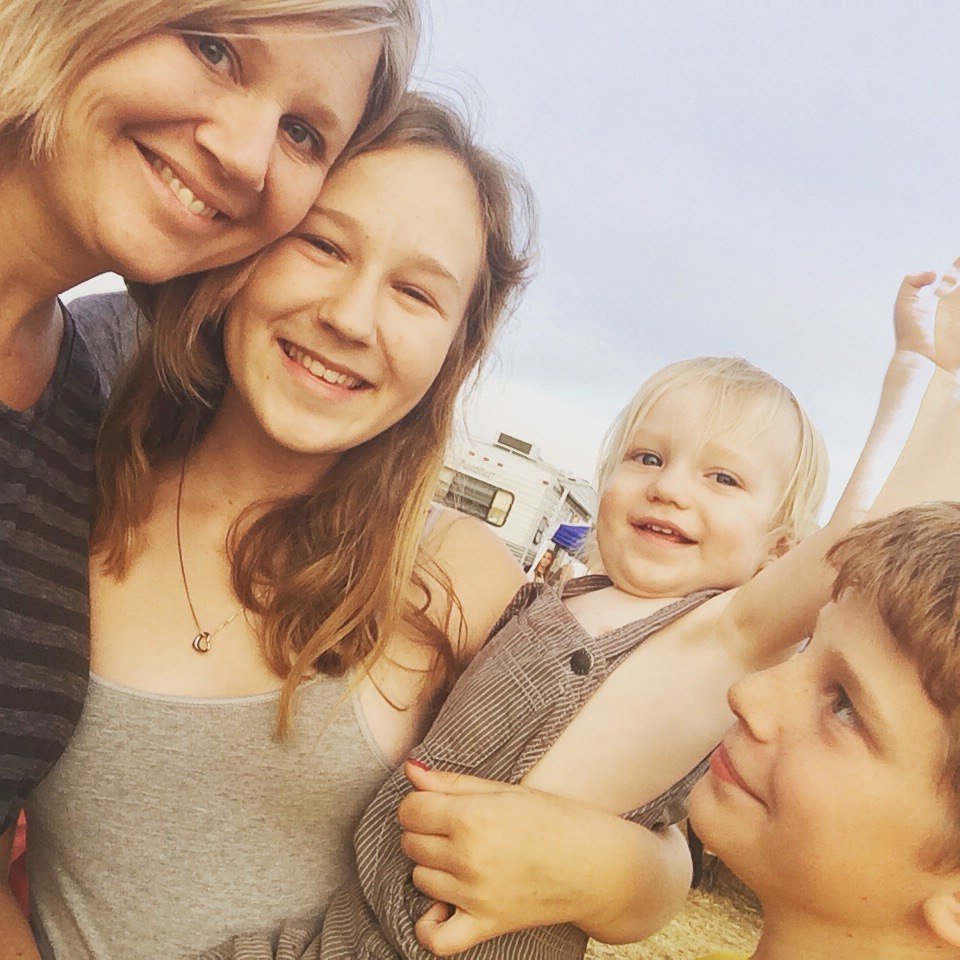 what I learned this week: rain, sundays, and why Mac doesn't suck
This week...we hung out with old friends we just met.
this week...I fell off a diet, and was thinking of my mom
Share411
Tweet
Pin
Email
411 Shares
37 Comments | Posted in weeks of mayhem | November 1, 2015